Frank Gibson Jr’s ‘Hardbopmobile’ has been around for a number of years and the band always delivers uncompromising hard-hitting performances. Gibson and Watson see to that. This no nonsense approach guarantees that Hardbopmobile’s music, even while traversing well worn standards, is fresh. This particular gig was titled ‘Hardbopmobile plays Monk’ and with the interesting addition of vocalist Caroline Moon (Manins) on vocals, it gave us much to enjoy. Familiar and lessor known Monk tunes appeared as the evening progressed. While all of Monk’s recorded material is perennially interesting and seemingly beyond caveat, in the right hands vibrant new interpretations are possible. This is the nature and Monk, the Picasso of modern Jazz; a modernist movement in perpetual progress.

Ted Gioia pointed out in his book ‘The Jazz Standards’, that only two composers of pure Jazz standards remain in ascendency.  One of these is Monk whose stock has risen steadily for many decades now. The other (and that has occurred more recently) is Billy Strayhorn. Both of these composers had an astonishing modernity about them. In spite of some beguiling melodies, neither offered the listener simplicity. What you get with Monk is often jagged and quirky compositions, but for all that his hooks snag deep. Listening to Monk you hear the sounds of New York. The broken lines and 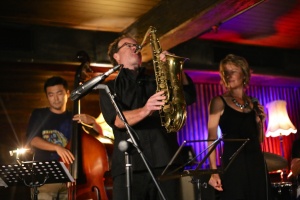 startling dissonance are echoes of traffic and street life. Very human sounds and offered from his unique vantage point. In spite of the difficulties life threw at him the music is somehow tender.  Monks was essentially a humanist voice.

Frank Gibson, Neil Watson, Roger Manins, Caro Manins and Rui Inaba gave us an enjoyable evening. At times boisterous and loud, but occasionally gently reflective (e.g.Ruby my dear). I was delighted to hear ‘Ask me now’ as it is all too often ignored by modern Monk interpreters.

Gibson has a driving incessant beat that never flags and this spurs on Watson who loves nothing better than asymmetric lines and chords that drop like IED’s. He told me that he finds Monk liberating. Roger Manins and Rui Inaba were the newer band members. Inaba kept the pulse secure while Manins adopted his usual approach which is always dangerous

Monk has been interpreted by vocalists before and most notably by Carmen McCray.  The last time anyone sung Monk at the CJC was Susan Gai-Dowling and that was three years ago. Hearing Carolina Moon (Manins) doing these interpretations I wonder that it is not done more often. Moon has re-written the Monk arrangements, adding vocal lines. Her ‘Carolina Moon’ (Monk/Moon arr.) is irresistible.  When this was composed in 1924, composers Burke & Davis must have hoped for a hit.  It rose in the charts twice and never more so than when Connie Francis sang it in 1958. I bet that they never saw Monk coming though. Turning the song on its head (no pun intended)and giving it that crazed bebop makeover. 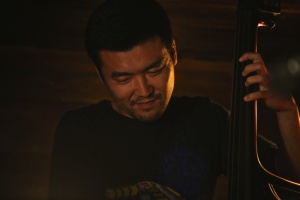 There was also a marvellous interpretation of ‘Epistrophy’. This also featured Moon who had cleverly added some slow rap into the mix. During her preparation for the gig she listened to a famous live performance of Monk doing ‘Epistrophy’. Her attention was immediately drawn to a number of irritating audience members, talking loudly through the solo. She then transcribed the banter and it is now integrated into the tune. This is not only clever but it is fitting and cathartic. Monk would have loved to see these talkative ghosts exorcised. Gibson asking Moon to join the band was inspired. More please.