When I saw that pianist Chris Cody was coming to New Zealand I immediately recognised the name. For a moment I couldn’t fill in the blank spots of memory but I sensed that the connection was both Australian and international. My CD collection is huge and I knew that the answer lay buried somewhere in the unruly muddle of music lying about the house. Then it came flooding back; Cody recorded a great ‘Chris Cody Coalition’ album in the nineties. The first international Jazz NAXOS recording titled ‘Oasis’ and produced by Mike Nock; an innovative exotic project brimming with warm middle eastern influences. Some quick

research told me that the Chris Cody Coalition was still an entity and what equally excited me was to see the name Glenn Ferris on several of the albums credits. ‘Oasis’ featured the Australian Trombonist James Greening and on several of the later Coalition albums Cody features trombonist Ferris (an utterly distinctive player). His whispers, growls and smears are at times otherworldly, but also mysteriously human. Cody works especially well with trombone players and his writing reflects this on the latest album.

I trawled the Paris Jazz clubs in the nineties and recall seeing Ferris perform. Later I picked up an album by Henri Texier ‘Indians Week’ and loved it. Ferris has appeared on 179 albums; everyone from Stevie Wonder (‘Songs in the key of life’), to a co-led album with Chico Freeman and an Archie Shepp album (‘Meeting’). The new Chris Cody Coalition album ‘Conscript’ is enjoyable from start to finish. An accessible album that bathes you in warmth and light. There is real intimacy about the recording, a feeling that you are 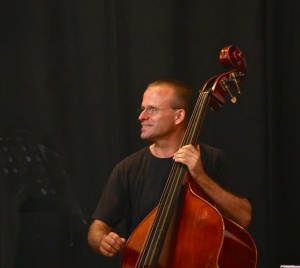 in the front row and this is as much about Cody’s writing skills as the strong confident performances. It is also about the recording quality which is superb.  I strongly recommend this album. I first heard the quartet at the Tauranga Jazz Festival. A CJC Jazz stage showcased the finale and the Jazz Tui Awards presentation. I spoke to Cody in a break and quickly learned that he had New Zealand blood running in his veins. Born in Australia of Kiwi parents he studied music before moving to Paris. Based there ever since and gaining a strong reputation on the wider scene. He has very recently move back to Australia but he intends to return to Paris to work periodically.

It is the diversity of life experience that makes for interesting Jazz musicians and Cody has the aura of Paris cool about him. While he 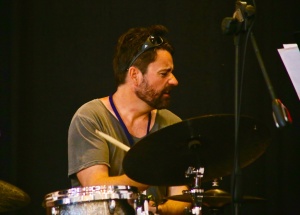 often draws on very American sources like Jamal, he is also in the mould of pianists like Jacky Terrasson (also a Parisian). Cody’s compositions are well thought out and replete with interesting asides. We heard many of these at the CJC and the album ‘Conscript’ is all originals. I am a sucker for a Cole Porter tunes and when he opened with ‘I love Paris in the springtime’ I couldn’t have been happier. Happy because I love the song and above all happy because the quartet played it so well. I have posted a video of the CJC performance and the title track from the ‘Conscript’ album with Ferris (the latter an official video release).

His pick up band are the familiar and popular Roger Manins (tenor), Oli Holland (bass) and Ron Samsom (drums). In the rush of the Tui awards there was little time to rehearse, but it didn’t show. This is 3/4 of DOG and they are the 2015 Jazz Tui winners after all.