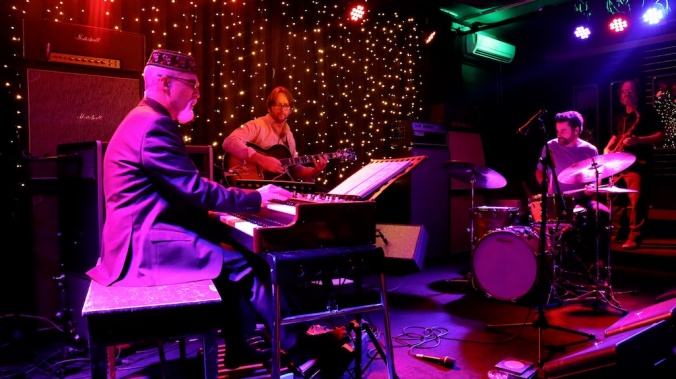 I reviewed the ‘Shuffle’ album in January and the band is now on the road, sharing its groove throughout the North Island.  As they passed through Auckland I attended the second gig, but this presented me with a problem as a reviewer. When you’ve already done a review, you don’t want traverse ground you’ve covered, and in addition, reaching for superlatives has its limits. During the live performance, the answer presented itself via my friend Stuart.  He and I have had this album playing constantly; in our cars and on our HiFi’s. In my case, I’ve sampled tracks on trains and while waiting in a supermarket queue.  It is that sort of album; addictive to a fault and quickly becoming an indispensable friend in times of need.  Last Wednesday we listened to the first number and as the set progressed, Stuart nudged me and whispered. ‘These are standards to us’ and he was right.

We knew the head arrangements off by heart in the way you do for Stella or Autumn Leaves; everything internalised and ready for triggering before a single note was played. We knew the track order, we knew the rhythms – the tunes and arrangements. There were no official standards on the album but that was immaterial. The Shuffle tunes are memorable, danceable, filled with melodic hooks, and our minds raced ahead of the lines in anticipation; delighting at each newly improvised line; mentally comparing them to the album forms.

This is what happens with Jazz standards. We love the originals but we never want to hear a band slavishly repeating the material note for note. The crazier the interpretation the better. Performing mental gymnastics during an intro and gasping in delight as a key phrase or line hints at the destination.  That Roger Manins, Ron Samsom, Michel Benebig, Carl Lockett and stand in-guitarist Neil Watson achieved this with an album of originals was remarkable. Naturally, such a singularity is not a lucky accident but the result of good compositional skills and fine musicianship. In a troubled month, we have all needed good-hearted friends to lean on and what better friend than a Shuffle. Lockett is temporarily lost again as he wisely has no engagement with social media. Having Watson step in was inspired, as he brought the core Shufflers a new perspective. Crisp drums, deep organ grooves, stinging blues, and crazy horn lines. Shuffle is a wonderful band and I have no doubt that they will bring pleasure for years to come. An assembly of ’emerging standards’ winging their way across the land and demanding acceptance for what they are.

The January Shuffle Album review is on this blog site or located at https://jazzlocal32.com/2018/12/18/shuffle-manins-samsom/

Definition of a Jazz Standard: Part of the repertoire of a Jazz musician, compositions widely known, recognised by listeners and played often by Jazz musicians.  Maybe Stu and I are not alone here.  These tunes will be performed often and when others recognise them as we do – they will become standards.