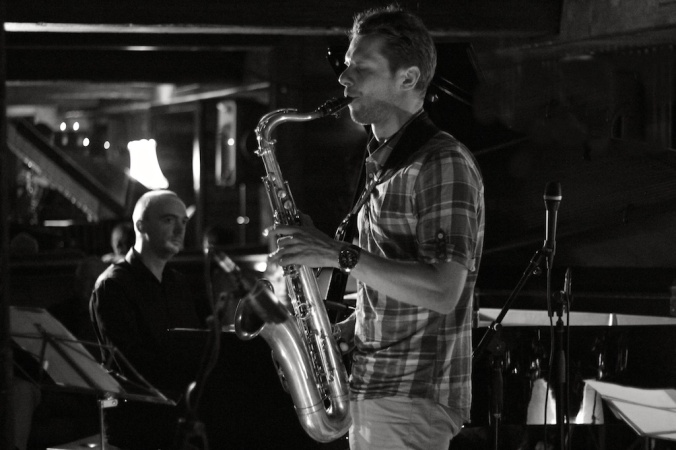 Auckland’s CJC (Creative Jazz Club) hosted two European Jazz Acts in as many months.  The most recent band ‘No Square’, is from Switzerland.  This is a top rated European unit who have been together since 1994 and their tightness, focus and intuitive interactions reflected that.  Having played many European festivals to acclaim, they ventured further afield, assisted by the Francophile cultural organisation the Alliance Francaise.  Michel Benebig is another artist often supported by this worthy organisation.

The journey down from Europe is particularly gruelling and even with New Zealand gigs tagged onto an Australian tour it requires a big commitment from the musicians.   I am not sure whether New Zealand audiences always grasp that.   After hearing about how poorly attended the Wellington ‘No Square’ gig was I cringed in embarrassment.   This is a truly amazing band and they deserved the respect of an attentive and decent sized audience.  Thankfully the audience at the CJC was reasonable, (but it could have been better).  If we don’t support visitors then why should they support our musicians who travel?   It is too easy to blame the lack of promotion, as our web-based and word of mouth networks are generally sufficient to pack out gigs.   All that’s required is a commitment to get off the damn couch.   Roger Manins goes to great effort to organise offshore acts and the audiences must respond in kind.  If we love this music we should pay it the respect of attendance.

Europe has been deeply involved in the Jazz world since the early 1900’s and it was so popular that Hitler banned it as depraved.   There could be no higher recommendation.  Euro Jazz is not a slavish imitation of American Jazz, as each region has developed distinct flavours of their own.   This is particularly pronounced in the Mediterranean region and with the ebb and flow of migration the process has accelerated.  France was arguably the original centre of Euro Jazz but her near neighbours Switzerland, Spain, Germany, Belgium, UK and Italy have all contributed significantly to the development of the music.  This band originates from French-speaking Switzerland, with their most recent album recorded in beautiful Lausanne on Lac Lemon.    While they referenced Coltrane it was also evident that middle eastern rhythms and themes informed their work as well.   This well-travelled band is extremely tight as a unit.  Whatever twists and turns the music took they intuitively coalesced around each new theme.   No charts needed here.

The first few numbers were denser and more complex than what followed, but as the evening progressed an airy feel and a deeper groove established.   I could discern many European and American influences from Debussy to Coltrane.  This distinctive original music was Euro Jazz at its best.  Andre Hahne (bass) took care of the introductions  (presumably because he has more English than the others), but the band is billed as a collective of equals.   It would be impossible to single out any particular musician as they all shone in one way or another.   On saxophones was Matthieu Durmarque, piano Matthieu Roffe and drums Alexandre Ambroziak.

This was not a night to miss.

What: Their 8th Album ‘The Laws of ephemerae’ (Les Lois de L Ephemere)