The more I listen to Alan Brown bands, the more I realise just how original his music is. The gig promised to be a reprise of ‘Between the Spaces’ and that was a drawcard which pulled in a good audience. We soon realised however that we were getting a lot more. As well as the familiar there were new compositions and a few that had not made the cut for the album. Brown is an extraordinarily gifted musician and in settings like this he always sounds fresh. The familiar numbers sounded as exciting as when we first heard them and the unfamiliar held the attention with siren like allure. This is music to gladden the heart.

There is a definite Alan Brown sound and it is quite unique. Yes there are small nods to familiar groove bands, to prog bands and perhaps even EST, but the sound is unmistakably his. Browns intros often favour the ostinato, with bass and drums working tirelessly across his insistent rhythmic patterns. These woven threads of sound create a layering effect. You are seldom aware of the underlying complexity, the odd time signatures and the oblique shifting grooves. Like many a well composed, well executed jazz tune, an implied centre holds the attention and this is where the ear goes. This is complex music made 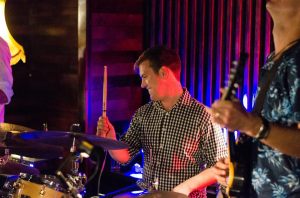 accessible. As the tunes unfold you fall into them, feeling that you are on a journey of logical progression; the enveloping arms of groove guiding you inexorably towards some beating voodoo heart.

The musicians Brown uses are always chosen with care. With arranged music and exacting charts, the having the right line up is important. It was great to see Andy Smith back at the CJC. Like Jono Sawyer he was on the 2011 ‘Between The Spaces’ album. Smith has something of the rock god about him and as his solo’s soar he often leans back, as if giving the notes more room to fly free. He is technically proficient and an interesting soloist; often putting me in mind of Mike Moreno as the sound is similar. His approach is modern but the history of jazz guitar still speaks behind his solo lines. Jono Sawyer is a member of various Alan Brown units and he is very much at home in this configuration. His time feel in these groove based settings is immaculate.

The relative newcomer is electric bass player David Hodkinson. He is no stranger to Brown’s bands but he was not on the album.  it would be daunting to step into Marika Hodgson’s shoes but Hodkinson held the groove and punched out a mesmerising pulse.

Alan Brown makes no apologies for referencing the fusion prog Rock/Jazz era. On Wednesday he mentioned the innovative and almost forgotten ‘Focus’ (an admired instrumental group of the 70’s who often featured Jazz guitarist Philip Catherine).  Among a selection of great tunes, my hands down favourite was a prog tribute to ‘King Crimson’ named ‘Crim Kingson’.

The photographs are by Ben McNicoll of the CJC management and the audio clip is ‘Do not track’ from the ‘Between the spaces album’.