I clearly recall the first time I heard Steve Barry. It was around eleven years ago at the1885. He was not long back from Australia, bringing with him bass player Alex Boneham and drummer Tim Firth. At that time the Creative Jazz Club was located in a dark atmospheric basement; an ill-lit venue bordering on gloomy and perfect for a Jazz club. You would grab a drink, sink into a well-worn leather armchair with broken webbing and wait for the band to begin.

The music that night was unforgettable. Somewhat denser than I was accustomed to at the time, but never-the-less fully engaging and exciting. When the second tune was announced I pushed record on my iPhone because I knew that I was hearing a piece of music that merited further attention. It was a tune that he was working on and it would appear on his first album a short time later. That was the year of Aaron Parks and his Invisible Cinema, and Barry’s tune was titled ‘Parks’. I listened to that phone clip an awful lot over the following months and I could hear the future.

Each time Barry has appeared in New Zealand he has showcased fresh ideas. He is a forward-thinking and innovative composer/pianist and as such he never rests on his laurels. Although born in New Zealand, Australia claimed him long ago. He is popular there, has obtained a doctorate and awards there and teaches at the Sydney Con. As expected, he brought us new compositions this visit, but as I listened I was also reminded of that first gig. While he moves on constantly and is not composing or playing in the way he did back then, there is still a hint of that younger player. Of past learnings gathered and picked through as he builds fresh iterations, crafted in part from the bones. I am not surprised that he studied with Craig Taborn.

His compositions are no doubt demanding and require good responsive players. He had assembled just such a crew for his CJC Anthology gig. Callum Passels on alto, Cameron McArthur on bass and Ron Samsom on drums. Local musicians of the highest quality. Passels has a gorgeous tone, but what sets him apart is his ability to push at the boundaries. His best work occurs when playing compositions that afford him certain freedoms and these compositions worked well for him. At times he would run over the lines which contrasted nicely with his tight unison playing. The sort of advanced musical thinking I associate with Warne Marsh. Perhaps because this was a quartet, the music also felt more spacious. The density and serialism were still evident but as always with Barry, there were fresh vistas revealed at each turn.

JazzLocal32.com was rated as one of the 50 best Jazz Blogs in the world by Feedspot. The author is a professional member of the Jazz Journalists Association, poet & writer. Some of these posts appear on related sites.

At some point in human evolution, the majority of humans decided to stay put. In consequence, the hunter-gatherers and the pastoral nomads became outliers. As civilizations grew, agriculture grew and large enclosures and granaries grew along with them. Beyond the walls and the jumble of enclosures; largely unnoticed, often unseen, foraging continued unabated. The homeless on the streets forage, philosophers forage, writers forage, wild and domestic animals forage and above all improvisers forage.

Martin Kay’s gig was a tribute to foraging; highlighting the activities of foraging animals, creatures large and small and to the improbable life lessons, they impart. It was about cultivating absurdity and profundity in equal parts, it was about following the ancient herds using postmodern skills. It nibbled at reality until you saw it afresh, building on overlooked narratives, finding the things we often miss; a Zen Koan wrapped in sound.I first saw Kay in 2013 with ‘Song  FWAA’. The post from then and the accompanying sound clip is still available on this site (use site search, type in Song FWAA). 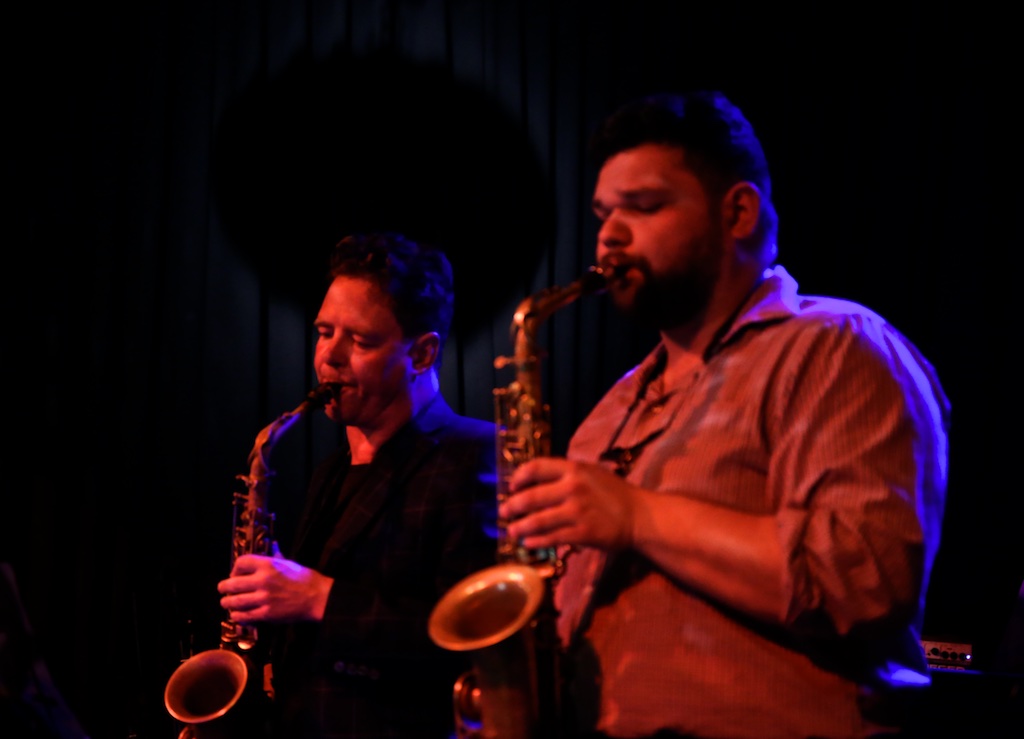 On Wednesday, his charts were for a larger ensemble. This time offering fresh insights; taking us further down the Rabbit hole. The pieces were of variable lengths and sometimes in parts. At some point during the second set, he played a piece titled ‘Ligeti’s Goat (I first heard that back in 2013). While the piece has melodic hooks and a basic structure, it is more, a surrealistic journey. A place where imagining, spoken narrative and musical narrative meet. Ligeti’s goat is vividly embedded in my memory; it is not a piece easily forgotten, a goat wandering through pastures, locating carrots (perhaps forbidden carrots), digesting the vegetables in that mysterious way of all ruminants.

There was a piece titled puffer fish, another called ‘Thrice mice’ (that chart in a minuscule script like mice prints) and a vampire piece titled ‘Once bitten once shy’.  There was also an appealing piece about a tracker dog, selling his skills to those who might have need of them. None of this was an invitation to anthropomorphize – Kay’s animals spoke for themselves. He spends much of his time in New Zealand these days as his wife works here. For this project, he selected a group of local improvisers to form the ensemble; younger players with an open approach to improvisation. In this respect, the location favoured him, bringing the gifted Callum Passels into the group. Also featuring Crystal Choi, Michael Howell, Eamon Edmuson-Wells and Tristan Deck; each one of these having a stake in explorative improvised music. The only non-original piece was ‘Turkish Bath’ by the innovative trumpeter Don Ellis. For material similar to Kays, you need not look any further than Ellis or perhaps Henry Threadgill.  It is good to have Kay in our midst, as he’s an interesting, often challenging and worthwhile composer. I have put up two clips – Turkish Bath and narrative about the Tracker Dog. 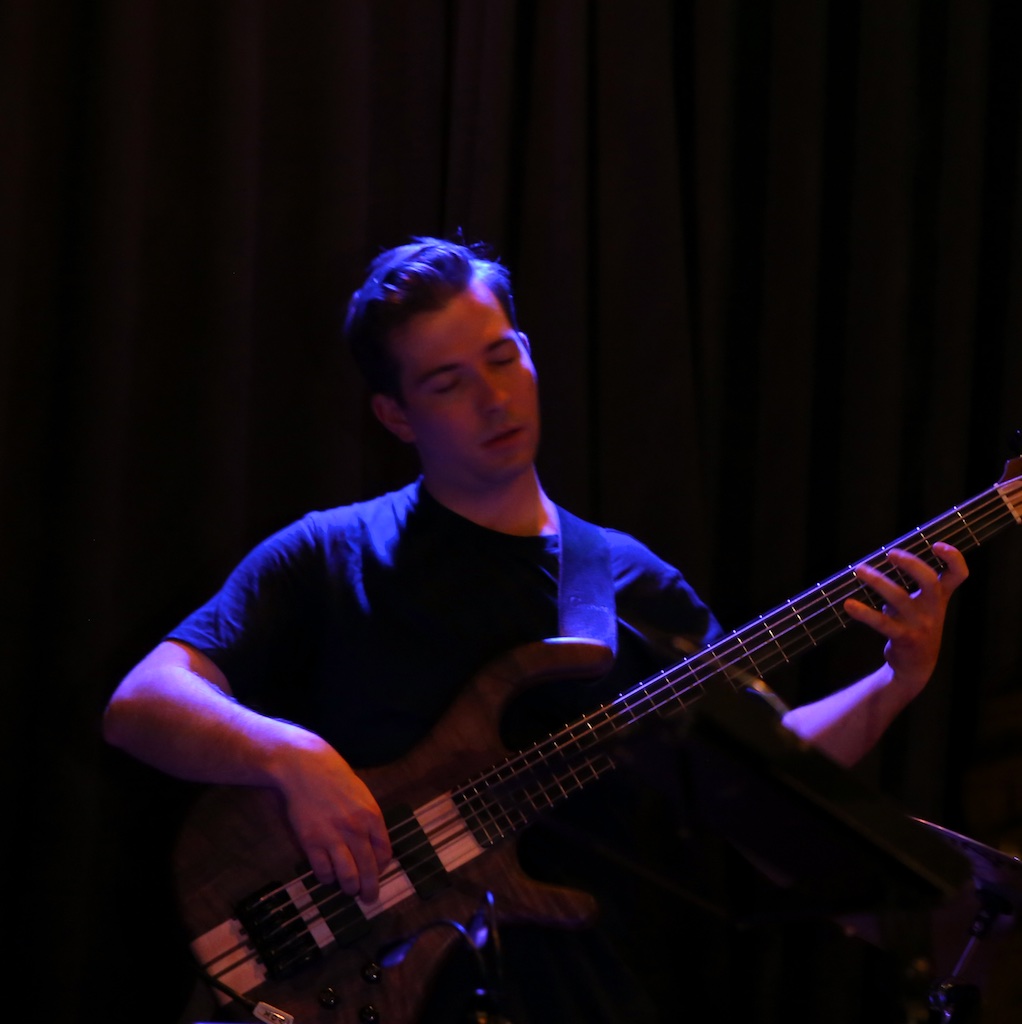 Dennison is a first class musician and someone we don’t hear nearly enough of on the Jazz circuit. He rarely gets to the CJC but when he does it is always a treat. These days he is mostly found doing session work or backing visiting artists and it is hardly surprising that he is a bass player of choice. Whether on upright bass or electric bass he is equally proficient; always an engaging presence, always demonstrating a deep musicality. He has one more string to his bow which can’t be overlooked and that is composition. His tunes are often whimsical, but whatever the mood, a deftly crafted structure sits beneath every phrase. Never over done, bass driven and just right. There is also a thread of melancholia and wistfulness in his ballad writing: these are difficult emotions to evoke and anyone with knowledge of poetry will know, that only the most skilful poets do the moods justice. Dennison can. 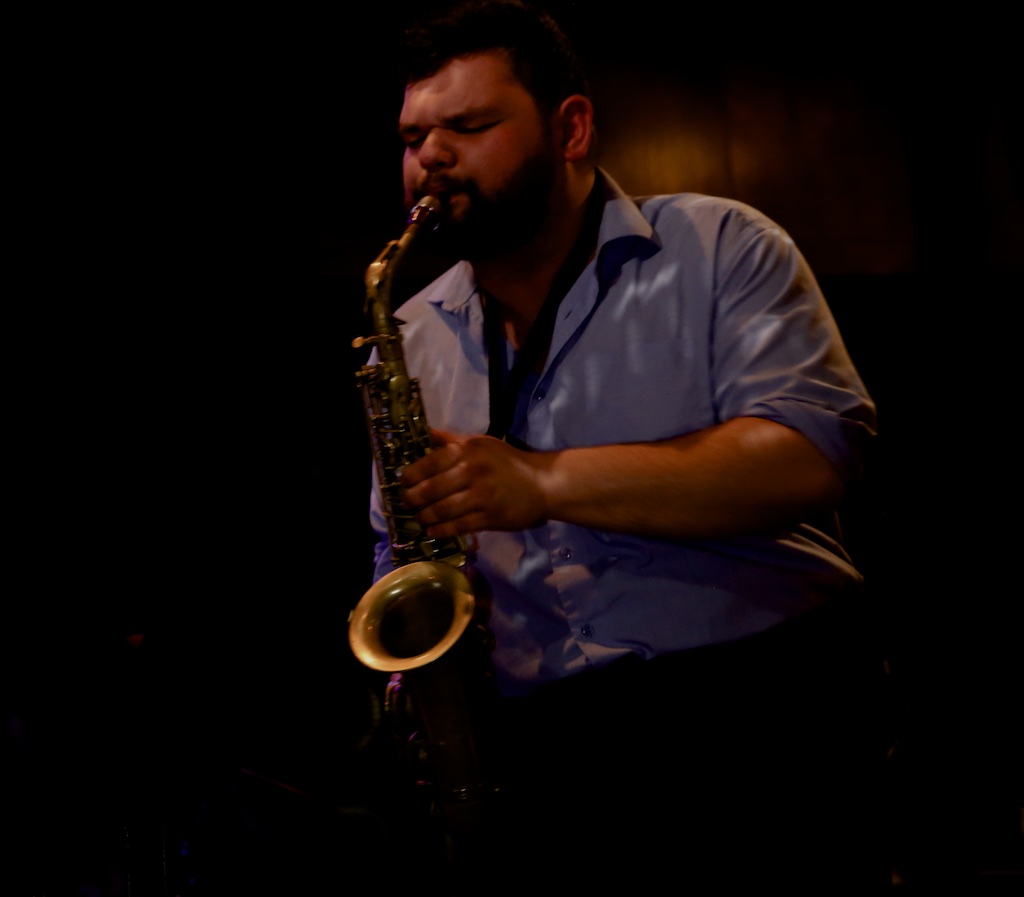 Passels playing was another high point of the evening for me. He just gets better every time we hear him. He is also exactly the right person to interpret mood. I liked the way he approached the tunes, working his way inside them methodically. Sometimes angular, at other times teasing at the melody. During the ballads, he often began with sparse phrasing, establishing mood without overstatement; then, slowly telling his story as if looking at the theme from differing viewpoints. Although he plays decisively, he carefully modulates; generally without flourish or vibrato – pushing at a note until subtle multiphonic textures form – his paper-thin Konitz-like tone saying more than any honk. His versatility is also an asset. Any player who can comfortably move outside and inside while still maintaining a theme is a person worth listening to. 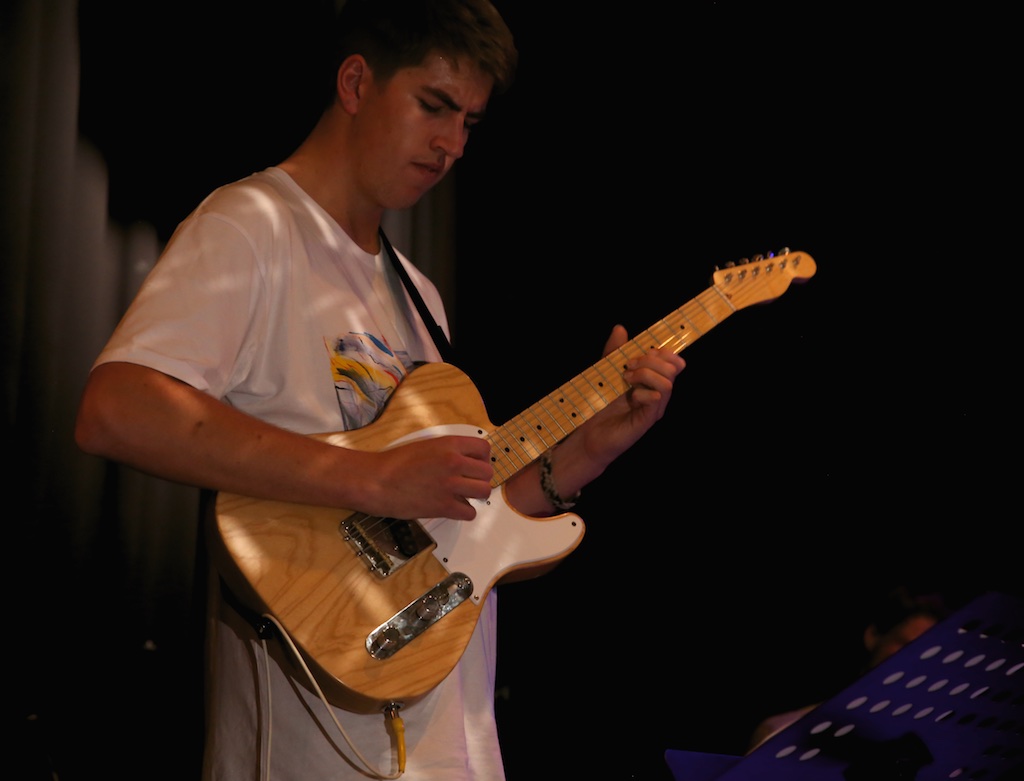 McAneny, who initially faced a cable problem, overcame it quickly and delivered a fine performance. Having a Rhodes and a guitar together can be problematical, but the charts and McAneny’s nimbleness enabled him to avoid crowding the space. Howell gave a nice performance and his lines are terrific; He knows what he’s doing but I’d like to hear him bite into his solos a bit more. Drummer Adam Tobeck was on solid ground with this group, he obviously enjoyed the company and reacted well to whatever was thrown his way. After not playing here for a few years, he is now a regular on the bandstand. I like his drum work very much.

Dennisons post-Zoo material is terrific. Fresh, adventurous and deeply appealing. I hope this gig presages a ‘Zoo Two’ album (or ‘Zoo Two by Two’?).  From Zoo we heard ‘The Cat’ – of the newer material there were many great pieces – I loved ‘Unkindness’, also the punkish take on the Beatles ‘Day Tripper’ and ‘J Y Lee’ (a contrafact of ‘Donna Lee’ which in turn is a contrafact of ‘Indiana’).