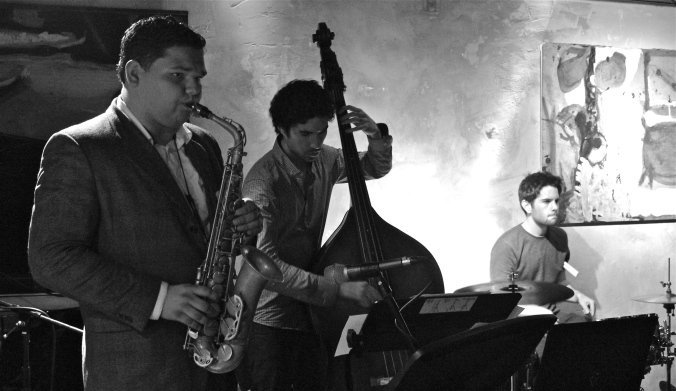 A few days ago the CJC presented the Callum Passells group.   Callum is a third year student at the Auckland University School of Music (Jazz Studies) and so are his band mates.  If anyone harboured the briefest thought that this group should be cut some slack on account of age or experience, forget it.   What we saw was a slick act, a great programme and the sort of discipline that generally comes with seasoned performers.   This band did the business and they held us in the palm of their hand throughout.

I had only seen Callum perform a few times; once at a house party and once during a jam season.  Those brief encounters had not been enough for me to form a clear view of his abilities and so I arrived with an open mind and no fixed expectations.   I now recall Roger Manins saying that Callum was a terrific saxophonist and that he had the hunger to succeed.  That should have clued me up.

Callum is a very nice altoist and his tone is as sweet or as hard-edged as the tune calls for.  Once in a while I could hear a hint of Cannonball Adderley.  Not a copied lick, but more of a bluesy swagger and the stuttering way that he would burst into a phrase.  During one such moment I must have uttered the word ‘Cannonball’ to myself.  The person sitting next to me suddenly said, “yeah, I heard that too”.

The band was well rehearsed and they had paid attention to the smallest of details including how they presented themselves on the bandstand.  Their programme was quite varied and each number fitted into its place and told its own story.   There were piano-less trio numbers, quartet numbers and quintet numbers.   The tunes were all originals and they were well written.

I have to comment on the quintet arrangements which were simply sublime.  Some of the better arrangers like Marty Paich or Kenny Wheeler could arrange tunes in such a way that smaller ensembles sounded as if they were much bigger.   The advantage of this is that it leaves the listener with a feeling of airiness.  A sense of the space around each instrument. 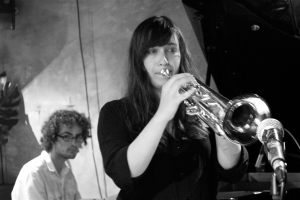 When I first heard the quintet I was surprised at how big the sound was.  There were only two horns, Cullam Passells (as) and Liz Stokes (t, fh).   This is the illusion created by good arranging.  Liz Stokes was especially fluent in the second set and a Wheeler-esk slur added colour to the performance.

I have seen Cameron play before and he really stepped up a notch with this gig.  I think that he enjoyed it and it was a challenging workout for bass.  The drummer Adam Tobeck was comfortable throughout and he pushed himself harder in the second half.   A blistering solo earned him his stripes with the CJC audience.

The band member I am most familiar with is Matt Steele.   I have liked his playing from the first time I heard it and he was even better at this gig.   He has a mature style but it is different to many of the pianists I hear as his touch is often light and crisp.   His comping is breathtaking as he urges the soloists to greater heights.  While you are always aware of his right hand soaring in chromatic invention during his solos, his left hand weaves its own chordal magic.  If I needed a single word to describe his playing it would have to be melodic. 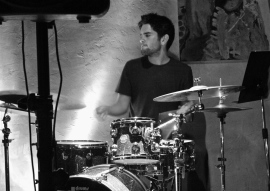 The set list was a work of art in itself.  On the page it read like an Imagist poem by Langston Hughes or William Carlos Williams.

Race-car Red Red Race-car, Molasses, What the Fuck is a Persimmon, Money Grubber, I’ve, So This is What it’s Like,  Magnetic North, Wrack, Candied Carrots, Elysium, Greens Waltz, Up Up Down Down Left Left Right Right AB

Callum presided over the night with that easy confidence of a born leader. He told very funny stories (especially the WTF is a Persimmon story) and he encouraged his band in a way that ensured they gave their best.   If that is the calibre of students emerging from the city’s Jazz schools then we are in for an exciting future.   Big ups to the band and especially to Callum.