As a group of the worlds leading astrophysicists excitedly ran one last check. At the precise moment that the astonishing mathematical proofs confirmed Einstein’s theory of ‘gravitational waves’, the Circling Sun hit the CJC. This rare cosmic event released fresh gravitational waves which pulsed throughout central Auckland; altering the molecular structure of any ear within radius. It was an appropriate evening for the Sun to manifest this ‘climatic singularity’, preceded as it was by a dog-day as hot as any on record.

There are five musicians in the Sun – four human and one android. On tenor saxophone, doogan & keyboards was Cameron Allen, on drums & electronics was Julien Dyne, on pedal steel guitar & electric guitar was Neil Watson and on electric & acoustic bass was Rui Inaba. When fine musicians like this play out-crazy music, influenced by sources as diverse as Yusef Lateef, Alice Coltrane, Mulato Astatke and Tom Waits, you know you are in for a wild and danceable ride. The doogan is a cunningly contrived android, assembled from antique parts and loosely controlled by Allen. It is an independent minded machine often exceeding the prime directive; a mechanical and musical ‘singularity’.

The Circling Sun is more a phenomena than a group. They defy musical form and yet exist convincingly in their own orbit; circling an altered reality. As with all wonders there is much to appreciate. The intricacy of their many machines, the indelible sonic footprint and the sheer joy they bring. I took some guests down to the club that night. Flamenco artists Isabel Cuenca and Ian Sinclair (and Ian’s wife Zarina). I wondered how they would react to this wild unconstrained mix of free improvisation and world beat psychedelic Jazz. Isabel the Flamenco dancer was quick to respond. ‘This is amazing, it has deep passion’. Passion is the heart of many musics and like authenticity it is a vital component. Long live the avant-garde – long live passionate music – whatever the genre.

In his seminal work “This is Your Brain on Music’ neuroscientist Daniel Levitin reveals the following. ‘A liking for dissonance is a development arising from deeper listening and on attaining musical maturity. A very young child prefers consonance over dissonance, the mature listener increasingly values contrast and enjoys having expectations confounded. After spending time listening to deeper or more complex music, lightweight consonant passionless music becomes boring. There is a neural basis for this’.

Instinctively, the Circling Sun understands this and they feed audiences a healthy diet of dissonance. At one point Watson called down thundering chordal dissonance (as the drum beats rained like Thor’s hammer and the keyboards created strangely intricate figures while the bass overlaid danceable grooves) . As Watson repeated the two chords over and over he varied them ever so slightly. It was recidivist mayhem, but there was a logic, a cosmic logic and a deep raw beauty in the onslaught. I loved every moment of it as I reeled from the sonic blows. Adding to the excitement was a strong kinetic effect, Watson dropping lower each time he struck the strings. Dyne dancing all over the kit. This was Ceramic Dog territory and done to great effect. Levitin talks of this also. ‘Experienced listeners often get more out of live music than recorded, because they read the musicians body language in micro detail. The body language of the musicians sharpens the listeners expectations’.

The Montreal born Dyne was just the drummer for a band like this. His musical credentials are impeccable. His expertise extends well beyond the kit to that of producer and forward-looking experimentalist; electronic future beats, hip hop, house, afro beats, boogie funk and instrumental jazz. His work with Ladi6 has brought him to wider attention, but his own Lord Julien recordings and his deeply funky ‘Down in the Basement’ (Vol 2) cuts are well worth checking out. This band has few constraints and it gives him ample room to stretch.

Allen plays saxophone and a variety of other instruments. He has long been known for his hybrid mechanical/electronic creations. His tenor is a Buescher (a brassy beast of ancient lineage) and its earthy tone is always pleasing in Allen’s hands. In recent years he has given equal time to his android doogan and an assortment of strange keyboards. He flies in the face of the prevailing fad for tracking down quality analogue instruments. Instead he plunders the throw away machines from the early digital age. This is an interesting development, as the reason these instruments were often abandoned, was because they didn’t sound like the acoustic instruments they sought to emulate. They sounded like new instruments and fed through a variety of pedals they are reborn. This is a recurring theme of the new millennium, reoccupying old spaces in new ways. Recycling, conservation and ultra modernism in one package. 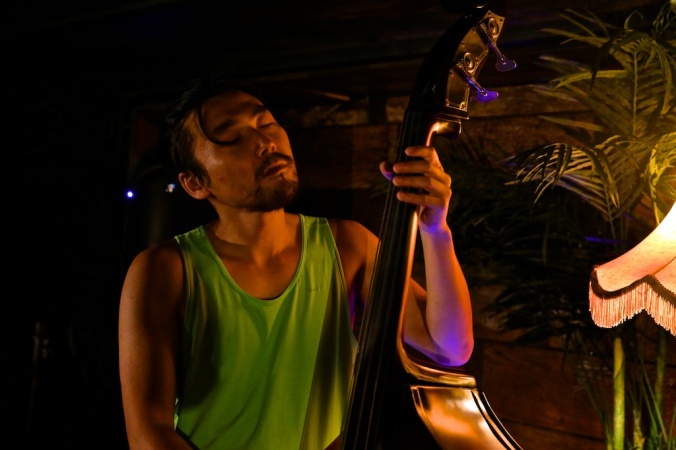 I have long been a Watson fan. The man is fearless and his musical ideas cross territory few others dare to traverse. His increasing mastery of the pedal steel already sets him apart, but his ventures into the experimental avant-garde with the instrument are unique in the New Zealand context. While an accomplished studio musician his preferred gigs are those without boundaries. With Watson you get Americana, blues, Jazz psychedelia or wild forays referencing Marc Ribot & Sonny Sharrock. The Sun suits his wild eclecticism. 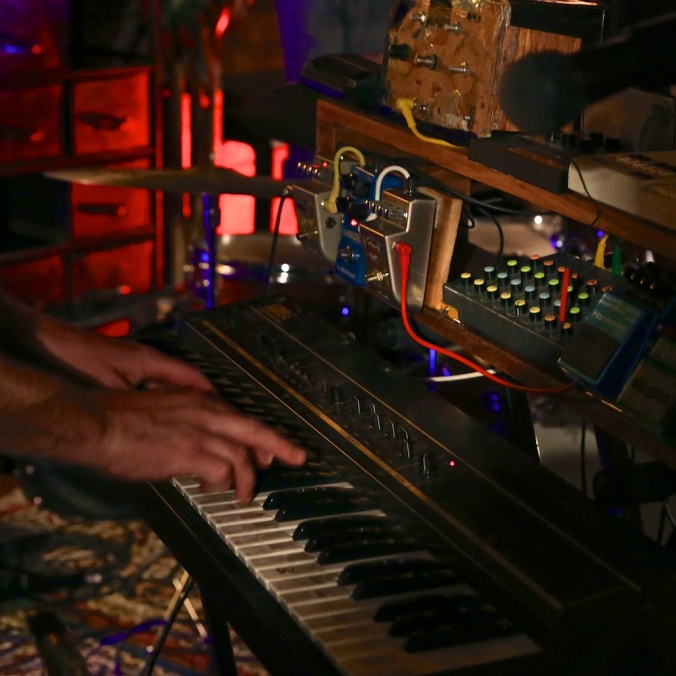 The remaining band member is Rui Inaba on bass. I have seen him play a number of times and most often with Watson. This is the first time I have seen him on electric bass and the instrument counterbalanced the free ranging explorations of the other three nicely. There was also a guest artist performing on Wednesday – the ever popular J Y Lee on Baritone saxophone. During one number Lee, Watson, Inaba, Dyne and Allen took the tune ‘outside’. It was mayhem and madness of the best kind. This is a very loud band and the enjoyment rang in my ears like summer locusts for days after the event.

Footnote: The doogan improves with age, but its strangest feature is an ability to time travel. As each improvement appears a proportionate regression in time occurs. When it first appeared it had wheels, an alarm clock and many more modern parts. The recent assemblage is altogether older – a regression to the beginning of the digital era. A small yellowed-plastic Cassio keyboard routed through various pedals and midi boxes, sitting opposite a mysterious plywood box. The box bristling with nobs, toggles and sporting an impressive amount of gaffer tape. Beside the pedals a Moog like instrument with an early AM transistor radio plugged into it. Below that an ancient weather-beaten Korg. The small wooden box is most intriguing and although it resembles the two-valve home made radios of my youth, I suspect that it is something like Orac (Google ‘Blake’s Seven’ for more information on Orac). 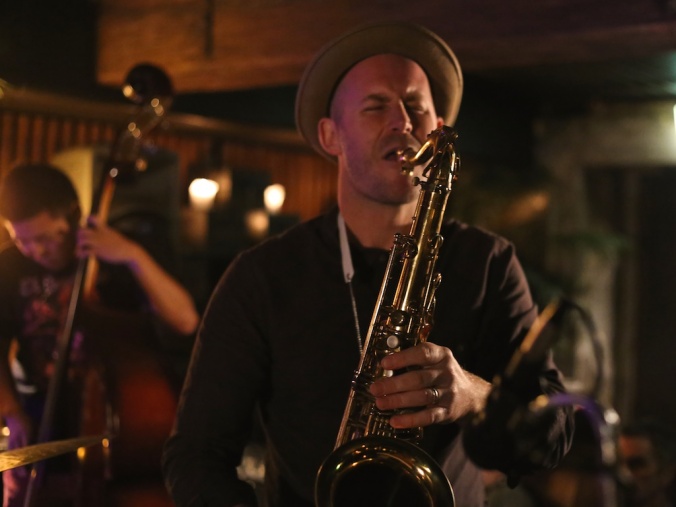 Any astronomer worth their salt will tell you that it is paradoxical for a sun to embark on a circular orbit. The last time this happened was during the Spanish Inquisition. On Wednesday the paradox increased when the Circling Sun departed their orbit to play at the CJC (Creative Jazz Club). This gig had been a long time coming and we welcomed it. Hearing them away from the babble of the hard-drinking Ponsonby Road crowd was a treat for us. The Circling Sun always give of their best, but this time we could hear the quirks and subtleties unfiltered. This is a band with a vast soundscape and the Jazz club echoed to the sounds of doogan, Tuba, analogue keyboards, digital keyboards, piano, trumpet, flugel horn, flute, tenor 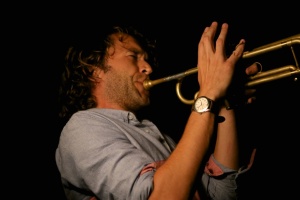 saxophone, upright bass, drums and electronics. This is the type of music that sits well with me.

In spite of the name, the Circling Sun is not solipsistic. Not locked into an inwards gazing spiral. A dictionary definition tells us that Solipsism is a spiralling madness that no-one else can enter. Theirs is an inclusive madness of serendipitous happenstance. A band where personnel changes are as seamless as flowing water and where the only truly unchanging thing is the name. A band that can appropriate sounds and recreate them into new musical forms and all achieved without fear or favour. Another-world to experience.

The group cited influences as far-flung as Alice Coltrane, Yusef Lateef, Randy Western and Tom Waits. Although the link is possibly fanciful on my part, perhaps the influence Cosmic Jazz/Funk is present, an obscure genre close to my heart. They are chaotic, loose and free at

Cameron Allen should be heard more often in settings like this. He is a gifted saxophonist and winds player with great musical ideas, often imparting a raw energy. He is also drawn to home-assembled electronic wizardry as many in this band are.  Finn Scholes on horns is another who doubles atypically (including tuba, keys and piano). He has recently been overseas and since returning I have seen him perform on a number of occasions.  His articulation is always interesting and he has a rich sound. Tinged with the vibrato of the mariachi trumpet. A sound which he owns and one that fits the bands vibe perfectly.

Neil Watson like Cameron Allen is a mainstay of this band. His classic fender, augmented lately by pedal steel guitar. The latter adding colour and texture and above all adding that warm embracing feel of country. Anyone who has followed Frisell’s journeys, fusing Jazz with country americana will get this. Rui Inaba on bass is often encountered with Watson and frequently in this lineup. Here he sits solidly at the heart of the storm, maintaining the rhythmic groove unfazed.

The most powerful presence is drummer Julien Dyne. A versatile gifted artist who has travelled and recorded widely. His beats while often referencing his multi genre background, urge the band to greater heights. It is a privilege to see drummers of this calibre and I hope that he continues with open-ended Jazz projects like this. I have heard him on numerous occasions and I like what I hear.  As a unit, this combination takes no prisoners and the audience were glad of it. The first guest to join them was J Y Lee who quickly settled in on baritone saxophone. He often plays with the Circling Sun and is a popular addition.

During the second set a great gig got even better. Jonathan Crayford arrived and without too much persuading, sat in on piano. This was met with obvious delight by the audience, as Crayford is extremely popular. He knew none of the tunes as they were mostly originals and there was virtually no sheet music to guide him. It didn’t matter. Someone would announce the key and then a few chords in he would locate the heart of the tune. A musician of his experience and gifts is no stranger to situations like this. The audience, clearly wild about the gig, were by now whooping with enthusiasm between numbers. When Crayford sat in they felt like they’d won the lottery. He doesn’t get home often, but improvised music fans are eager to soak up what ever they can get of him.