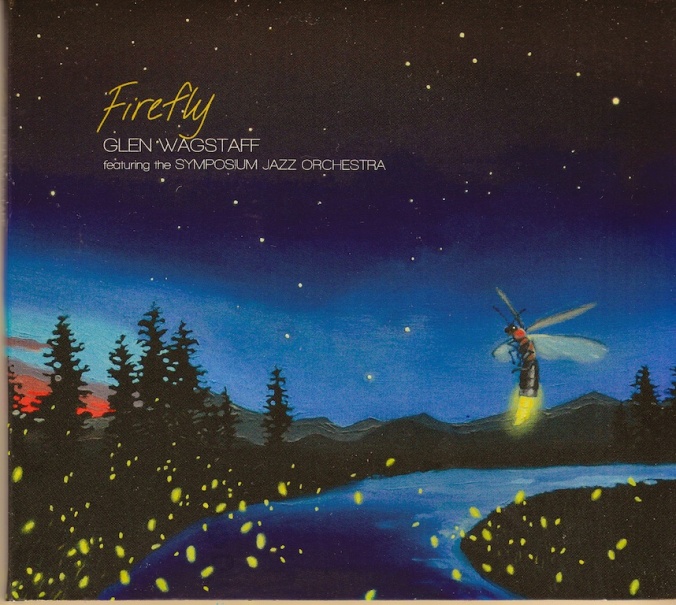 The postie brings more music to our house than he does bills and so I always welcome the sound of the small motorbike pausing outside. This time she delivered a wafer thin parcel with the sender identified as Glen Wagstaff; Firefly had arrived. Looking back over my blog posts revealed that I first encountered the Glen Wagstaff Project in October 2013. At that time we heard several compositions now on the album and in particular to the title track ‘Firefly’. The first Auckland lineup was an eight piece ensemble, all Christchurch musicians. I was only familiar with two of them, Tamara Smith and Andy Keegan. The ensemble impressed and especially notable were the compositions; well constructed charts which magically exceeded the limits of eight piece instrumentation.

The other memory of that visit was the evocation of Kenny Wheeler. Few other New Zealand ensembles worked in that space. A year later in November 2014 Wagstaff appeared again. This time engaging the seventeen piece Auckland Jazz Orchestra. Bigger charts, more complexity and additional compositions, this was a precursor to the album. ‘Firefly’ was a Kickstarter project and many of us around the country were keen to pitch in. When a project has strong enough bones Kickstarter is a reasonable way to proceed. Wagstaff had sewn the seeds well The ease in which he reached his target was ample proof that he had found a solid support base. As we reach for new workable distribution models, this tool is worth considering; if like Wagstaff you can deliver the goods. Road testing and winning over a solid core of contributors is essential.

The tracks have a number of moods but the album flows beautifully. The cohesion comes from the writing and the sense of vision imparted. As good as the various artists are, it is the writing that grabs you. The rich orchestral voicings in ‘Maylie’ reach deep and send shivers down the spine. There is a sense of nostalgia evoked, a longing for what is just of out of reach; even of pleasurable melancholia (The melancholic voice is often invoked by poets and it is nice to see it explored in this context. In earlier centuries this mood included pleasurable feelings ‘Pleasing myself with phantasms sweet, methinks that time runs very fleet, all my joys to this are folly, naught so sweet as melancholy’). In the title track ‘Firefly’ the mood is light and airy. Once again Wagstaff has found the right voice; a dusky sense of joy prevails. The tune Sakura based on a traditional Japanese melody follows a well trodden path among improvising musicians; again well done and showcasing Wagstaff on guitar. He is soft toned and his sound lovely. In this piece subdued orchestration allows the melodic aspects of the piece to unfold without clutter.

The Symposium Orchestra is a nineteen piece Jazz orchestra and with guest artists and doubling it swells to twenty-three instruments. Wagstaff utilises this rich palette well; avoiding the pitfall of over-orchestration. No mean feat with that firepower behind you. Roger Manins guested on tenor saxophone and Elen Barry added wordless vocal lines.

Writing orchestral charts is a monumental task and when you consider that this is a young musician’s first album, the respect for what he achieved deepens. In the USA there is much angst over the dearth of support for Jazz. In New Zealand we have never had that support and so artists create for the joy of it. When albums like this emerge, the New Zealand Jazz scene grows in stature. Wagstaff has put an important  marker in the ground, his future now assured.

Buy the album from www.glenwagstaff.com