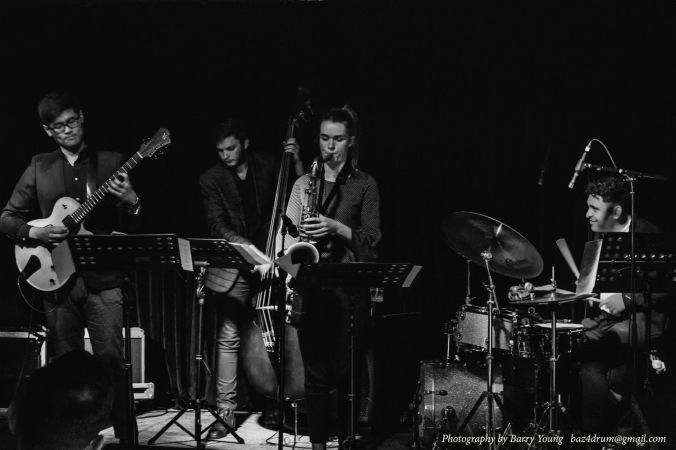 Brad Kang has previously appeared at the CJC, but this time he was here with his own quintet. It is not too much of a stretch to say that most emerging Jazz guitarists during the last decade have demonstrated a liberal dose of Kurt Rosenwinkel in their playing. It is in their sound and their approach to melody and it was unmistakable with Kang. That clean bright tone and the fluent unison lines as he and saxophonist Louisa Williamson ran through the head arrangements.

His compositions were vehicles for showcasing a formidable technique and the tunes were internalised, allowing him to play the sets with barely a glance at his charts. It is common for older and more experienced musicians to internalise the music, but less common for younger musicians who like to keep the charts close at hand.  Kang’s confident familiarity with the music paid dividends for him.

Kang and Williamson are a natural fit; not only when they run those tight unison head lines, but also during solos. Williamson adding a necessary weight to counter-balance Kang’s guitar, which mostly traverses the higher register. On stage, Williamson tends to hide behind the horn, giving little of her self away. That is, until she solos. Then, she’s suddenly authoritative and an expansive storyteller. Her tone rich and her fluency beyond question.

Unlike Williamson and Kaa, the pianist George Maclaurin was new to the audience as were bass player Hamish Smith and drummer Hikurangi Schaverien Kaa. They hail from either Wellington or Christchurch; part of a nationwide and pleasing renaissance invigorating the New Zealand Jazz scene.

Since his return from North Texas where he studied previously, Kang has become a fixture on the Wellington and Christchurch Jazz scenes. This New Zealand tour will be his last for a while as he is moving to New York shortly to study at the Manhattan School of Music.  When he returns, his musical journey can be updated and he will no doubt share that with New Zealand audiences.