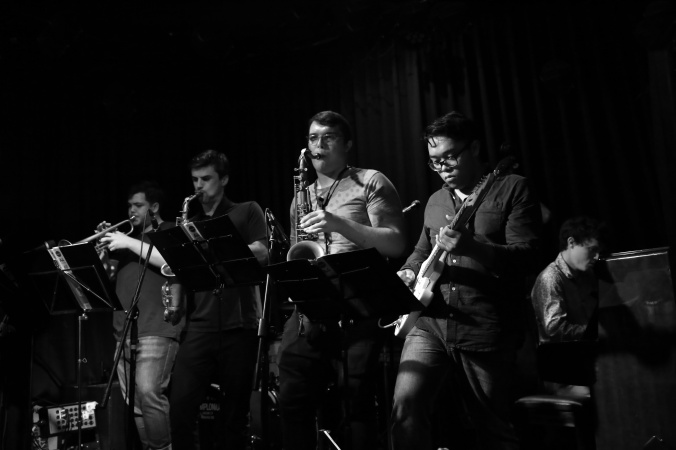 In keeping with the longstanding CJC tradition of keeping twice yearly slots open for emerging artists, late March featured two such sets.  First up was a group led by bassist Denholm Orr.  Orr has appeared in lineups a number of times, but this was his first appearance playing his own material and as a leader. His recent compositional work has placed increasing focus on arco-bass and consequently, the charts reached into that territory. Arco is not the default style for Jazz bassists but I am seeing a lot more of it lately and I welcome that.

Orr opened with a piano trio and as the set proceeded more players were added.  The larger formations tackled ambitious arrangements and this is a hopeful sign of things to come. Emerging artists should reach beyond their comfort zone – being challenged is where growth happens. On piano was the ever-reliable Nick Dow and on guitar Michael Gianan (who wowed us all with his first CJC gig a few months ago). Misha Kourkov was on tenor and new to me was Charlie Isdale on alto and Jack Thirtle was on trumpet. Daniel Waterson was on drums. Kourkov is shaping up to be a presence on the scene and Fritsch is grabbing attention with each fresh appearance. As most are still studying and given their ages and experience, it was a good start.

Lukas Fritsch headed the second set and again this featured ambitious material. Fritsch’s set had a tighter focus and perhaps because he had a few seasoned musicians in the ensemble ranks, the set sang joyously from start to finish. When Fritsch completed his finals, a buzz quickly circulated; that the recital performances had been something special.  I had not attended, but my attention was certainly piqued. The arrangements were superb and the musicians well focused, but the inclusion of Chelsea Prastiti and Crystal Choi gave the set that special something that lifted it beyond the ordinary.

Choi is fascinating to behold as her trajectory is pointed ever upwards – a pianist who understands how to get inside the music and make it part of her story.  Prastiti likewise is an innovative trailblazer, who takes the path less ordinary.  The front line was Fritsch on Alto, Asher Truppman-Lattie on tenor and Kathleen Tomacruz on guitar.  On bass was Wil Goodinson and on drums Tom Leggett. Fritsch writes interestingly and his performances are well thought through and engaging.

The gig was the last at the Thirsty Dog for the CJC (Creative Jazz Club, It took place on March 21, 2018.