Wellington has long possessed a gypsy soul and Jazz Manouche thrives there. In Auckland there are fewer such groups and the common form here is hybridised Gypsy. I am more familiar with these hybrid forms, but as a devotee of improvised music I possess many Django Reinhardt and Bireli Legrene recordings. The Black Spider Stomp are a traditional Gypsy Jazz group and everything about them shouts ‘du Quintet de Hot Club of France’. For a start they look the part in their slick black outfits and they mirror the traditional ensembles – three Manouche guitars, upright bass and clarinet (the clarinet player doubling on soprano and trumpet).

The hallmark of gypsy authenticity is the ability to swing in a particular way, and Black Spider Stomp achieves this. In western European gypsy the absence of a percussion instrument places heavier emphasis on guitar led rhythm. The rhythm guitars are essential to the momentum with their striking ‘la pompe’ strum. This hard swinging pumping style is very distinctive, with its dark chromaticism, bent notes, adherence to certain voicings, rapid arpeggios, powerful rhythms and regular use of vibrato. The tunes are mostly in 4/4 with a heavy accent on two and four (although waltzes are also in the repertoire). 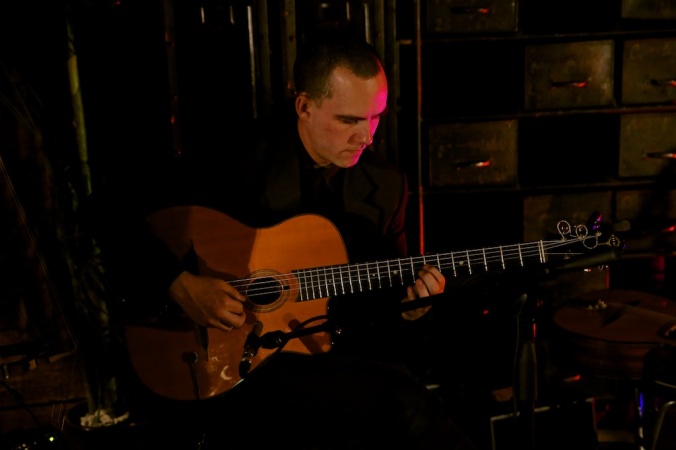 The style is so distinctive that it owns the tunes whatever their origin. Once while traveling in the Carmargue I stopped at a typical Provencal village. As dusk fell a group of Gitano guitarists started playing in the square. The tune was maddeningly familiar and I wrongly thought – this is a Reinhardt composition. It stuck in my head for days and then the penny dropped. It was ‘My Way’ – the tune popularised by Paul Anka and Frank Sinatra. Recently I learned that it is actually a French pop tune. Talk about music travelling where it will. Another perennial favourite in Jazz Manouche is Stevie Wonder’s ‘Isn’t she lovely’. Manouche Jazz itself is a hybrid of American Jazz and Gypsy – and each of those musical influences are sources as vast as an ocean.

Music has origins …. but no fixed abode.

The groups use of soprano saxophone (but in this case the straight-horn variant) is also authentic. While violinists like Stephane Grapelli regularly led Manouche ensembles (pre war), the arrival in Paris of horn playing musicians like Sydney Bechet influenced the post war style. Jazz Manouche reached maturity in Paris around the time of WW2 and it was so loved there, that a handful of Jazz loving occupying Nazi’s covertly protected it.  The use of a trumpet intrigued me for two reasons. For a reeds musician to double on trumpet is rare – the embouchure is so different. Post millennium we seldom hear such a distinct nod to Louis Armstrong – or to the early swing trumpeters. Perhaps with Armstrong or Bubber Miley in mind, reeds and brass man Baron Oscar Laven treated us to the occasional muted growl and smear. His cheerful enthusiasm for all of his horns was obvious.

Guitars always fascinate me. These were obviously based on the famous Selmer ‘Maccaferri’ guitars favoured by Django. There are two main styles of Jazz Manouche guitar – the ‘D’ hole ‘large mouth’ with its broader rich tone and woody resonance (most often the lead guitar) and the ‘O’ hole ‘small mouth’, which is brighter in sound and has serious cut through. Solos from both were heard. These guitars are things of real beauty, earthy multi-hued wood-grained and framed in a blur of hands appearing from the darkness.

Nothing says acoustic quite like an array of wooden instruments carrying a gypsy tune.