The eponymously titled album ‘Lucian Johnson+5’ was first released in 2016 and has recently been re-released in Japan on vinal. I have only encountered Johnson performing once or twice as he has spent a lot of time outside of New Zealand. He was born in Wellington, but led an interesting life elsewhere, travelling the world with various innovative bands and living for long periods in Paris. I first encountered him when he toured with ‘The Troubles; a delightfully anarchic folksy ensemble he co-founded along with Scottish Jazz drummer John Rae. After hearing Lucien Johnson+5, I will be paying close attention to his futures offerings.

I became aware of the album’s existence soon after its release, but carelessly lost the Bandcamp access code when I changed computers. I finally regained access, listened and was immediately impressed. This is a mature piece of work with real depth. Given the diversity of experience, the musicians bring to the project that is hardly surprising.  Johnson’s musicianship and compositional abilities are well known – pare him with these five musicians and you get something special. Any project involving Crayford, French, O’Connor, Van Dijk and Callwood is going to grab the attention.

There is a certain mood emanating from this album, a palpable sense of the Iberian Peninsula. It is more than just the track names – it cuts far deeper than that. You will not hear overt Jazz Flamenco or Moorish tunes. You will hear reflective ballads, Latin, hard swing and all with fine arrangements (arrangements which evoke the hay-day of the classic Jazz ensemble). The album warmly invites us to engage, and the deeper we engage the greater the reward. The musicians were clearly onboard with the project and each of them gets a chance to shine. There are many wonderful solos, none that are too long and each solo harnessing to the spirit of the collective. Brilliant musicians all, but with no egos on display.

‘Light Shaft’ has a dancy Latin feel with French and Johnson reacting to Crayford’s rhythmic accenting; Crayford later tying it all together with a masterful solo. ‘El Cid’ is another great tune, again with a Latin American flavour, this time Afro Cuban. The clave aside, it evokes the Reconquista hero perfectly. El Cid’s is a tale well worth the re-telling; especially since modern scholars discovered that his antecedents were actually Moors, the very people he fought with such evangelistic fervour – a modern parable. ‘Zapata’ is another delightful tune and with plenty of meat on the bone.  It opens with O’Connor beating out a Krupa like rhythm on the toms, the ensemble comes in next, navigating a skillfully arranged head with nimble ease. Van Dijk and Crawford follow with stunning solos, but everyone is superb. This is a great piece of ensemble playing and above all it is fun. Here is Zapata:

My favourite from the album is ‘Asturias’. This track has a thoughtful quality and as many layers as a ripe onion. In spite of being a sextet, the ensemble sounds like a nonet at times – capturing the vibe of 50’s Gil Evans. This lies mainly in the skillful writing, as space and texture are maximised. The rich voicings of the horn line are also of importance, as they somehow manage to convey substance and airiness at the same time. Nick Van Dijk in particular, utilising the opportunity to shine through. Crayford and Callwood also have essential roles – Crayford creating a strumming effect, as Callwood did in the opening bars. Asturias is a region of northwestern Spain and also a Flamenco guitar style (a style often adapted to other instruments). Albeniz wrote in this style in the 19th century,  The melody over a strummed pedal chord (the thumb playing the melody line).

When we listen to evocative music, we bring our imagination to the experience. Whether intended by Johnson or not, this album took me back to Spain. I have travelled extensively in Andalucia and rekindling those memories through this music was a pleasure. The artwork is also superb and that is credited to George Johnson. The best place to source this album is on Bandcamp or via the Lucien Johnson website. lucienjohnson5.bandcamp.com

It has always been said that troubles arrive in pairs.   In this case the old adage was woefully awry as ‘The Troubles’ arrived in nonet form.  Their arrival may have ‘Rattled’ us somewhat, but we are built of stern stuff in Auckland.   We fortified our ourselves with strong liquor and pep talks, adjusted our parental lockout settings to allow for some serious swearing and settled in for the realpolitik of John Rae’s and Lucien Johnson’s crazy-happy Jazz.     ‘Oh Yeah’, we told ourselves, ‘We are ready to handle anything a Wellington band can throw our way’. 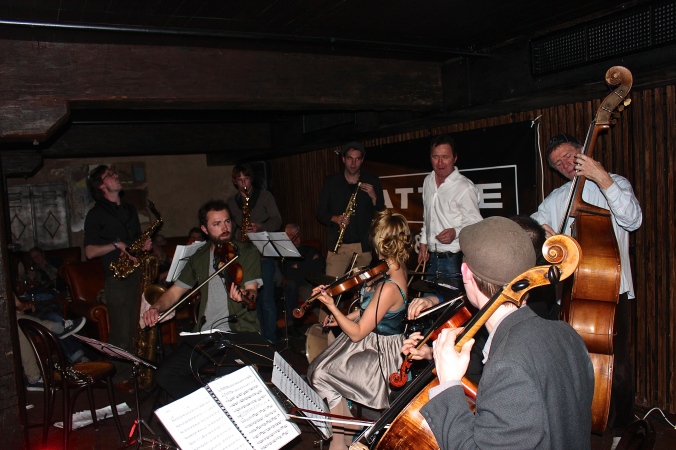 There are bands that I like, bands that I respect and bands which drive me wild with pleasure.   ‘The Troubles’ are of the latter kind.   I’m besotted with this band and their deliberately ragged, madly political, quasi-serious satire.    This band digs deep into the well-springs of life and what bubbles up is a joyous lake of barely controlled madness.   The anarchic overtones are deliberate, but there is a scream-in-your-face humour that overshadows all else.   This is about chiaroscuro; a bunch of opposites vying with each other for attention.

This band is about plunging us without warning into the troubled spots of the world and then showing us humour where we thought none existed.  The overt political messages were a joy to me as I have never quite understood why this space is not filled more often.   The history of Jazz is intensely political and to describe ‘The Troubles’ music as a continuation of the work done by Carla Bley, Charlie Haden and especially Charles Mingus (even Benny Goodman) is not too far-fetched.    This band is a talented group of clowns shaking us by the scruff and saying; laugh or cry but for god’s sake look at the world about you.   There is no solace for Lehman Bros, Merrill Lynch, Barclay’s or John Key here.  For Jazz lovers with big ears there is joy aplenty.

This band is about call & response; not just between instrumentalists, but by the band vocally responding to John Rae’s trade mark exhortations.  Although he leads from the drum kit, that doesn’t prevent him standing up and shouting at the band (or the audience) to elicit stronger reactions.  During one of the middle Eastern sounding numbers (which appeared to lay the Wests hypocrisy bare), he shouted in what I can only assume was faux Arabic.  A flow of equally Arabic sounding responses flowed back .   It was the string section verbally responding as they wove their melodies around the theme.

On another occasion John Rae announced that we would be celebrating an often ignored trouble spot.   “I will now express solidarity with the North Americans”, he announced.  “The Sioux, Cherokee, Iroquois, Apache, Mohave etc”.   He began with a corny war dance drum beat which quickly morphed into a tune from ‘Annie Get Your Gun’.   As the melodic structure unwound into free-Jazz chaos we all understood the history lesson and laughed at the outrageousness of the portrayal.

Another Tango melody written by Lucien gradually reached a joyous fever pitch.  During the out-chorus the instruments dropped out one by one and as each instrument stopped playing the musicians raised a closed fist in a revolutionary salute.   Although it was quite dark in the club we had all picked up the cues.  This was a musical night beyond glib definition.

Like life, the music gave us lighter and then more thoughtful moments.  Musically it was amazing fun and after a difficult week I was suddenly glad I was alive.

Mission accomplished I think John and Lucien – keep shaking us up please.