I am a Marc Ribot enthusiast so when local musician Neil Watson sent me a message to say that Ribot was coming to New Zealand I whooped for joy. My first thought was, wow, this will be the good shit. My next thought was, oh yeah I want to interview that cat about his musical and social activism. Watson was to open for him which pleased me. Watson was a good fit for this gig. An iconoclast multi genre improviser himself.

I put out a few feelers to people connected to the tour, letting them know that a local Jazz Journalist was keen to interview Ribot. I heard nothing back and assumed that the tour would be whistle-stop; this is often the case when a single New Zealand concert follows an Australian tour. I let it drop with some regret.

Because I keep an eye on the wider improvising scene, I was aware that Ribot toured Ceramic Dog the previous month. I love that band. Ribot with band mates Shahzad Ismaily and drummer Ches Smith are a force ten hurricane. Wild and free-ranging but subtle at the eye of the storm; Jazz infused while taking few prisoners from the past. They are the music of everyman and all time. I learned at the venue that this was not a Ceramic Dog concert but Marc Ribot on solo acoustic guitar. He is known for the diversity of his projects and I would turn up to a Ribot gig if he was just whistling.

My partner and I arrived early as we wanted good seats. Amazingly we found seating in the front row and this proved a blessing and a problem. A blessing because we could see and hear Ribot with crystal clearly. A problem because of what happened next. A rotund bearded man clumsily took the seat next to us. As he seated himself heavily I could smell the booze on his breath. Fucking drunks. This guy had been pre-loading for at least a decade. He struggled to focus and said, ‘I can’t believe that Marc Robot is here; this guy plays with Zorn’. He was right to disbelieve because his drunken buffoonery denied him the entire experience.

My first act on arriving at the venue was to approach the Tuning Fork floor manager and ask about photographs. He told me of a request from Ribot for absolute quiet. It was solo acoustic guitar, not Ceramic Dog and at Ribot’s request the venue turned off the air-conditioning and fridges. Camera clicks were obviously out of the question unless between numbers. I respected that and took photographs unobtrusively during moments of applause. This was a special gig that required a womb of engaged silence. Audience and musician locked into an embrace of sound.

Because of the above, what happened next was all the more appalling. The drunk, who was so excited about hearing Ribot fell into a deep stupor at the first note. It was a stupor with sound effects and alarming floor-wards lurches. At first his awful wheezes were low volume, but as the concert progressed they became multi-phonic.

After carefully arranging himself, foot on his guitar case, hunched over his ancient acoustic guitar, Ribot dropped into the performance zone. Balanced gently on his knee was an incredible 1937 Gibson L-00; a simply wonderful instrument. When he plays solo he prepares by withdrawing from outside influences. Before a concert he examines a plethora of possible tunes, weighing up musical ideas and searching for new and often oblique ways to tell stories. He seldom has a set list in mind and lets the music and the moment take him where it may. This is a frightening high wire act and only a master improviser would attempt it. Putting yourself in such danger is fraught with risk and an unexpected audience distraction could be fatal. Ribot is more than up to such a challenge. He is one of the worlds greatest improvisers and an acknowledged master of his instrument.

The guitarist was deeply absorbed throughout his astonishing performance. creating an orchestral sound and telling stories free from ego and constraints. In Zen like fashion he examined the various tunes, turning them upside down or examining them from an oblique angle. Although lightly miked, the sound was fatter than an 18 piece orchestra. The subtleties all astonishing micro journeys, complete in themselves. Naked improvising at its best. The journey took us into the classical Spanish or Cuban guitar world, it traversed standards, Delta blues, Coltrane; I could even detect the all but forgotten vibe of Eddie Lang and Carl Kress. At times avant-garde and at other times pastoral. This was a night that I will never forget. Everyone there was spellbound…….except for one fool.

I will now relate my communication moment with the great man. I value it even though I wish it had been other than it was. There were two moments when Marc Ribot looked up and engaged directly with me. I know that I didn’t imagine it. My partner Darien had left her seat long before to sit elsewhere. The fumes and lurching were doing her head in. (Reprise) Fucking drunks. During one particularly drunken wheeze Ribot looked directly at me. Although only a few feet away, I tried to make myself invisible. My superpowers deserted me. Shit, shit, shit I thought, he must think it’s me. I quickly inclined my head sideways towards the drunk, hoping that he could see my gesture in the gloom. Then I lunged out and jabbed the man hard in the ribs.

Ribot caught the gesture and gave me the hint of a smile and a brief nod. That last gesture confirming that my desperate telepathic signal was received; an acknowledgment that it was the fool disturbing the force and not me. This was better than an interview; my superpowers were back and we were communicating by telepathy. Emboldened I reached across again and again to jab the fools ribs. I am not an aggressive man, but the great Marc Ribot had given me permission.

And all the while the music flowed unabated, wonderful music. The art music of everyman.

Footnote: Neil Watson acquitted himself well and added to the enjoyment of the evening. He played three types of electric guitar plus his pedal steel guitar; his set list ranging freely across genres. A Nirvana tune, a Hendrix referencing ‘Hear my train a comin’, a nice tune composed by his partner and the Kiwiana classic Blue Smoke as high points from his set.

This band shakes all conceptions in the known musical universe and they do it by pillaging pieces of reality and cunningly re-assembling them into new and abstract forms. They are as brilliant as they are disarming. Getting under your skin with outrageous banter and constantly evolving story lines. Perhaps this is the future, laughing back at us, as we live in our bubbles of musical complacency?

It’s a little hard to define ‘The Grid’ by using existing musical terminology, so I will do so by drawing upon disparate references. If you were to add a pinch of Marc Ribot, Dvorak, R2D2, Kraftwork, Radiohead, Andre 3000, Willie Nelson and John Zorn into a crucible, you might create something approximating this band. In spite of the bands modernity, they have embarked upon a musical odyssey of classical proportions. Like Odysseus they’re building strange narratives as they navigate Siren’s and Cyclopes. Ever drifting into uncharted waters.

The first number up was ‘Commodore 64’ from their first album. Since its inception this story has evolved into a saga (see video clip). The setting is somewhere in the future at a time when humans are replaced by robotic machines. The cyber children of these evolving machines have become bored with life and in order to alleviate that boredom they start copying human pop culture. A hipster culture develops and the young male machines start attending nightclubs in order to pick up cool hipster machine chicks. The goal is locating their ideal, a female robot dressed as a ‘Commodore 64’. I don’t think that Phillip K Dick could have bettered that storyline and the music is machine referencing, freaked out cyber nostalgia. 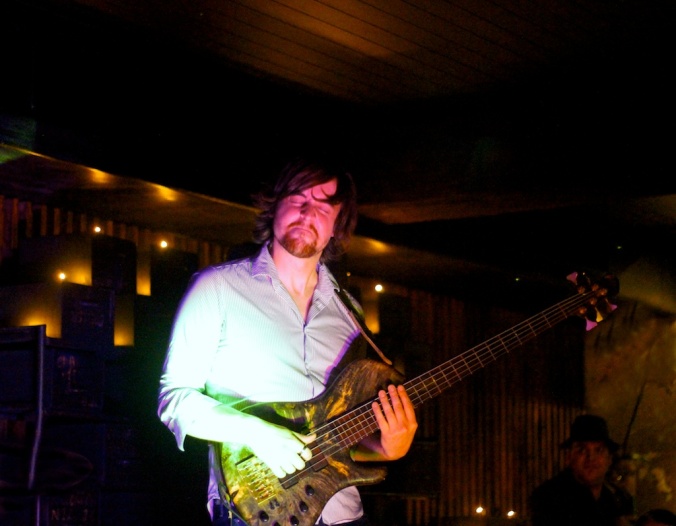 Some other outrageous story-lines were as follows: Ben Vanderwal; “Don’t you just hate it when people make pretentious statements like – If Bach were alive today he would be an improviser” or “If Charlie Parker were alive today he would be in a ‘metal’ band“. He proceeded to say how distasteful and silly this sort statement was and then with a straight face announced his next tune as Dvorak’s third Symphony, the scherzo movement. Pausing before launching into their digitally enhanced heavy-metal tinged phantasy he added, “Of course if Dvorak were alive today he would be playing in this band”. Another tune intro was; “I am proud to relate that UNESCO has just voted this the tune most likely to bring about world peace”. They also told us that they would be playing a number from Ellington’s occult period ‘Satan’s doll’. It took a minute to sink in but when we heard the opening chords of Satin Doll we fell about laughing. 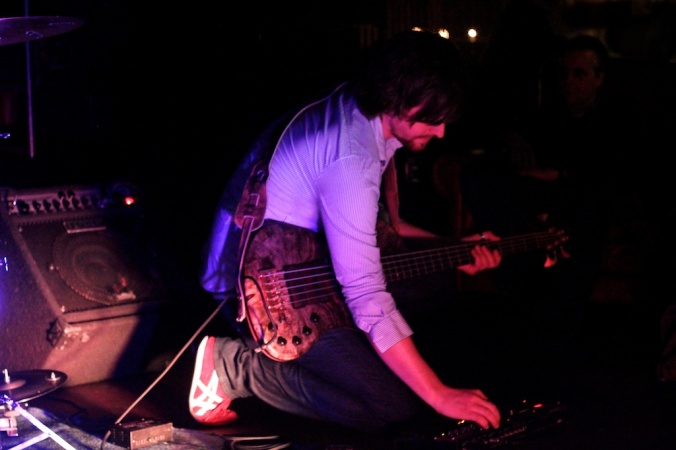 There is much more to this band than outrageous humour, there is also outrageous music. They can slip between Willie Nelson and thrash-punk hardcore in ways that defy logic and in spite of the yawning stylistic chasms it all makes perfect sense at the time. It is later when the enormity of what you have just witnessed sinks in and you find yourself sitting in a confused state on the edge of your bed that you mutter WTF.

There is electronic wizardry aplenty at their disposal but that is not what stays with you. It is their musicality, their ability to connect and their cleverness. This band really can play and they impart strangely apposite history lessons as they go. The music can also turn on a dime, moving from the outer reaches of sanity to a gentle jazz ballad played over clever loops. I am absolutely certain that this sub genre of guitar trio will soon become more mainstream. Marc Ribot (Ceramic Dog) and Australia’s Song FWAA tread similar paths.

This is intelligent music and it requires mastery of the instruments plus mastery of a bewildering array of pedals, rattly things and clips. Making drums imitate machines or making guitars imitate an angel or a banshee is not a job for amateurs. All three band members are highly regarded on the world scene where they have gathered a multitude of accolades, awards and scholarships. Individually they have accompanied the cream of American artists such as Terrance Blanchard, Chris Potter, Chic Corea, Victor Wooten, Joe Lovano and others.

The Grid is primarily known as a Perth Band, but the USA could also claim them. In reality the band members now live in three cities and two countries. Ben Vanderwal (drums) is originally from Perth and so is Dane Alderson (electric bass) but Tim Jago (guitar) is from the USA where he lives and works at present. He has recently been working on a doctorate and teaching in Miami. Ben Vanderwal (who told the stories at the CJC) regularly plays with top US musicians and our own Frank Gibson Jr is credited as being his original teacher. Dane Alderson is the son of a jazz drummer and the winner of various prestigious awards. He plays an Aryel 5 string bass and like Tim Jago conjures up a world of wonderful sounds. My final comment on The Grid is; I hope that they comeback….soon.

Both of these clips are from earlier gigs – the stories and the instruments have evolved since then. The music is great as always.