Jazz Flute is sometimes relegated to a place of lessor importance in the scheme of things and a few say that the instrument lacks the expression of the more ubiquitous reeds.   As with all things in Jazz it depends entirely on who is playing the instrument and how they apply themselves to the task.  If such naysayers had witnessed Trudy Lile on Wednesday the 10th of October 2012 at the CJC (Creative Jazz Club) they’d have swallowed their words.   This was expressive and extremely lively flute playing and no one with half a brain could doubt Lile’s supremacy on the instrument.  She is a master of extended flute technique but the effects are always applied tastefully.

As well as being a premier Jazz flutist, Trudy Lile is also a composer and vocalist .  These three skills were all evident at the CJC gig as she showcased many of her own compositions.   The numbers were engaging and tended toward the melodic (as you would expect of flute compositions).

I have selected one of these compositions as a typical example (see You Tube clip).   Her ‘Kingston 787’ has a well-arranged head, which as it develops, becomes the perfect springboard for extended improvisation. With the vague promise of summer in the offing I was in the mood for this type of number.  Swinging and soaring like a skylark – a tune that pleased the ear and invited you along for the journey without losing you before the end.

‘Kingston 787’ is a great composition, referring to the famous South Island steam engine of that name.  There is ample precedent in Jazz for writing charts about steam trains and two of the most notable examples are Gerry Mulligan’s ‘The Age of Steam’ (who could forget ‘K-9 Pacific) and Oscar Peterson’s memorable ‘Night Train’.   Trains and jazz have always been linked as musicians rushed between gigs; writing charts to the clickity-clack.

While there were a few numbers by other people there were seven Trudy Lile originals.   First up was a feisty tune named ‘Flute Salad’ (Lile), followed by ‘Winter Wind’ (Parlato), ‘Night Bird’ (Enrico Pieranunzi), ‘Emily’ (Lile), ‘If I Fell’ (Lennon/McCartney), ‘Kingston 787’ (Lile), ‘Hammond Sandwich’ (Lile), ‘The Laughing Song’ (Lile), ‘Smile Like That’ (E.Spaulding), ‘Frodo’s Mojo’ (Lile), ‘Gone By Lunchtime’ (Lile).  The choice of lessor known tunes by well-known musicians worked well as a contrast.  It offered comparisons and her own compositions stood up well against the likes of Pieranunzi.  For ‘If I Fell’ Trudy played piano and sang, accompanied only by a first year student Sam Swindells on guitar. 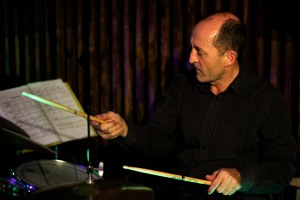 Her regular band is Mark Baynes (piano), Jo Shum (upright bass) and Jason Orme (drums).   This unit has been together for some time and it shows.   I have caught Jo and Jason many times at gigs but this was the first time that I had heard Mark.   It proved a good introduction to his playing and the musical rapport between he and Trudy worked well.  Mark’s touch and voicings are different from the pianists we see regularly at the club and it is encouraging to see such stylistic diversity in our city.   Mark is a keen student of Brad Mehldau and this focus has undoubtedly shaped his approach to the instrument.

Jo gets better and better every time I see her as she has the ability to provide a solid cushion beneath the piano and flute – freeing up both as she holds the centre.  By contrast her soloing was highly melodic and perhaps it is this which makes her so right for working with Trudy.  When her amp failed mid number her loss from the mix was noticeable although the rest of the band played on without faltering.

Jason Orme is the other regular and he and Trudy go back a long way.   Jason is a versatile drummer who knows exactly what his job is.   For this gig he shared the drum duties with first year student Michael Harray.  Michael played drums for one number and percussion for several more.   On ‘Kingston 787’ we heard both drums and percussion.   They worked extremely well together – I like gigs with a percussionist and a drummer and Michael was superb.

Another student Joel Griffin played alto on one number and a jazz choir joined Trudy on another.   None of these students let Trudy down.

There is a significant thing to appreciate about Trudy Lile and that is her role as an enabler.   She teaches Jazz studies at the NZSM Massey Campus and is on a perpetual quest to promote, challenge and push her students into playing in situations like this.  Sharing your prized gigs with beginning students has its risks but the rewards are far greater.   It is only through being tested against more experienced players that they learn.

Trudy gives a lot to the Jazz scene but I’m not sure that it is always acknowledged.  When it comes to the academic world such dedication is all too often overlooked.  I have pondered this and wonder if old fashioned misogyny is at play.

The leading Jazz flute players in the world are now predominately women (Nicole Mitchell and Jamie Baum just won the Down Beat critics poll).   The students understand this issue perfectly as many have voiced it to me.   Progression in teaching or on the bandstand must be merit based and gender blind.

The CJC and especially Roger Manins set a very good example in this regard.