‘Panacea’ is the third of Phil Broadhurst’s ‘dedication trilogy’ series and as fine as the earlier two albums were, this one stands out. Everything about it is superb, the individual performances, the ensemble playing, the recording quality, the cover art by Cameron Broadhurst and above all the compositions. Broadhurst, always a prolific composer has excelled himself here. Instead of theming the album around a particular influence or musician he has tapped into the subliminal forces guiding his creativity.

This is the more difficult pathway and I suspect one that is fraught with risk. Delving into the subconscious mind can produce perverse results, as anyone who has suffered long-winded descriptions of someone elses dreams will know. Working in this way requires a ‘quantum’ approach; be aware but don’t look too closely or what you examine will disappear like Schrödinger’s cat. Poets (and cats) understand this. 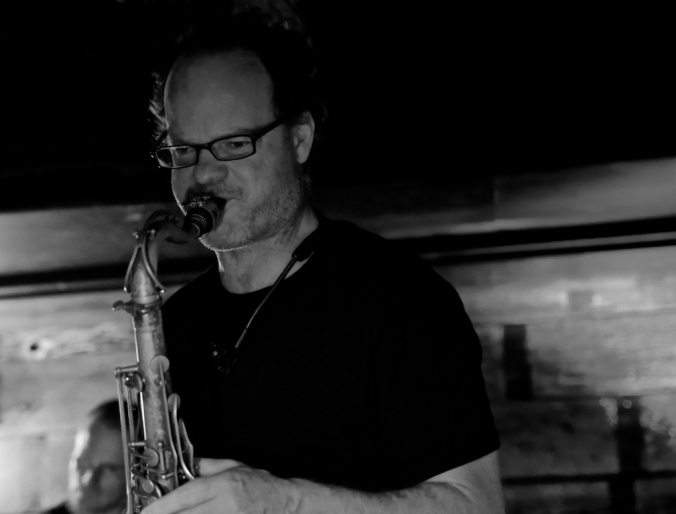 When he composed ‘Precious Metal’ he was at first unaware of the influence until a student pointed it out. It certainly speaks of Horace Silver but more importantly it conjures the essence of the man behind the music. The ensemble playing on this is simply sublime. An arranged head yields to Mike Booth on trumpet. He swiftly encapsulates the ethos of Silver in his delightfully moody solo. Broadhurst follows – expanding on the theme and signalling the direction, effectively setting the tune up for Roger Manins and Oli Holland who follow. There is a logical flow throughout and the piece works all the better because of it. I have heard it several times, but even on first hearing it sounded warmly familiar. That is the skill of good writing; evocation not imitation.

For me the greatest joy was ‘Wheeler of Fortune’ his Kenny Wheeler tribute. So well realised was the mood that it might have been John Taylor playing a Wheeler composition. Again this is an extraordinary piece of writing and articulation, lovely because while capturing the style of these lost lamented greats it reminds us just what made them so dear to our hearts. In spite of being a piece for piano trio you can sense Wheeler reaching for those impossible high notes or mournfully smearing his over-running melancholic lines. It must have been tempting to use Booth’s flugel on this, but the implied sound is all the more powerful.

Like ‘Panacea’, the heart-felt ballad ‘Absent Friends’ is a lament for band mates passed from us; the delicately woven lines conveying a sense of reverence and affection. This is Broadhurst the romantic and Manins demonstrating the best of his formidable ballad playing skills. Another piece ‘knee lever’ begins with Neil Watson’s Pedal Steel guitar sounding quietly above the melody; understated like a soft sunrise casting a glow on the sea. As the piece progresses there are several surprises, first from Broadhurst who imbues it with a distinct rhythmic treatment (like that of Eliane Elias) – then Watson solos – his soaring guitar reaching for the sky. As the horns come in I am aware of a subtle Wheeler influence again. I played it over several times and yes, above the arranged horn phrases I hear a Norma Winstone like wordless voice.

I look in the liner notes, no human voice shown – then it struck me. This is Watson, again understated but adding something to the piece which lifts it into the realm of musical magic – an exceptional and original musician. The album would be the poorer without his contributions. Subconscious influences shape every musicians work and it is right to celebrate those. Purging these influences is often a mistake. All creative people whether writers, poets, musicians or painters have these voices at their core. Improvising musicians stand on the shoulders of giants and it is fitting to celebrate that. Broadhurst has done so with due reverence, due acknowledgement but never sycophancy. This was his time to say thank you and his own original voice shone through the multitude of influences.

Booth sounds better each time I hear him. His undoubted strength lying in the way he reminds us of the great traditional trumpet players – especially those from the Hardbop era (like Blue Mitchell). A wonderful musician, a fine arranger and one who nicely compliments a saxophone modernist like Manins. Playing off the latter gives the edge. Manins is such an original that you hear something new and exciting each time he plays. I have observed before how well he plays off Broadhurst compositions. This says something about the skill of both men.

Bass player Oli Holland and drummer Cameron Sangster are the remaining components of the rhythm section.  Their performances are hard swinging;  understanding the right moment to amp things up or to dial back. Everyone is playing at a high level on this album, everyone is indispensable.

The word panacea is from the ancient Greek meaning ‘all healing’. The modern definition extends the concept beyond cure-all potion – applying it more to the realm of ideas. The album is truly a balm in our troubled times. I highly recommend it as a Christmas present to yourself or a loved one. It must surely be contender for next years Tui’s.