Lately I have attended a number of music workshops. Although not a musician I gain a lot. They offer fascinating insights into the artists creative process and if your lucky, insights into a particular instrument. With music, the more you listen, learn, observe and delve, the more you gain. My reason for attending Susan Alcorn’s workshop was probably different from most attendees. The majority were guitarists anxious to glean practical information or wanting to be convinced that this complex instrument was for them. A handful of others sought knowledge for knowledges sake – dipping another toe in the water of sonic learning. 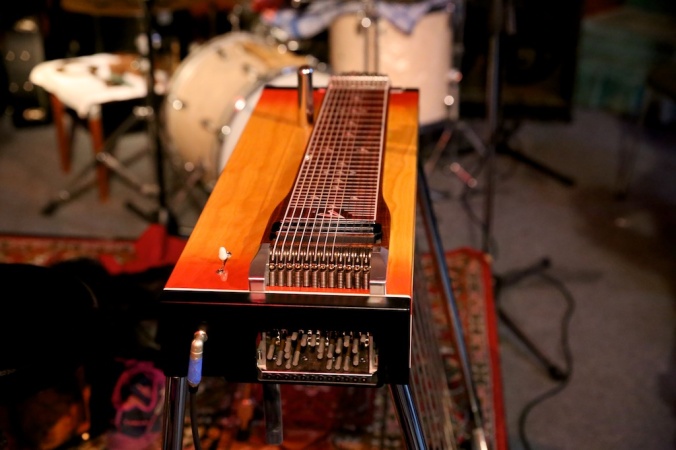 I like the warmth of the Pedal Steel guitar and I appreciate its hard won place in the landscape of modern improvised music. Learning something of its history and its quirks from an acknowledged master took me a step closer to the mystique of that quivering sound. Alcorn is very much at home in the world of experimental improvised music, but that was not always the case. After 30 years of playing country in places like Nashville and performing in the more orthodox styles she jumped ship.

She mentioned the influence of later Coltrane as one of the forces pulling her towards unfettered experimentation. She also spoke of a desire to explore composers like Messiaen and this required specialist tunings. She played us some Monk (as well as original compositions). Her take on Monk compositions was that they were architectural. “He starts with a well constructed base and as he builds up from the ground he plays with the form. He moves sideways creating an overhanging room but it is always balanced elsewhere”.

When younger she committed her self to a related instrument, (the Dobro) and eventually to the Pedal Steel – mastering the Pedal Steel did not come easily. There are many pedals and four knee levels to control. then there are the multiple tunings, a variable number of strings and a plethora of picking styles (also complex slide techniques to master). Few beginners get an easy ride and many don’t stay the course. Some tunings (e.g.Hawaiian) do not work for the blues and so double necked instruments are common – thus allowing for style changes from alternate tunings. Adding extra strings (or pedals) while increasing the options, also increases the complexities. It can take two to four years of practice before new tunings become ‘muscle memory’. Once down you have a world of sounds and possibilities at your fingertips.

In the 30’s and 40’s the instrument was universally popular and pedal steel orchestras proliferated across America. At that time Hawaiian music was particularly popular. Soon after the instrument found its was into Western Swing bands and Rockabilly bands (this is when pedals and stands were added – ‘console steels’). It found its way to mainstream Country music a little later, but it is less popular in that genre these days.

She gave us some insights into the origins of the instrument but pointed out that many of the popular theories are verging on the fanciful.

In the 1950’s you could buy the instruments in most US cities. Now only specialists carry them. Many like Alcorn go directly to a luthier for customised versions. Her 12 string tuning is unusual being C D F A C D E G A C E D. Having 7 pedals and knee levers give you more combinations. Unusually her instrument comes from an Australian luthier and is made of indigenous wood. She said that she wanted that deeply resonant bottom string so that she could play Messiaen (improvising musicians often customise their instruments). Here is a cut of her composition ‘Three Rivers’

Fact file: In the 50’s a Pedal Steel guitar track hit number one in the Billboard pop charts with ‘Sleep Walk’.

A big thank you to Jeff Henderson and cohorts for their tireless efforts to bring us wonderful experimental music. Sounds we would not otherwise hear. If you want to hear superb and often experimental Pedal Steel guitar you should seek out cuts involving Auckland guitarist Neil Watson. There are some located on this blog