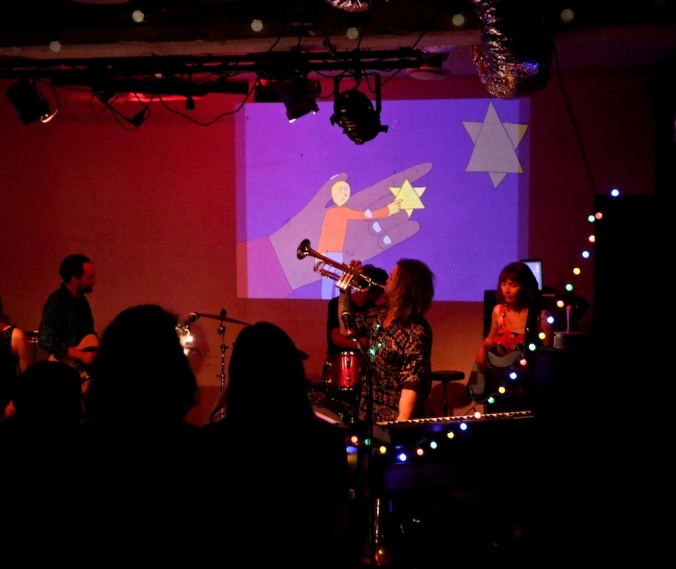 There are a finite number of notes in a scale or colours in the visual spectrum, but an infinite number of possibilities arise. Embracing the latter, multi-instrumentalist, multimedia sculptor and composer Finn Scholes constantly scans the landscape for new material. When he locates something shiny, he appropriates it as a magpie might, storing it in memory until he can bend it to a new purpose. A musician with few boundaries; a disruptor of complacency, his open ears and pioneering disposition equipping him well for his musical explorations. The genius of this music is that the listener will find any number of references, and each according to that persons taste. Any attempt to narrow the music down to a specific range of source materials, or to the prime influences, will, therefore, fall short; there is no correct answer. 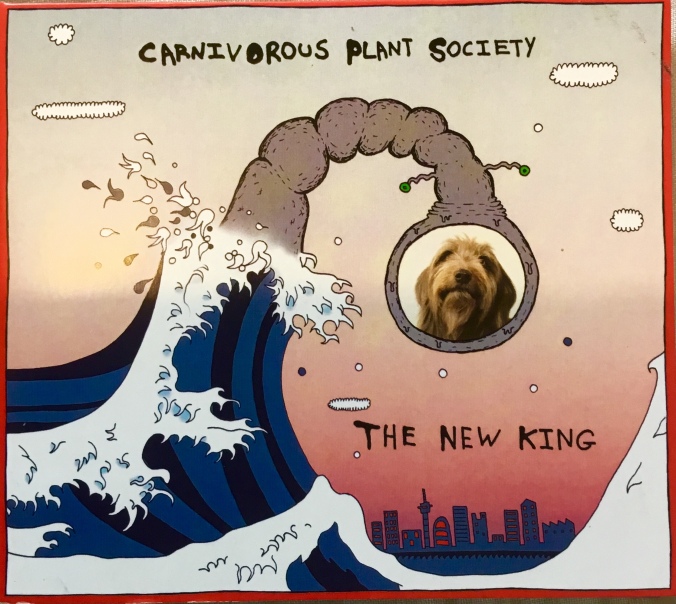 There is an innate human urge to catalogue, look for pattern recognition and to compare and as I am a compulsive assembler of odd lists, I will offer up mine. This was: Bowie, Spaghetti Western movies, Surf guitar, Pink Floyd, a Mexican Soap opera, William Burrows, Lounge music, 70’s Jazz Space Funk, Bill Frisell and above all John Zorn (‘The Big Gundown’, ‘The Dreamers’).  It was also Hokusai, psychedelic poster art and Crum The Bum comics. In my ears, it had Jazz sensibilities and in my eyes, it was the psychedelic Kings Cross of my youth. 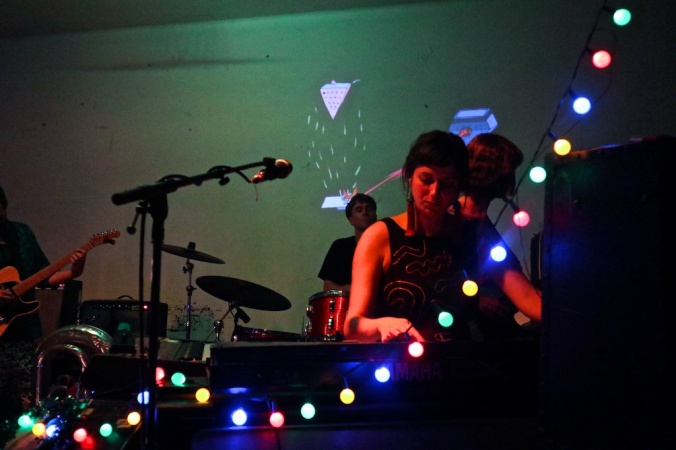 The Wine Cellar is the perfect venue for such a launch. Down Karangahape Road you go, past the revellers and the sirens, past Shanghai Lils with its delightfully dissipated vibe, along to St Kevin’s Arcade, down the wide staircase and through the narrow door (surprisingly not the entrance to a broom closet). Into the bar, through the bar and under the arcade itself. A true home of the Avant-garde and of underground music. It is a vibing place where the sound of music-past leaks out of the air conditioning unit months later. It is so alternative, that the word ‘genre’ gets you chucked out by a hipster bearded bouncer. On this night it was jam-packed with sweating bodies and raised swaying arms; the temperature, so hot that you could fire porcelain. There was no room to swing a cat, but if you did, you would fell several hipsters. It was dark as a nun’s habit at the back while the front pulsed in dancing light. Multicoloured cartoons appeared and vanished just as quickly, playing on the instruments and the faces of the band.  And meanwhile, the excitement grew – it had no means of escape. 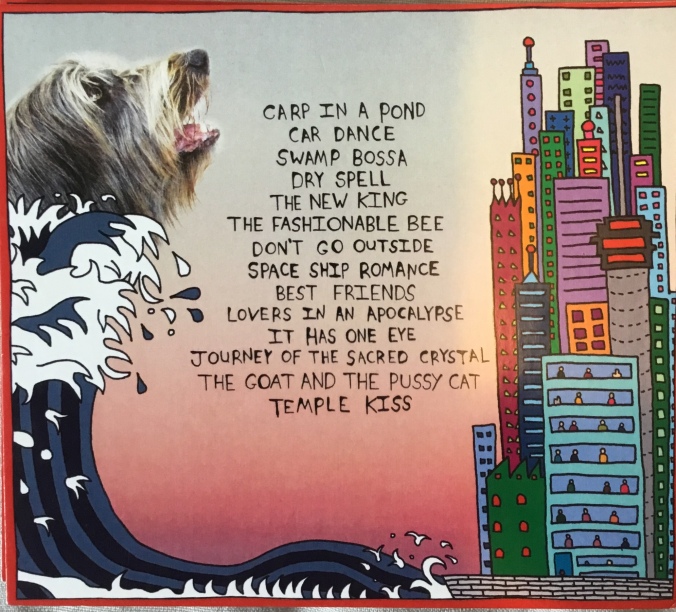 Up front, washed over with film and comic strip characters, the Carnivorous Plant Society; an organic entity with technicolour tendrils; the core band plus a steady procession of guest artists waiting for their cues. Finn Scholes the leader, on a bank of analogue keyboards, an ancient vibraphone, a trumpet and a tuba. At the rear, his brother Tam on guitar, Tam’s partner Siobhanne Thompson on fiddle and vocals. To complete the family involvement, Jeff Scholes, the father of Finn and Tam, read improbable parables, parables which may or may not have had a deeper meaning. The rest of the core line up were Cass Basil (bass and vocals) and Alister Deverick on drums. On vocals during the live performance were Hayden Eastmond, Ed Casterlow and Hollie Fullbrook. Additional instrumentalists were Tim Stewart (trumpet), Nick Atkinson (saxophone) and Lisa Crawley (recorder).  .

The Carnivorous Plant Society has been around for a while. I first reviewed them at a CJC gig in 2015 and liked the way they appropriated media; above all, I liked their vision. Now, two years later, after festival appearances and many gigs, they stand as a fully formed and highly compelling unit; living at the heart of Auckland’s alternative music scene, where the cross-over between bands and styles enriches everyone. Scholes plays with bands like Hopetown Brown, Audrey’s Dance, Swamp Thing, Avalanche City and the Zestnicks. He is also an occasional presence in Jazz studies student performance ensembles and in experimental or avant-garde music lineups. Scholes lives where music is evolving and where genres bleed into each other. A Jazz musician as the ghost in a bigger machine. His Jazz background will remain our secret. 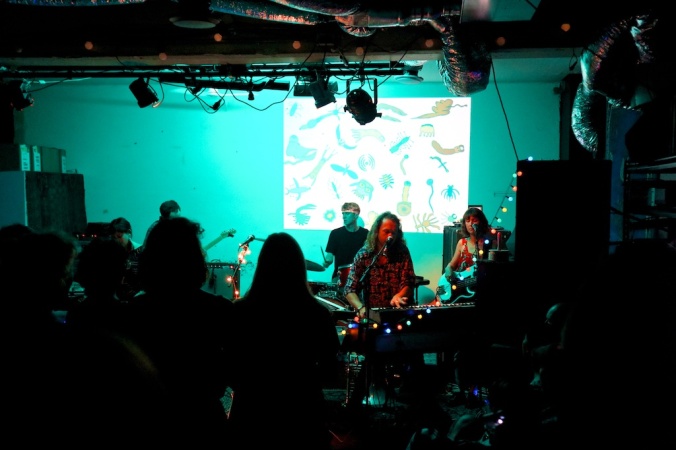 The album will officially be released around March 2018. Additionally performing on the album are Lawrence Arabia, Don McGlashan, Hollie Fullbrook, Hayden Eastmond, Tiny Ruins. The band’s website is www.carnivorousplantsociety.com

My son and his girlfriend were home for Christmas, so I took them to the gig. Both live in central San Francisco and they are therefore familiar with the alternative music and experimental media scene in the Bay Area. The gig resonated strongly with them and they felt right at home. Buy the album, support alternative music and get along to the release gig if you can. 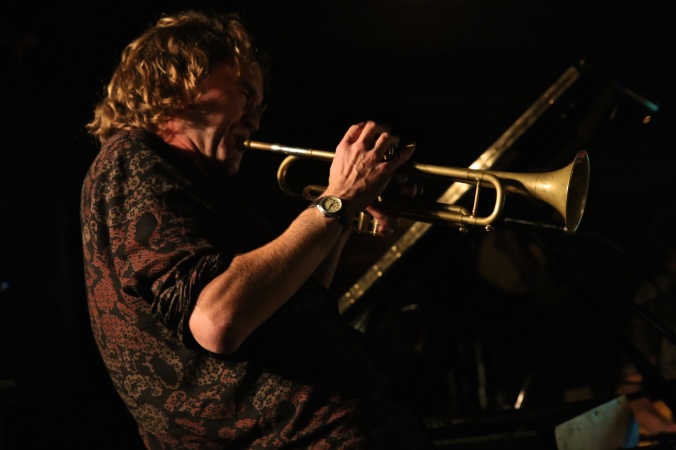 Music has a million functions, some of them mysterious; it is the soundtrack to our lives. One of those functions, should not be underestimated, is to bring fun into our day. In this age of multi-media music performance the use of film and theatre is generally ceded to heavy metal or pop. That is a shame because Jazz audiences can react favourably to music when accompanied by these various forms of media. This works well at the Golden Dawn. Sometimes when the CJC is held upstairs, we get random film and images playing across the musicians as they perform. Who can forget the crazy brilliance of ‘The Grid’ (see earlier post). While happenstance can work; truly effective interaction needs working into a performance and be way slicker than a silly strobe light or an embarrassing disco chandelier. The Carnivorous Plant Society presented a coordinated performance and it enhanced the music on offer. 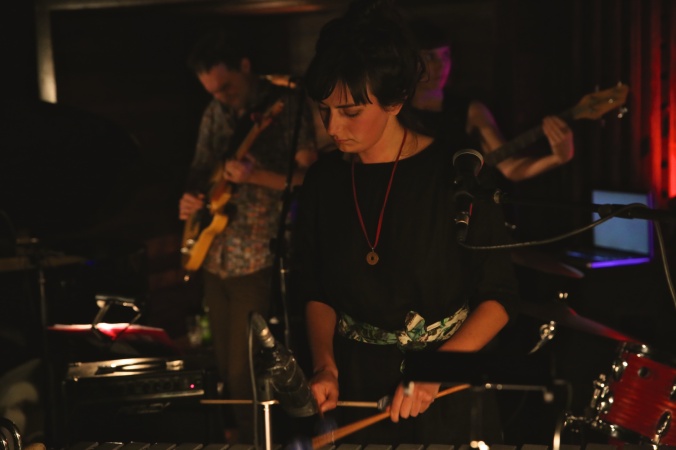 This is very much a Finn Scholes project and it has been around for some time. Scholes is primarily known as a trumpeter (often playing the avant-garde end of town). Increasingly these days he is a keyboard player and showman. Last year I saw him with this group; belting out his signature brassy Mexican trumpet sound while playing an analogue synth with his left hand. The performance often tipped into the surreal because Scholes wore a Mexican ‘night of the dead’ wrestling mask. Not an image or a sound I will easily forget. 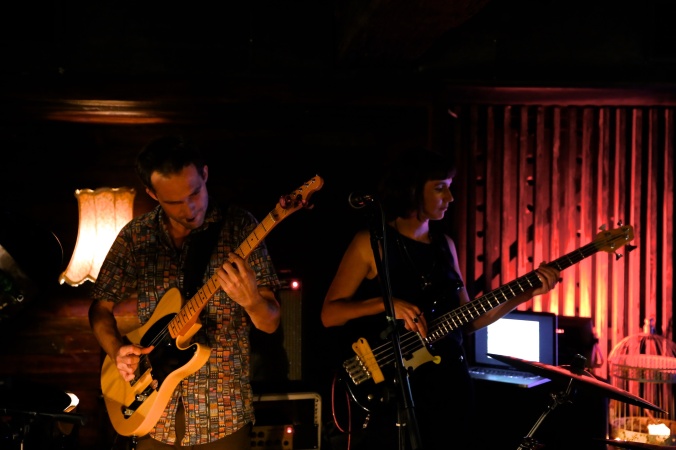 The Carnivorous Plant Society is a quintet but there are many more instruments, pedals and electronic devices than there are band members. Scholes plays trumpet, tuba, piano, numerous keyboards, electronics – Siobhanne Thompson, vibraphone, violin, percussion, pocket trumpet – Tam Scholes, electric guitar – Cass Mitchell, Electric Bass – Alistair Deverick, drums, electronics. With use of loops, wizard like gadgets and Siva like arms, a number of sounds are generated at once. 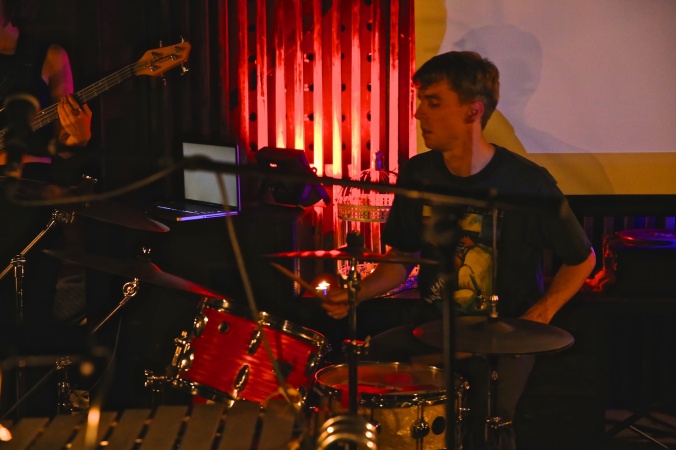 The occasional use of voice-over samples was far from being gratuitous as the ‘Max Headroom’ like humour often lay in these samples. There were strange Stephen King like stories of robots taking over the world and oddly quirky adventures relayed. The latter as if being recalled by deadpan 1950’s radio hosts. Many of these performed against brightly coloured cartoon graphics that played over their heads. The graphics were brilliant and although I have no evidence for supposing this, I presume that someone in the quintet (or a close friend hip to the project) created them.

Finn Scholes has been to the CJC often, but it has been a long while since we saw the fine bass player Cass Mitchell (probably with the Andy Brown band nearly three years ago). The rest of the group are new to the club as far as I know. Billed as ‘cinematic fantasy Jazz with a Mexican twist‘. An absolutely truthful advertising descriptor. As a Zorn, Sun Ra and Zappa fan I can hardly object. 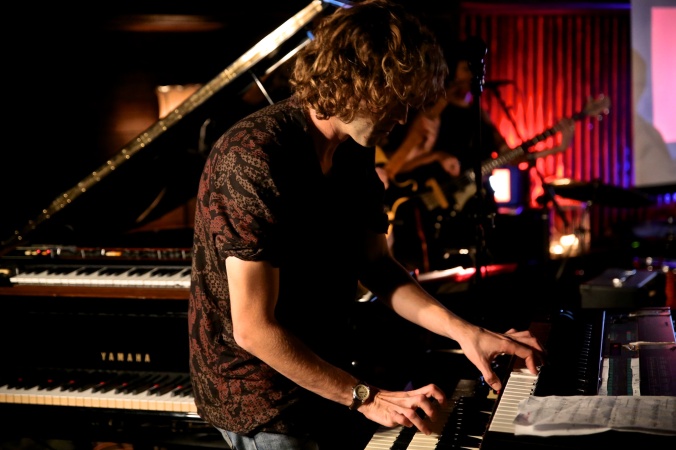