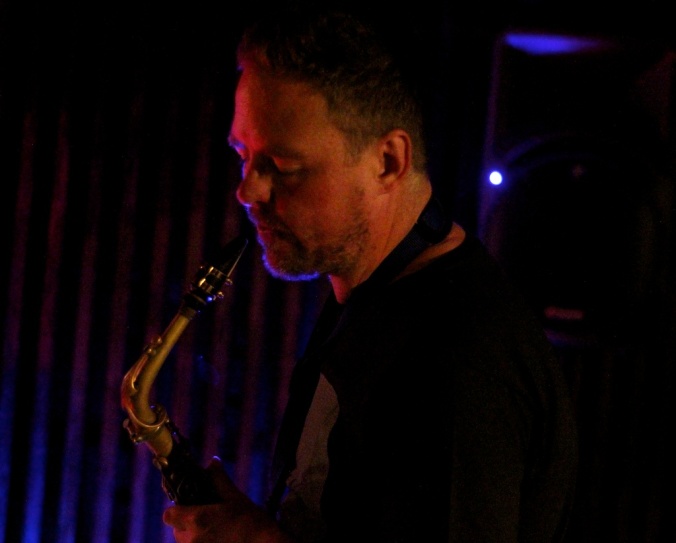 The Auckland Jazz gigs during Jazz April have been high quality (see last four posts).  Above all they have encompassed the breadth of improvised music.  Song FWAA from Australia was therefore a perfect choice to round off a smorgasbord of tasty events.  They (Song FWAA) are quite possibly the illegitimate love children of ‘Sun Ra‘ and while no DNA evidence has validated that theory the lineage is manifest in their music.

As a scene matures listening ears get tweaked through exposure to new sounds.  The demand for a wider range of musical experiences follows that.   This doesn’t happen by accident.  It begins with musicians stepping into uncharted territory and ends with the listener reacting.  The mere mention of ‘adventurous music’ can cause cold sweats from venue management and all the more so if an ‘out’ gig is proposed.  Happily for us Roger Manins of the CJC (Creative Jazz Club) takes some risks  and as the club audiences continue to grow that policy is vindicated.  It is the job of artists to confront or challenge and listeners should welcome this.  Settling for bland entertainment leads to musical confection, not jazz, not art.  Some people are perfectly happy leading the lush life in some small piano bar, but that is not where the music develops.  Improvised music is as much about audience engagement as about performing and without the feedback loop a musical project would become an unheard conversation between band members.  Those who heard Song FWAA, heard edge, originality and musical humour so cunning that no weasel could better it.

The band has garnered rave revues around Australia and their 2011 album ‘Ligeti’s Goat’ is highly recommended.  If you listen to the album you feel that you are listening to a much bigger unit.  At first this seems attributable to the rhythm instrument, which is of the guitar family but quite different in timbre.  This is a specially made 8 string ‘Frame’ played by David Reaston.  The voicings, pickups and pedals used (i.e Moog pedal) give it distinct and very different sound.  Not loud but other-worldly; a strangely subtle sound that can impart real richness.

Martin Kay plays alto saxophone and although this is a standard instrument he also manages to coax a range of different sounds from it.  Martins multi-phonics and extended techniques give depth to the performance, just as drummer Jamie Cameron’s colourist approach and extended drum technique added depth.  At the end of the evening I felt that the musicianship more than the instrumentation created this special groove.

The gig (and the album) was replete with compositional parables about animals and their epic adventures.   Martin is adept at telling these tales; which have a ‘Hunter S Thompson’ quality about them.   ‘Ligeti’s Goat‘ the title track for instance explores the eating-cycle of a goat.   “Tonight” said Martin, “we will only be playing the second section – ‘digesting carrots’ “.   Another number was a moving tribute to a peripatetic Polar Bear.  To quote from the liner notes regarding the tune ‘Olefeig’ (AKA that which should not be shot): ‘Documents the transformation of scenery through the eyes of a Polar Bear, drifting on a shard of ice from Greenland to Iceland, where his destiny finds a bullet’.

A number titled ‘Mugwump‘ was most enjoyable.  The gist of the introduction by Martin was that Aliens had come to earth to seek Moroccan desert fuel and somehow this referenced William Burroughs and the Dogon people of neighbouring Mali.  He had me hooked as soon as he mentioned Morocco and Burroughs.

Song FWAA’s  music is at times ‘free’ and at other times working long ostinato grooves.   This moving ‘outside’ one minute and then playing ‘inside’ or following a melodic hook to its conclusion works.  The group has something to say and they say it with genuine originality.  I hope that they come back soon and share more animal sagas with us.

Their promo material describes them as the ‘wrong band for the right people’.  I love that descriptor, but the one sour note struck was their failure to paint their faces ‘Art Ensemble of Chicago Style’ for the gig.   This is how their webpage profile shows them and we are mature enough in NZ to handle that.  As Roger Manins says, ‘truth in advertising is at the heart of jazz’.  I have no idea what that means but we do love face paint.

This was a CJC Jazz April gig