It was always easy to love Tom Jobim‘s music as it captured the very essence of cool; the exotic new Brazil of the 1960s and 70s.   While the music may not have captured the grim realities of the barrios, it spoke powerfully of the hope and dreams of a new generation; of the educated hip, urban Brazilians.

The media showcased endless white-sand beaches, beautiful bikini-clad girls and lost love under palm trees. But this was the era of exciting modernist architecture, best evidenced in the wonderfully executed, delightfully surreal, Brasilia city.  This city was the revolutionary vision of three men of genius and they curated it from where the jungle sprawled four years earlier.

The President’s futuristic dreams were eventually overrun by greedy money men, a military dictatorship, and powerful elites. The legacy of Brasilia and of that brave new world remains potently in the music. The visionaries were President – Juscelino Kubitschek, architect –Oscar Niemeyer and urbanist- Lucio Costa. It was into this hopeful world where anything seemed possible, that Antonio Carlos Jobim and Joao Gilberto appeared as forces of nature. Before long this unique sound reached larger North American audiences via Jazz super-stars Stan Getz, Charlie Bird (and others). The stories surrounding the Getz/Gilberto (‘Girl from Ipanema’) session are legendary; suffice to say that Astrud Gilberto wife of the talented and co-credited Joao Gilberto was not supposed to be on the session. She was reluctantly included at the last minute. From 60’s house-wife to stardom in the blink of an eye.

It was later while listening to a Rudy Van Gelder session (for Creed Taylor’s CTI label) that I looked deeper. The album ‘Wave‘, has a profound sense of place and everything about it is exotic and beguiling. I love the title song and I have a number of Jazz versions (Bossa Nova and otherwise). It swings like crazy in an authentic Brazilian way. When you listen to Tom Jobim and Elis Regina or to Tom with Brazilian musicians you realise that their time feel is subtly different from anything found in North American.

As with many Jobim albums, the recording is a heady mix of unashamed romanticism juxtaposed with a hint of minimalism (perhaps like Brasilia itself). This is partly due to Claus Ogerman’s arrangements, who remembered to leave open spaces for the individual musicians). The sense of unexpected space in the midst of such lush orchestration speaks directly to Jobim’s genius.

He was a great composer, and a great performing artist. His spidery piano lines and urgent up guitar rhythms are miniatures of perfection; not a single note too many.   ‘Wave’ captures the essence of Copacabna beach, Rio de Janeiro, and Brasilia. Jobim’s own renditions of ‘wave‘ changed with the years; one version on the Warner label ‘Terra Brasilis‘ sounds closer to Delius than to Jazz (until you hear the voicings).

The ‘Wave‘ album cover is a bookmark of the times; iridescent lime green sky, purple Giraffe (or other odd colours in later pressings). I have included an informal version of ‘Wave’ by Tom and a few of his friends. The 60’s clothes may appear strange at this distance, but the music is perfect.

In the late sixties, I saw the French film  ‘Our Man in Rio‘ staring Jean Paul Belmondo three times. I have not seen it since then but I would love to revisit it. It may well appear corny at this distance, as films do with the passing of time, but I will hold fast, as my visions of sixties Brazil cannot be tarnished. I have this album in my head and the mere thought of it induces the heady whiff of nostalgia. 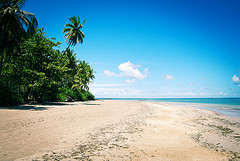