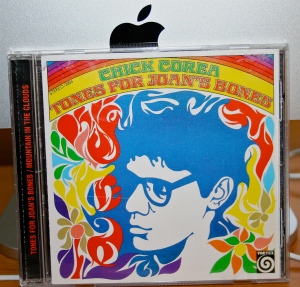 Sometimes we don’t see what is right under our noses and that was definitely the case with me and ace-drummer Joe Chambers.   We sometimes miss drummers or bass players because it is all too easy to be dazzled by the musicians on the horns or guitars.  In Joe Chambers’s case the leaders were cats who blazed with an almost unbearable intensity and this semi-eclipse had blinded me to the intricacies of a hard grooving and in-the-pocket drummer.

I was kicking back with a friend one night when he put on Chick Corea’s ‘Tones for Joan’s Bones’.   I had wanted to hear this album for years and now from the first bar the album got right under my skin; edgy, restless, forward-looking American 60’s Jazz  – featuring Chick Corea (p), Joe Farrell(ts)(fl), Woody Shaw (t), Steve Swallow (b) & Joe Chambers (d).   This was an era when Jazz, (no longer a popular music and competing with rock), let loose a tidal wave of open-ended creativity.  Caught between Ornette Coleman and a burgeoning rock scene, the confining ‘stays’ of Hardbop were suddenly loosened.    ‘Tones for Joan’s Bones’ is a truly great album of its type and the psychedelic art work on the cover is reason enough to buy a copy.   Chick Corea’s song ‘Litha’ with its chromatic mesmerizing energies was the big hook for me and as I listened I became hyper aware of the drummer.

The name Joe Chambers had been vaguely familiar and when I looked him up I was surprised to find that he was the drummer on dozens of my favourite albums.    Classic albums by Herbie Hancock, Bobby Hutcherson, Chic Corea and Freddy Hubbard etc.

As well as listening to the group as a whole we should also develop the ability to isolate the instruments as we listen.  When we do this it is possible to comprehend the levels of interaction and the individual flights of inventiveness.   Jazz is after all a collective enterprise that supports the individual in extraordinary ways.

There are circus acts where a reverse human pyramid is formed on the shoulders of a strongman.   While watching the climbers go higher and higher, we can forget that the whole formation would fail catastrophically if the person at the bottom were to miss-step.  Joe Chambers is the strongman who waits until everyone is standing on his shoulders and then raises them even higher.  This type of drummer carries a lot of weight and in moments of high tension, causes you to hold your breath in case he falls and the band tumbles to earth with him.   Such drummers can stretch time to breaking point as the tension increases and as quickly pull it in again when the outlier musicians need recalling.    Joe is a master of this tension and release.    I may have momentarily overlooked him but many modern rappers have not; zeroing-in frequently on his edgy rhythms.

One thought on “Hidden in plain sight; Joe Chambers”