This was a special night because the band was simply superb and it was a special night because the music paid tribute to Michel Petrucciani.   Phil Broadhurst the leader of the quartet needs no introduction to New Zealand musicians as he has been the familiar face of Auckland Jazz forever. Whether playing as resident pianist in the London Bar ,accompanying visiting musicians or performing his role as senior tutor at the Massey University School of Jazz, Phil has been at the epicentre of the New Zealand Jazz scene.   He is a gifted artist and a prime enabler.

Wednesday was the official launch of the ‘Delayed Reaction’ CD which marked a milestone in what has been a long and interesting journey.   Not only for Phil, but also for those of us devoted to the music of Michel Petrucciani and who now get to share in the journey.   Phil has probably studied Petrucciani’s body of work more extensively than any other and this music is the evidence.

The first set opened with ‘Brazilian like‘, a well-known Petrucciani composition.   This medium tempo number paid tribute to the original but Phil and Roger gave it a slightly more bluesy feel which added interesting dimensions to the tune.   When I listened to that particular track on the album, I realised that Phil had achieved a rare thing.   The voicing and percussive attack were unmistakably Petrucciani, but in managing to add some of the feel and spaciousness of the New Zealand musical landscape he made ‘Brazilian Like‘ ours as well.

Next was the title tune ‘Delayed Reaction'(Broadhurst).  The number built-in intensity without losing any of its beauty and the quartet were obviously focused on treating this original with the same respect as the Petrucciani compositions.   Throughout the two sets there was a perfect juxtaposition between Petrucciani compositions and Broadhurst originals.  Phil had reworked many of the Petrucciani tunes and the result was to create a very satisfying melange.    Other Petrucciani tunes played were; ‘Guadeloupe‘, and the wonderful ‘Looking up‘ – a tune brim full of exuberance and always conjuring up Michel Petrucciani’s infectious good humour which he maintained against all odds.  He would have liked what this band offered up.

Of the Broadhurst originals I particularly liked ‘Oranje‘ (so titled because it was the birthplace of M.P.) and the lovely trio piece titled ‘Matai Bay‘.   During this last evocative number the considerable skills of Olivier Holland (b) and  Alain Koetsier (d) were particularly in evidence.   On the rest of the numbers Roger Manins (ts) shone with his story-telling bluesy intensity.   His performances are consistent in this regard and it is my observation that any group he plays in, is lifted up a notch.

We also heard a few standards and the rendition of ‘You Walked Out of a Dream‘ was fabulous.  Phil increasingly threw challenges at the others and they responded in ways that had us on the edge of our seats.  Roger soon exploded into his solo and the exultant soulful wailing as he seemed to depart from the upper register, had everyone spellbound.   Mike Booths (fh) contribution was on ‘If I Should Lose you‘ and this was also well executed.

A few years ago my partner Darien and I were traveling through the ‘Loire Valley’ France and I spotted a road sign indicating that we were close to ‘Blois’ a town famous for its castles, château and its Houdini association.   It was not those things that drew me to stay there but its association with Michel Petrucciani.     He wrote a wonderful suite about the place; one section was titled ‘Night Sun in Blois‘.   Sitting on the ramparts of that ancient and stunningly beautiful city at dusk I could hear that piano piece echoing in my head as the sun filtered through the now dark mass of the surrounding  forest.    The Loire river was a shinning golden reflection way below us and I wondered if Petrucciani had sat on this very spot when he was inspired to write that tune.

That powerful memory had faded with time but it was sharply brought back to me as I listened to this tribute and I thank the quartet for that.

The album ‘Delayed Reaction’ is on ‘Independent Artists’, a New Zealand label associated with ‘Rattle’ records. 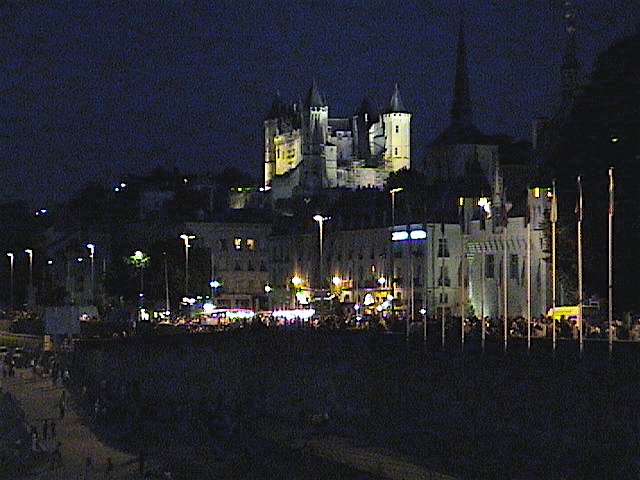 Chateau by night near Blois