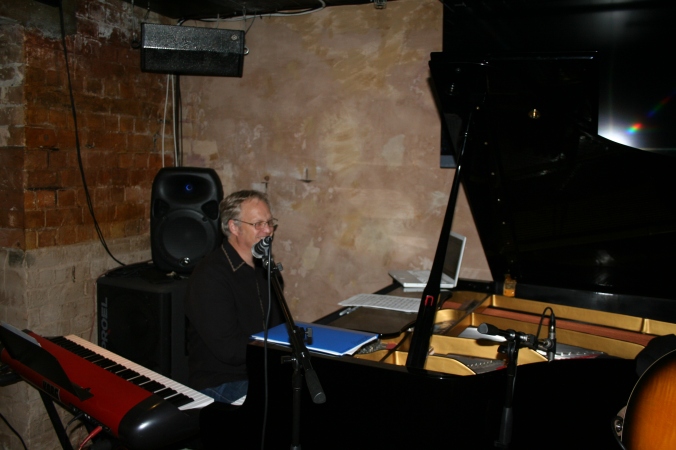 If this was a law court I would have to recuse myself immediately because I have a heavy bias in favour of anything Alan Brown does musically. Having said that it was hard to imagine how this very different lineup would sound, because the ‘Blue Train‘ magic has long been etched into my brain as the archetypal groove unit.

Alan is a superb keyboardist and band leader but above all he is a brilliant arranger and composer. It is the latter skills that have especially come to the fore with this band and the title track ‘Between the Spaces‘ gives more than a hint of the musical direction. ‘Blue Train‘- has always been a tightly focused hard-driving Jazz funk band and one which makes your feet tap uncontrollably. This band builds on that vibe but with new soundscapes opening up, endless possibilities are there to be tapped. Alan’s already impeccable writing skills have been surpassed here, because these charts are everything that an improvising band could hope for. It is ECM meets Funk and surprisingly it works perfectly. In my view Ode Records should talk to ECM’s Manfred Eicher about this group, as everyone would gain by the exchange.

As this was the launch of the ‘Between the Spaces‘ album I had been determined to get to the club early because I knew that seats would be hard to find. I was right because the club filled to capacity before the band had played a note. As with previous Alan Brown gigs the ages of those attending ranged from 18 to 60 plus.

The opening number ‘Sounding Out‘ was a foretaste of the great music that we were to hear throughout the two hours. Over the course of the evening we heard all of the tracks on the album in extended form plus two additional numbers that had not made the final cut. I was fascinated by the textures, rhythms and the colour tones that the new lineup was evoking. As each number unfolded, tight insistent bass lines were being laid down by Marika Hodgson while Alan would often set up a vamp; his left hand authoritatively setting the tone and rhythmic feel. He has an uncanny knack for capturing the essence of a tune while leaving adequate space for the others to build upon it. His deep in the pocket funky chords worked perfectly against his darting upper register flurries.

A treat for me was guitarist Andy Smith. He used quite a few pedals and his tone was midpoint between the Jazz and Rock spectrum. This is a territory well mapped out in modern Jazz guitar and Andy executed the twists and turns without overdoing it. He reminded me of Terje Rypdal at times but his obvious virtuosic abilities were kept tastefully in check and he is to be commended for that. I was especially pleased by his occasional use of the ‘chika-woka’ wah-wah effect when comping against multi layered grooves. Jono Sawyer (d) is already well-known about town and his musicality and his ability to support the band on a cushion of insistent beats rounded off a perfect unit. This group understood very well that great music demands some space between the notes.

As good as this band was, it was the inclusion of the guest musicians that lifted them to perfection. Their addition to the sound pallet showcased the shear brilliance of Alan’s concept and the pieces on which the three-piece string section and well-known saxophonist and flutist Nathan Haines played, lifted the performance into the realm of the sublime.

I have two favourite tracks on the album: The first is the angular, and wonderfully funky “The Dancer & Chess”. This number has complex time signatures but it is so well constructed that an implied centre imparts a level of simplicity that belies the more complex polyrhythms whirling around the changes. This is performed by the core quartet and the counterpoint between band members works well.

The second highly recommended piece is ‘Epilogue’ which features Nathan Haines extraordinary flute work. He weaves in and out of the tunes with such skill, beauty and dexterity that I was left open-mouthed. As if this were not riches enough, the swell of the violins and cello added a perfect layer into the mix. The slightly tart voicings of the strings showed Alan to be a master of composition. He had understood perfectly what was needed and ensured that any hint of sirup was eradicated by using just enough discord. Thomas Botting also featured in two numbers and he fitted seamlessly into the mix. Having an upright bass did not detract in any way from the well established vibe.

Immediately after descending the stairs I had purchased the first copy of ‘Between the Spaces’ put out for sale and it has not been off my Hi Fi since getting it home. If you have any love of Jazz Funk buy this CD and if you don’t buy it anyway because someone you know will be happy to appropriate it.

One thought on “Alan Brown-‘Between the Spaces’ – CJC”