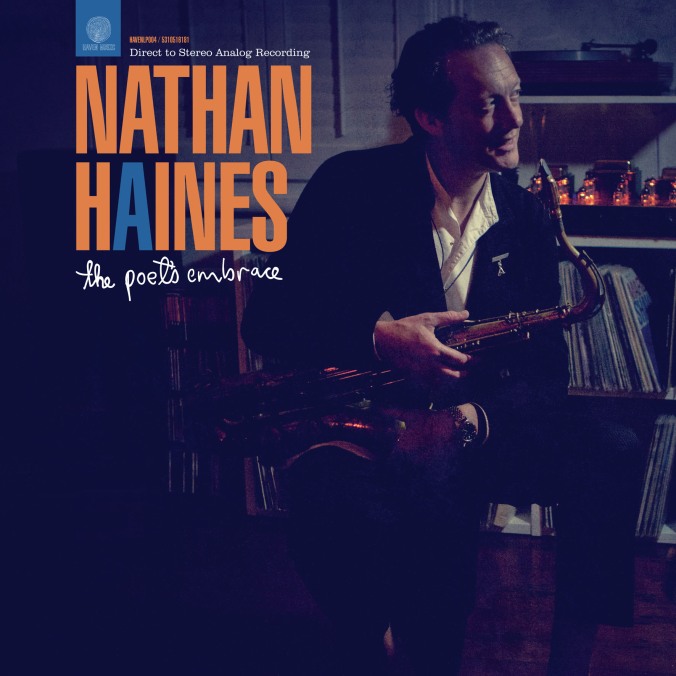 On the 29th November 2011, those lucky enough to be at Nathan Haines CJC gig heard him playing ‘The Poets Embrace’ material.  As far as I know, this was the first public outing for the band and everyone who attended quickly grasped the importance of the event.   Hearing Nathan exclusively playing tenor (and not just any tenor) was intriguing because he is noted for being a multi reeds and winds player.   This gig was somehow different and it had a focus that was palpable.  It was about authenticity and it was about a deeper exploration of Nathan’s music.

Nathan’s approach to his music is a comment on his professionalism.  He divides his time between the UK and New Zealand and he recently headlined at Ronny Scotts Jazz Club in London.  Nathan is one our most talented musicians and I have learned that he never does things half heartedly.

Following that gig Nathan and the band cut an album.     The producer was flown in from London, the vinyl was pressed at Abbey Road, the tenor was a Selmer Mk 6 (ex Brian Smith), The piano was a Steinway B, The recording was made at the York Street studios on analog equipment and using classic microphones….I think you get the picture….glowing valves….absolute authenticity.     Above all this is terrific music and it may become the bench mark for future New Zealand Jazz albums.  The album will be released by Haven Records a division of Warners Music and it should be widely available.

The album is to be released on the 19th March (available on CD or limited edition vinyl)  The promo video is also worth watching as it conveys a real sense of the music we are about to experience.   The attention to detail is evident and one senses that the narrative is an important part of this journey.  People should book now for the launch, which is on Friday March 23rd, 8pm at the Monte Christo Room (behind the TVNZ building Nelson Street).    The entry price for the official launch is $25 pre-sales/$30 at door.  For those who are otherwise engaged on Friday why not get down to JB Hi Fi between 12pm – 12:30pm (any day 19th – 23rd).  If you do you will hear the full band.   It is impressive that a mainstream outlet like JB’s has been so supportive.    Please turn up if you can and this will encourage the store to support more Jazz releases in the future.  If it is wet outside so what, there is no cost to attending and what could be better; Jazz on an Autumn Day.

These are all great musicians as you will soon hear.  They are; Nathan Haines (ts), Kevin Field (p), Thomas Botting (db) Alain Koetsier (d).

For the gig review see my earlier blog post “The Nathan Haines Fourtet”.