We get a number international acts breezing through Auckland and a few of them play at the CJC.  On Wednesday 6th June we were lucky enough to have the Norwegian ensemble Motif at the club and they lived up to their considerable international reputation.   This is a band which plays highly original but accessible improvised/composed avant-garde music .   They are a killing band and above all they are highly entertaining.

Motif played in America a few years ago where they received excellent reviews in the New York Times (Nate Chinen), Jazzwise and in All About Jazz.  They have been around since 1999 in one form or another and were founded by the seriously out-cat Ole Morten Vagan.

It is obvious that this group has big ears as their compositions contain the distant echoes of American and Euro-centric Jazz while still sounding fresh and original.   This is as far from a covers band as you could get, because they gather in the myriad of sounds about them and fashion these into a fresh and exciting soundscapes.  The band may have achieved critical acclaim but they are certainly not above poking fun at themselves.  Ole Mortan Vagan joked several times about their earning potential.   This is a group of musicians who do what they do well and primarily perform for the love of the music. 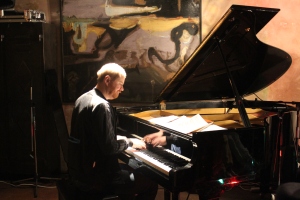 The music was often rambunctious, but the band always drew you back to a collaborative theme after their stratospheric flights of fancy.   The magic woven by individual performers during solos was never at the expense of the ensemble.  It was organised chaos in the best possible way.

I was also delighted to discover that Norwegian humor translates perfectly for a New Zealand audience.  The music was leavened with countless jokes which had us in fits of laughter.   Ole Morten Vagan said that his father had recently accused him of being a bohemian.  When he asked his father to explain he was told, “A bohemian is someone who regards the rent as an unforeseen event”.

The band members were all incredible musicians whether playing as an ensemble or exploring the edge of reason.

At the end of the second set they filed off the band-stand to the sounds of loud enthusiastic applause.  The clapping eventually subsided, but a few determined souls carried on until the band reappeared for a last number.    “That was strange”‘ said Ole.   “At first we heard clapping followed by what sounded like half a dozen potatoes rolling down the stairs – then clapping again.

Roger Manins summed it up perfectly in a recent Face Book post: “Just a heads up for those in Sydney Tomorrow.  MOTIF will be at SIMA– and seriously worth checking out. They were at CJC in Auckland last week and were great– very funny guys too”.    I concur.