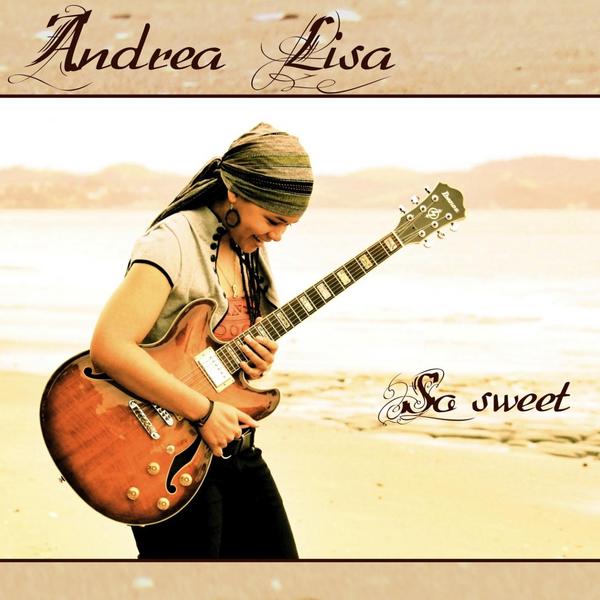 Mid summer 2011 I was walking in the Wynyard Quarter (Auckland’s waterfront area) when the warm sounds of Jazz guitar voicings drew me into a courtyard.  The guitar was being played by a diminutive young woman with a lovely Ibenez JSM hollow-body guitar.  I soon learned the name of the guitarist and introduced myself.   This was my first meeting with Andrea Lisa Groenewald.

Between the sets we spoke of Pat Martino, John Scofield and groove anthems like ‘Sunny’ and its reharmonised form ‘Red Clay’.  I also learned that South African born Andrea had just graduated from the NZSM Massy Jazz School.   We exchanged the odd email and before long I received a notification that the ‘Alex Churchill- Andrea Lisa Band’ would be playing two sets at the CJC – emerging talent night.    That night established Andrea’s Jazz chops before a wider Jazz audience as she and Alex convincingly tackled a mixture of their own material and some complex tunes like Pat Metheny’s ‘Have You Heard’.  To hear this so skillfully executed by guitar, keys, voice and sax playing unison lines was a rare treat.  (see earlier reviews)

Fast forward to late 2011 and Andrea cut an R & B EP titled ‘So Sweet‘.  Andrea was always going to do well.  She is a great guitarist, has a smokey ‘Nora Jones’ type voice, writes interesting material and she looks the part on the band stand.  Since playing that first gig at the CJC, she has gigged extensively around Australasia and has toured with the famous Jonathon Butler Band.   Jonathon Butler is a well-known R & B/Jazz Fusion singer (also hailing from Capetown).   Andrea and the band have been touring Sydney, Perth and Brisbane where they have established quite a following.  They return to Australia this week.

The EP has six tracks: two of them instrumental.   ‘Paint the Sky’ (Groenewald) is the tune that I am most familiar with.   This has been a tour-de-force for Andrea and in more wide open contexts it has been a good vehicle for improvisation.   The other tracks are ‘So Sweet'(two versions), ‘Imaginary Me’, ‘Love Thang’ and ‘Ambition’.  This disk is squarely aimed at the R & B market and because of that I must put in a disclaimer here.  I am probably not qualified to make critical forays into that genre.  What is quite evident however is that this is a terrific album.  Andrea has had impeccable Jazz training and because of that she is very well equipped to embark upon this new journey.  As a singer songwriter she will find a ready market, because she has talent and because she has her own compelling story to tell.  The band members are: Andrea Lisa – electric and acoustic guitar, vocals.  Alex Churchill – keyboards, alto & tenor sax. Nicholas Taylor – bass, Lenny Church – drums.   Guest artist: Lewis McCallum – flute.

The EP is available on iTunes as a download, or you can follow the group on facebook.com/andrealisag

I just had to add this last clip in.   As you will see it is a shaky phone recording of Andrea soloing at a Sydney gig.   Taking on Chick Corea’s ‘Spain’ is challenge enough, but to construct such an amazing solo is mind-blowing.   I saw this clip minutes after the gig and watch it often.

A Plea:  You were great with the AJO two weeks ago and you owned ‘Spain’.   I wish you the very best in your R & B Career Andrea, but come home and play for us occasionally – we like your stretched-out hard blowing Jazz as well – spare us a Jazz moment when you can.