The 13th of March was a night of surprises.   I had been urging Roger Manins to lure Dr Stephen Small down to the CJC (Creative Jazz Club ) for months and here he was.  I told a friend that we would be in for an interesting and varied program.  How prescient I was.  Considering that he is such a well-rounded and accomplished pianist (and keyboardist) it often surprises me that knowledge of him in Jazz circles is not as great as it should be.  Stephen Small has a number of irons in the fire and his work across many musical genres can sometimes eclipse his accomplishments in specific  areas.  No one however should disregard his straight ahead or experimental Jazz playing abilities.

His quartet set up their equipment, completed a brief sound check and then faded back into the darkness of the club while Stephen made last-minute adjustments to his keyboards.  Having set up his two keyboards he moved to the grand piano and picked up the microphone.   Some artists impart scant information about their set lists (even omitting to tell you what they have played).   Stephen is generous with information and his expansive discourse set up the evening nicely. 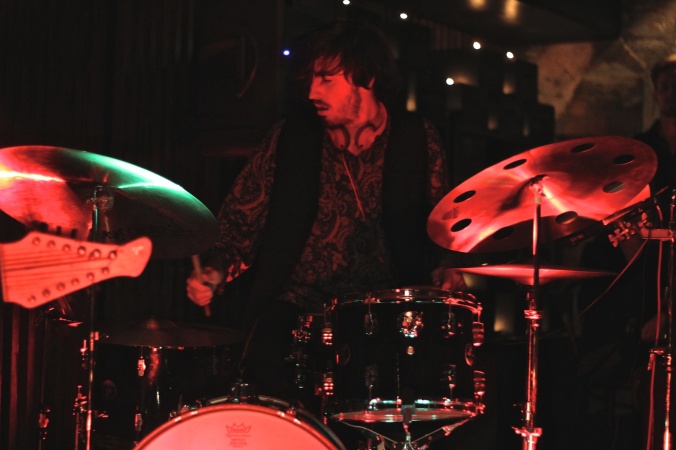 He played solo piano for three or four numbers and the tunes came mainly from the Great American Songbook.  The focus for these pieces was the earlier half of the twentieth century.  During his introduction he talked about the interface between jazz, classical and popular music and to illustrate this melting pot he began with two standards.   First up was the perennial favourite,  ‘Spring Can Really Hang You up the Most’.   The beautiful version he settled on was Oscar Peterson’s.  The second tune ‘Angel Eyes’ (Matt Dennis) has a bluesy feel and the lush right hand voicings accented the subtle hints of stride in the lower register.  I love this standard and it was a delight to hear, as it is seldom played by instrumentalists these days.  More’s the pity.  The last piece in his solo set was an extract from George Gershwin’s ‘Rhapsody in Blue’ (see video clip).    All three were beautifully executed and they illustrated his point perfectly that Jazz is in a continuous process of renewal and will happily absorb the sounds of the day.   What is sometimes under-appreciated is that Jazz also influences and enriches other genres.  Modern pop or rock without its Jazz roots would arguably be a chirpy wasteland devoid of back beats.   Classical music is certainly not exempt either (e.g. Stravinsky and Ravel).

His next set shifted our focus to experimental music.  Stephen Small on two keyboards & piano, Johnny Fleury on Chapman Stick 12 string guitar, MC Chinga Style voice and Stephan Thomas drums.  I am particularly interested in such electronic explorations when they’re done well and these were.  The chordal instruments fed into an array of pedals and the whole set up was something that Bob Moog would have gone into orgasmic ecstasies over.   The Chapman Stick looks daunting to play as the fret board is double the width of most guitars.   It is largely tapped and not picked; giving rich voicings and strong resonant bass lines.   MC Chinga Style added an unusual dimension to the mix and his inclusion was spot on.    He was a benign presence, never dominating.   His contributions were occasional but extremely interesting.  A combination of scatting, boom box, subtle pops and clicks and always reinforcing what was occurring around him.   I have long thought that the human voice as an instrument, playing lines in an ensemble, is terribly under-utilised in Jazz.  ECM gets this right and we need more Norma Winstone’s in our line ups.

Somewhere in the middle of this set Caroline Manins went up to Stephen and whispered in his ear.   Stephen looked startled for a few seconds and then proceeded with his electronic wizardry.     Caroline then whispered in my ear, “there is someone I think you should meet”.    Leaning against the bar was Hugh Masekela, anti apartheid hero, Jazz icon, Afro Beat star.  In the subdued lighting with its soft red overtones it all seemed surreal.  The short 74 year old man stuck his hand out and smiled widely.  Then before I knew it he had enveloped me in a hug.   The great man hugged quite a few strangers that night and I suspect that all were enriched by the experience.    This was Hugh Masekela’s way of telling us that in a diverse and complex world, music can remove any barriers between us.  To paraphrase Herbie Hancock, “Music is what I do but finding a common cause with humanity is my real work”.   He has just been honoured by President Obama for his life’s work.

After the last of Stephen’s numbers Hugh Masekela asked Stephen to sit in while he, his guitarist and drummer played three numbers.  The crowd stood open-mouthed and a little star struck as the band began playing.   A guitar player from South Africa , a groove drummer from America and a Kiwi pianist – working with a Jazz hero.   Hugh placed the flugal horn to his lips and showed us that simple melody can say as much as complex harmony.  He never strayed too far from the melody but somehow his solo’s were all the more profound for that.

He ended the set with Herbie Hancock’s ‘Cantaloupe Island’ and thanked us.  We slipped out into the warm night, feeling very pleased with ourselves for being in that place at the right time.

I have included a link to the Hugh Masekela concert review from N Z Musician.  The concert was a blast.

Q.”There was one occasion when the apartheid government tried to invite you back as an ‘honorary white’. How did that feel?

It was not only insulting, but it was like the height of comedy, right out of the fucking Marx Brothers.  The apartheid people were actors and they had to act out their part in their beliefs every day. That’s why we always saw them as being comedic.”