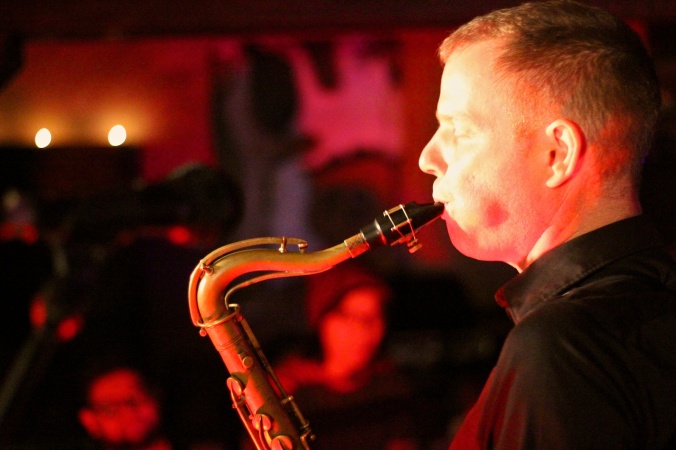 These are very friendly guys.  Actually I find most Jazz musicians unfailingly cheerful and friendly.  It is unlikely that this good humour arises from job security or because they have just managed to upgrade the Porsche .  I stick cameras in their faces, ask searching questions during set breaks and pin them down for set lists when they are suffering from jet lag.   Instead being told to clear off they indulge me.  This goodwill must be pumped through the air conditioning unit of the CJC (Creative Jazz Club).  It is a place like ‘Cheers’ where everyone has a smile and ‘everybody knows your name’.

One of those who indulges me is Steve Garden of Rattle records.  A few weeks ago I received a tidy package of CD’s from him and among them was ‘The Buck Stops Here‘ led by Paul Van Ross.  I had a lot of material to write-up at the time and I was working on the ‘Jazz Month’ program with the Jazz Journalists Association.  I played my way slowly through the pile of releases as time allowed.  It was not until I had received the CJC newsletter that I realised that Paul Van Ross would be doing an album release there in three days.   I sorted through the CD’s and put it out to listen to but it was not until the day before the gig that it finally reached my Hi Fi.   It was a really great album and I played it through three times.

How had a missed this I thought.  This should have been one of the first things that I put on.  Apart from a John Zorn obsession, I also suffer from an excessive liking for B3 combos.  This album featured B3, guitar, drums and saxophone.  I listened over and again while the textures and compositions reeled me further in.  This is a very good example of the ‘new sound’ in organ/guitar/saxophone/drums.

Make no mistake, I love ‘chitlin circuit’ groove Jazz of the sort that Brother Jack, Joey ‘D’, Pat Martino, Wes and Grant Green created.  My friend Michel Benebig is a B3 master in this field and he can groove you to the depths of your soul.   That music will roll you out of bed and have you dancing like a fool before you gain your sea legs.

There is however another type of B3 sound and that reaches for new horizons.  Jamie Saft (Zorn’s Dreamers), Tom Watson (Manu Katche’s new album) and Dr Lonnie Smith (Jungle Soul album),  come to mind.    The music still has a deep groove but there are no locked in drums and this subtle loosening up of the vibe makes space for a particular type of guitar work and gives a horn some room for exploration.  This is a sound that absorbs influences from a diverse Jazz palette while still retaining a solid groove context.  The Paul Van Ross Trio (and quartet) are of this latter kind.  Their music draws on a wide spectrum of post and pre millennial Jazz; not just tugging at the heart and feet, but engaging the intellect as well.

Paul Van Ross is an exciting tenor player and I can’t help wondering if he studied under George Garzone.   There is something different about tenor players who have studied under Garzone and Paul fits that bill.  His rapid fire lines and fluidity never obscure the musical ideas that flow from his horn.  On ballads he could wring a tear from a walnut and when playing uptempo he navigates the terrain with ease.  His compositions are engaging.

The CJC launch gig employed a smaller lineup than on the album.   Organist Alan Brown subbed for Kim Kelaart on the New Zealand leg of the tour and he needs no introduction to New Zealand audiences.  Alan is another musician who takes the groove genre to new and exciting places.  His keyboard skills are legendary.   Choosing him was a sensible choice and while his style is a little different to Kelaart’s, it afforded Ross and Lockett opportunities to stretch out in different ways.  Mark Lockett is a delight as he imparts humour into everything he does.   His drumming is quirky in the best possible way and he is the drummer of choice for many bands.  Like Paul Van Ross and Alan Brown he has also recorded as leader.

The first track on the album is the title track ‘The Buck Stops Here”.  It was the first number up on the night (all of the material has been written by Ross).  On this track in particular Lockett’s contribution was noteworthy.  A solid New Orleans beat is laid down while edgy post-bop lines blow over that; the organ under Alan’s hands comps insistently in the background and this gave the tune a great feel.  I saw a ‘second line’ parade in San Francisco a few months ago and this particular drum beat tells that kind of story.  A story about a beat that bounced between the Americas and Africa until it became pure voodoo.  I like everything on this album and so choosing video clips was hard.   In the end I have opted for ‘The Buck Stops Here’ (filmed by Jenny Sol).   Other standout tunes from the album are ‘Swami in the House’ and the beautiful ballad “Uncle DJ’.  A number performed on the night but which is not on the album is ‘Break a Tune’ (filmed by John Fenton)

I must also mention the guitarist Hugh Stuckey who knows when to shine and when to merge into the mix.  His lines are clean and impressive, with an approach to melody that is modern.  This is the direction that Rosenwinkel and Moreno mapped out and it sits well with this lineup.   A guest guitarist Craig Fermanis appears on track one only.

What: Album Release by ‘Rattle‘.