When the CJC (Creative Jazz Club) posted information about their Winter International Series, the first group up was the ‘Dilworths’.   I quickly scanned the information and zeroed in on the two Kiwi band members.  Not just because they are Kiwi’s but because they are superb musicians and well known to me.  The Dilworths current Pianist Steve Barry is an expat Aucklander, as is bass player Tom Botting.   Both had established solid reputations for themselves before leaving this city and both have since built new ones in Sydney.  On that basis alone locals knew that this was the sort of gig that you brave a rainy night for.   Steve Barry in particular has strong audience pulling power in Auckland and many are aware that he has just won the prestigious Bell Award. 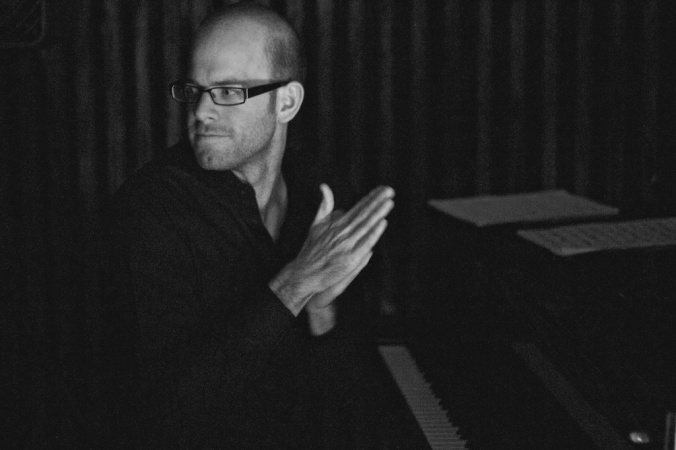 Sydney-sider Eamon Dilworth was relatively unknown to me prior to the Dilworths tour, but it is not a name that I will forget in a hurry.  His band is something else.  Eamon plays a formidable trumpet and he has long been recognised as a musician with much of interest to communicate.  He is a Bell award nominee and the recipient of various scholarships which have led to him traveling overseas and studying in Italy.  He has performed in Romania, Austria, Italy and England and his compositions reflect some of the influences that he has soaked up on those journeys.  While we have some terrific trumpeters around New Zealand we can not match the breadth and depth of the Australians.  Having a trumpeter of this calibre visiting is a rare treat.

Leaders need to exert a strong sense of influence but at the same time they need to know when to stand back and let things happen organically.  The Dilworths appear to have the settings just right.  The camaraderie and the consequent collective output is what works so well for them.  This is at least the second line up for the band and the mix is perfect.  The observant will have noticed how carefully these guys listen to each other, tossing challenges and giving support in equal measure.   What is also evident is how much fun they are having.  There is nothing more off-putting than being confronted by a grim-faced group of musicians whose only purpose is convincing you just how seriously they take their music.  This band was fun, lively and extraordinary.  We all felt that we had witnessed a great show and more importantly been part of one.   This is the essence of good performance and of good Live Jazz

Everyone in the band contributed at least one tune to the gig and the set list was fluid.   The band would play a few numbers and then quickly confer on what to play next.  They had a grab bag of compositions to draw upon and although a random selection process was applied, the set lists formed a surprisingly cohesive whole.  Thomas Botting’s ‘Balclutha’ was just great with Tom and Steve working a groove to the marrow while Dave Jackson (alto sax), Paul Derricott (drums) and Eamon Dilworth (trumpet) created delicious mayhem.  Tom has a following in New Zealand and deservedly so.

Steve Barry’s pianistic and compositional skills are greatly admired in New Zealand and anyone who has purchased his album ‘Steve Barry‘ (Jazzgroove) will understand why.  Last Wednesday we saw yet another facet to his playing.  Not as leader or accompanist but as ‘A’-grade ensemble member.  As with all of this line up he added maximum value without overcrowding his band mates.  Paul Derricott also contributed a great composition and his album ‘Big Sea-Arrow’ (Jazzgroove) is really worth purchasing.  I have hardly had it off my Hi Fi since picking up a copy.  These are all bands to track down and see again and again.  Altoist Dave Jackson is a great soloist, with a lyricism that sets him apart.  There is also something compelling about his tone production (quite like John Surmon’s alto sound).  He and Eamon often crouch on the floor when others are soloing.  I like this as it signals the ebb and flow of performance; as if choreographed.  I love musicians who move and dance and these guys executed their dance moves perfectly.

The influences were many and varied and while you could hear flashes of Eick, Stanko, Douglas and many others, the band still sounded very Australasian.  I have come to value this local sound and I miss it when I travel.   There is an honesty that comes from living so far from the so-called mainstream Jazz world.  Jazz is now finding a universal voice and New Zealand and Australia are feeding into that just as the Europeans have done for some years.  Good music has no borders.  While comparisons are often redundant I do have one to make.  It came to me while I was listening to the Dilworths EP.  They have captured a vibe very close to that of the 65 Miles Quintet.  In short they had a controlled looseness that can only arise when a band intuitively knows exactly where they need to be minute by minute.   ‘If I were a Bell’ was the one standard of the night, with the melody barely expressed before they were paring it back to the bone.  Using the changes as occasional touchstones, working with space, colour and texture as if they were commodities not to be squandered.

Most of the tunes were fast paced but we did have one or two ballads to round them out.  The last set finished with a tune by Eamon.   The musicians put their instruments aside and chanted and we were instantly mesmerised.  While it had some of the feel of an ancient Peyote chant it was subtler than Jim Peppers Witchi-Tai-To.   We loved it and many of us are still talking about it a week later.  The perfect out chorus to a perfect evening.