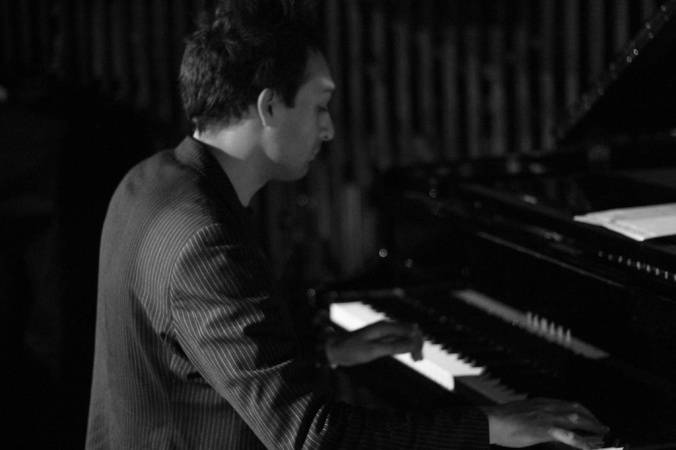 Aaron Blakey is someone you warm to instantly.  He communicates with ease and has a relaxed manner about him.  The same applies to his approach to music.  I have heard pianists who feel that they must astound with every note and while that is all well and good, it can be exhausting for everyone.  The more experienced musicians understand that performance is not only about original ideas, but also about communication.  The latter involves working with an audience while you tell an interesting musical story.  I would place Aaron in that category.

Aaron left Auckland for Japan in 2008 and he gigged regularly around Tokyo.  After a few years he returned to study in Auckland before moving to Sydney in 2011.   On this gig his accompanists were Roger Manins on tenor saxophone, Cameron McArthur on bass and Adam Tobeck on drums.  Roger Manins is at the peak of his powers and after his very successful stint with the JMO in New Zealand and Australia, he is more on fire than ever.   He is one of the best saxophonists in Australasia and so having him in any group lifts their game.  Putting him with a fine musician like Aaron Blakey produces especially rewarding results. 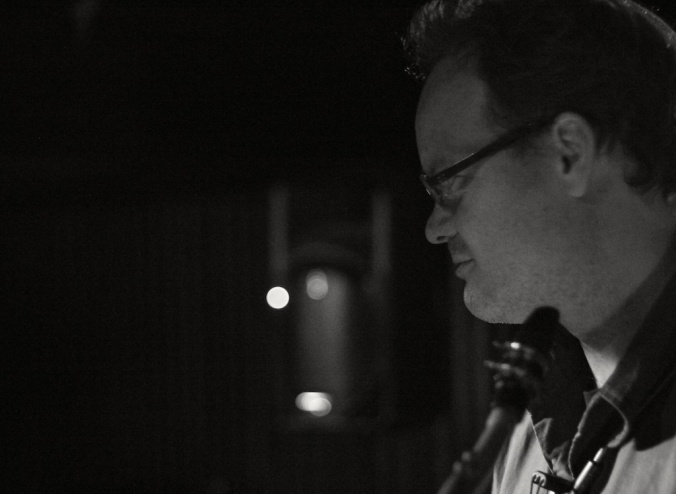 Anyone who has read these reviews or spent some time at Auckland Jazz gigs in the last six months will know just how swiftly Cameron McArthur is rising through the ranks.    He is one of a small handful of must-have bass players when visitors come to town.   Adam Tobeck is fast becoming a regular at the CJC and his abilities were evident at this gig

With two notable exceptions Aaron played his own material and the compositions were all named after people he knows.  With each song, we were ushered into Aaron’s private world.  A world peopled by close friends, eccentric waiters, babies and delightful dancing children.  At the end of the two sets I felt that I would recognise these people if I saw them; so convincing was the imagery.  Live improvised music creates shapes and forms which you can almost grasp, but which evaporate and dissolve in unpredictable ways.  What remains is a series of impressions, a filigree journey imprinted on the ether. 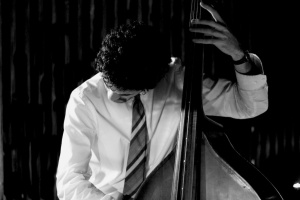 A good example of this was a tune called ‘Sinclair’s Routine’.  Aaron named this after a waiter who worked at a  busy Surrey Hills restaurant.  He was using the establishments piano to practice one morning and trying out a few ideas, when the waiter said, “I like that, it helps me to go about my routine” .    Not your usual musical commentary but it ended up as great tune and gave us a window into that particular moment in time.   It worked for me on several levels but primarily because I could picture and hear the event in my mind’s eye.   There was a song ‘Jonathan B’ dedicated to an old friend from New Zealand.  As Aaron was explaining the origins of the tune he looked up and said, ” Oh there he is, he just walked in – hi man”,  Once again we connected the song to time and place and this gave added weight to the number.

The track that I have recorded on video is “One for Steve”, which is a dedication to the much admired Steve Barry.   This was certainly a connection that hung in the air as the band played through the number.  Steve (another ex-pat Aucklander) had been playing that very piano only a few weeks earlier and the echo of his gigs was relived through the tribute.

The first of two standards was ‘My Song’ (Keith Jarrett).  It amazes me that ‘My Song’ is hardly ever performed.  There is a view that Jarrett’s three recorded versions are so contained, that musicians shy away from it.  More is the pity because most jazz lovers rate it highly.  During the introduction Roger Manins helpfully suggested that Aaron would actually be doing the Elton John “My Song’.   This was a solo performance and you could have heard a pin drop.  It was great to hear it done and great to hear it done so well. 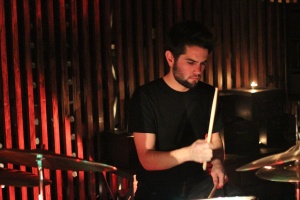 The second standard was the Cole Porter tune ‘I Love You’ from the musical Mexican Hayride, placed squarely in the Jazz Lexicon by John Coltrane (Lush Life album).  While Coltrane’s version was with Saxophone, Bass and drums, The version on this night was a duo featuring piano and tenor saxophone (Manins and Blakey).   That these two have been friends for years and that they have worked together many times before, became evident on this number.   The sensitive interplay between them was truly extraordinary and although they took quite different approaches to the task in hand the synergy was uncanny.  It was one of the wow moments which Jazz audiences live for and to my annoyance I had run out of HD video-tape just a moment before it started.   I am sure that they will play it again sometime, as Aaron has promised to return. We hope that he will not leave it two and a half years this time.

For those wanting more there was a Roger Manins gig down at Frankie’s Bar in Wyndom Street two nights later.   This was a similar lineup, but with premier drummer Ron Samsom at the kit.  For this gig Aaron had brought his Fender Rhodes along.  They swung mightily and as I listened I could hear Ron pulling back on the beat.  There is some fine music around Auckland.  All it needs is our continued support.