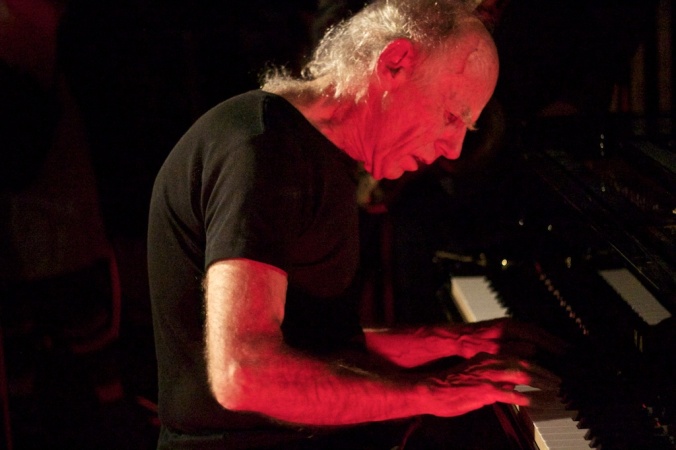 It was sometime in early June when I first heard the news.  I was sitting with Roger, talking music and shooting the breeze about who we rated.  Suddenly he half turned and said, “Mikes coming back to do a CJC gig”.  The words hung in the air like a siren song and for me the impatient waiting began from that moment.  If Mike Nock was coming to town there would be magic aplenty.  That’s what it meant.  That is what it has always meant.

The word seeped out, first to the music students and then to the wider world, like ripples in an ever-widening arc.  The club would be full that night.

Closer to the gig Roger asked Mike who he wanted in the band.  They quickly settled on a trio format, not your usual piano trio but one with piano, tenor saxophone and drums.   Roger Manins on tenor, Frank Gibson on drums.  Mike had jettisoned the anchor for this gig and he was quite definite about that, no bass.   This is a challenging lineup for a pianist (and for the other band members) because no-one is there to hold the centre.   If you slip there is greater distance to fall.  In this different space wonderful things can also happen and they did.  This was a night among nights.

Barely able to contain my impatience I rolled into the club foyer three-quarters of an hour early.   The queue was already snaking back past the basement stairway and well into the upstairs bar.  A seething mass of eager faces.  When the doors finally opened there was Mike sitting sideways on the piano stool and Roger was blowing a few scales nearby.  The music stand sitting to one side abandoned, an unnecessary distraction, in a free ranging gig going where the music took it.

Before the first set I caught up with Mike, talking about his various projects (he was playing with a New Zealand string quartet the next night).  He told me that he was coming back to the CJC with his newest Australian trio in a few months.  Next time bass and drums.  We talked a bit about Jazz musicians from the past, Kiwi’s that he had played with and then the discussion shifted to the older pianists who straddled the swing to bop era.  Like all great pianists Mike lets the entire history of Jazz fall under his fingers and so I asked him about players like Hank Jones and Mary Lou Williams.  When I listen to them I hear such strong left hands, walking chords, syncopation, hinting at a time when ‘harlem stride’ was still an influence.  “The newer and stronger bass players changed that” said Mike.  “As the bass lines become stronger and pickups better the need for such dominant left hand work fell away.  There was too much conflict”.   As a non musician I had never considered that and it all made perfect sense.  I marvelled all the more that Be Bop/Post Bop greats like Hank Jones kept a touch of this earlier style and even when accompanied by strong bass players like Ray Brown, George Mraz and Ron Carter.   I wondered if we would ever see those strong left hand stylists again.   I soon got my answer.

The set list was not really planned and it changed and evolved as the evening wore on.   The numbers selected were all standards, but they were somehow fresh, as if revealed for the very first time.   The first number was ‘When Your Smiling’ (Shay/Fisher/Goodwin 1889) and the second number was ‘Gone With The Wind’ (Allie Wrubel 1937).  Those two numbers coming together had me wracking my brain as to where I had heard them, heard them played together.  Then it came to me, they were both on one of the earliest of the Brubeck Quartet albums.   ‘Dave Brubeck at Storyville 1954’ was a wild live recording that lacked polish but oozed soul and immediacy.  Afterwards Mike announced  that a Brubeck album had inspired him to play that number – bingo.  These are the connections we love.   If you ingest a large dollop of Jazz history the memories will reward you.

As they played through the first set I realised that the lack of a bass had not impeded them at all.  There it was, that strong left hand of Hank Jones, working the mid lower register while wonderful modern chords and runs flew from his darting right hand.   This was a master class for the senses to grapple with, giving us an unparalleled taste of Jazz piano mastery from an oblique angle.  No matter what Mike threw his way Roger matched it as they danced in and out of reach like well matched prize fighters .  These two have an uncanny level of communication.  It was even more evident later when they played ‘Softly as a Morning Sunrise” (Romberg/Hammerstein).  They had been considering what to play next when Frank Gibson suggested it.  Heads nodded in agreement and Frank set the number up nicely with a melodic intro on his traps.   “We will just see where this goes” said Mike, “could be anywhere”and he proceeded to pick at the bones of the melody.   Where it went was somewhere wonderful.  This is where the magic truly occurred, a moment to be savoured by all present.

They had begun the number, sparingly at first, soon more purposefully.  The level of interplay increased as they unpicked the tune.  Soon all three were working and pulling at the tune like it was a joyful game.  As Roger soloed I watched the trio inching up the intensity by degrees.  At first Roger had tapped out time with his right foot as he played, now he was pawing at the ground like a bull about to charge.   Mike was rocking madly and then standing and dancing some crazy dance.  Frank too was rolling with the beat.  By now they were way outside – blowing free of all constraints.   It was a moment to savour.  The moment.

As I watched these three, so attuned, a thought struck me,  Mike Nock is originally from Ngaruawahia, Roger from Waiuku.   These two small country towns are close to each other.  What are the odds that rural New Zealand would produce two musicians of this quality.  Maybe it was something in the upper Waikato water supply?

When Jazz musicians are enjoying themselves there are always moments of hilarity, but on this night the best moment came from an unexpected quarter.   The CJC was full, so full  that dozens of people were turned away at the door due to the fire regulations. Outside it was winter, but inside it was hot as hell.  Mike by now stripped to his T-shirt asked if there was any talcum powder for his hands, which were slippery from the exertion.   Caro Manins duly produced a talcum powder container.  Mike wrestled with the lid for a few minutes and then handed it to someone else to unscrew.   Bigger and younger blokes stepped forward in turn, each saying that they were up to the task, but none could dislodge that damn lid.  “Take it back to the shop” said one, “it’s a faulty product”.  At this point a diminutive young woman took the container from the frustrated men, gently flicked off the child proof lock and opened it.  Men often forget the golden rule in these situations, ask a woman.

During the second set Kim Paterson and Brian Smith sat in for a number or two.   Kim and Brian go back a long way with Mike and both have recorded with him.

As the enjoyment washed over me I could hear the words of Sean Wayland from a month earlier as he announced his gig.  “New Zealand I would like to thank you for Mike Nock”.   With you on that brother.

And a clip by Jen Sol from the same gig: