Trudy Lile has unerring radar when it comes to locating tunes from the lessor known jazz lexicon.  Tunes that she skilfully transforms into glowing vibrant flute friendly arrangements. Her choice of ‘Steppin Out’ is a good example.  Kurt Elling recently sung this wonderful (but difficult) Joe Jackson tune on his ‘At The Gate’ album.  Not only was it a great choice and well executed but her new lineup rose to the occasion; giving her all the support she needed and more.

Trudy Lile last performed at the CJC about 8 months ago and she had a different line-up then.  Last Wednesday she had assembled a particularly solid rhythm section in Alan Brown (piano), Cameron McArthur (bass) and Ron Samsom (drums).  Trudy is often adventurous in her choice of material, mixing reworked standards, originals and virtually unknown tunes scavenged from interesting nooks and crannies.  On Wednesday she held to this course and it paid off.

Among the other numbers performed was a beautiful rendition of ‘Niama’ (Coltrane), ‘Flute Salad’ (Lile) – I love this tune with its swinging happy vibe and another Lile original ‘Domestic Bliss’.   Trudy explained that this number was somewhat tongue in cheek, as her own experiences of domestic bliss at times resembled the TV character Miranda’s.

Trudy Lile is well-known about New Zealand as a gifted flutist.   While the flute is her prime instrument she also demonstrates impressive vocal skills.  We saw both on Wednesday.  I have always sensed a pied-piper quality to her work and as she dances and sways during the flute solos it is impossible not to be captivated.  Dedicated Jazz-flute players have been rare over the years and some critics have been disparaging about the lack of expression in that horn.   If they listened to Trudy they would shut up, sit down and recant.   In her hands the flute has all of the expression you could ever want 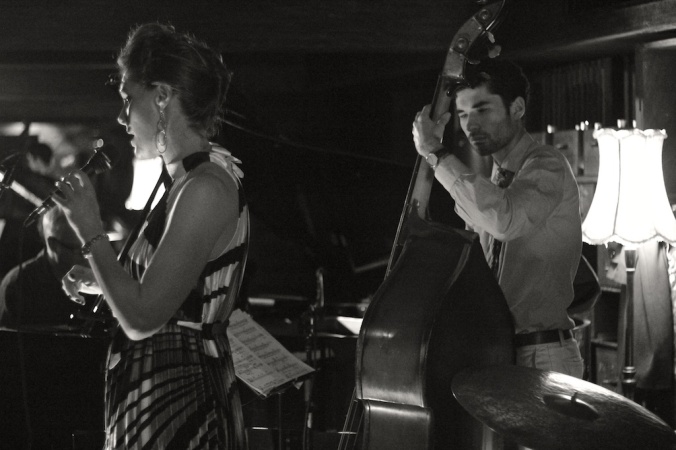 I must zero in on Alan Brown here as he was just superb.  OK, Alan always puts on a great performance but this facet of his playing is not seen as often.  Alan is rightly famous for his soul infused Jazz funk.  He was a power house of inventiveness on Wednesday,but more importantly he established beyond a shred of doubt that he is a stellar straight-ahead Jazz pianist.   His playing is always strongly rhythmic and that is what we expect from Alan, but to see him as an accompanist in this context was revealing.  Anyone hearing a Kurt Elling number such as ‘Steppin out’, notices his arranger and pianist Laurence Hobgood.   Hobgood is a dedicated accompanist of the highest order.   Alan communicated a special quality also.  He supported vocals (and flute) in the way Hobgood does and it was pure gold.  After seeing him in this context I would really like to hear him do a piano trio gig sometime, complete with a few straight-ahead standards.

Cameron McArthur has become the first choice bass player for Auckland gigs and every time he appears (which is often) he impresses afresh.   He is gaining a substantial group of supporters about town and his solos always elicit enthusiastic calls and strong applause.

Ron Samsom is quite simply the best there is on traps and his tasteful underpinning of any band is inspiring.  On this gig he alternated between quieter brush or mallets work and power house grooves which lifted the others to greater heights.   Sometimes when I hear Ron’s drumming I can discern a pulse that goes way beyond the room.  Perhaps it is the pulse of the Jazz tradition itself, the history and the future rolled together in a beat.

This band was the perfect foil for Trudy and she took full advantage of it.