Every Jazz guitarist in Australasia seems to admire James Muller.  Here in New Zealand at the mere mention of him, guitarists shake their heads in disbelief and fall into a contemplative trance.  It is as if you had uttered a secret mantra; one ascribed to an unnamable deity.  I have always been drawn to Jazz guitar and while I need no prompting to follow the genre, pointers like this are irresistible.  When musicians are so highly regarded by other musicians it is generally with good reason.

I first encountered the name James Muller on the 1999 Naxos disc titled ‘Sonic Fiction’.  Even in his twenties there was no mistaking that lovely clean sound, the imaginative improvising and the virtuosity.  Since that time James was awarded a number of prestigious music awards including a recent Australian Arts Council Fellowship grant (two years) and the ARIA award.  These achievements have never gone to his head and he comes across as an artist constantly examining his body of work to see where he could improve.  After half a dozen stints in New York, numerous recordings as sideman and at least four albums as leader he ranks among the premier Australasian Jazz artists.

Because we are getting more highly rated international jazz musicians coming to the CJC, I bailed up Roger Manins and asked him about bringing James back (he was here three years ago).  It was already on his radar and towards the end of last year he told a delighted CJC audience that James Muller would be appearing in early 2014.   I had always been of a mind to seek out one of his gigs and then a chance presented itself.  Roger Manins told me of a gig with Mike Nock, James Muller, Dave Goodman and Cameron Undy at the 505 in Sydney.  It was time for a family visit, so I headed to Australia.  Seeing the Manins, Muller, Nock band was a highlight.  Now a few months later I looked forward to the Auckland gig. 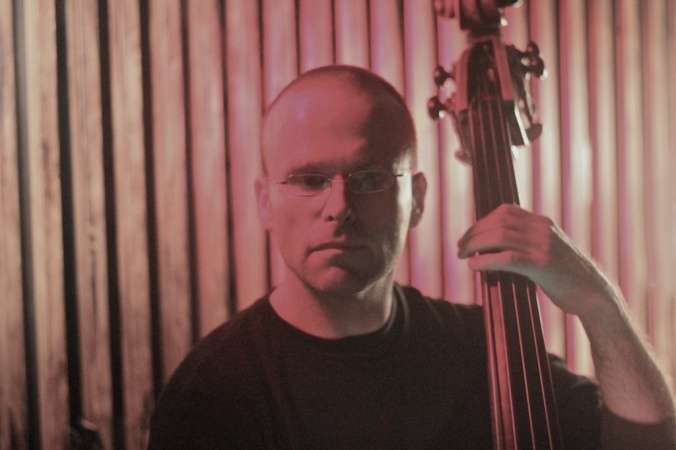 Roger Manins, Oli Holland and Ron Samsom were to accompany James at the CJC.

I have learned that James generally avoids playing with pianists, but there are certainly exceptions to this.   His longtime friends Sean Wayland and Mike Nock would top that list of exceptions.  In Auckland he expanded his default guitar trio format to include Roger Manins on Tenor sax.  When James and Roger play together the guitarist generally lays-out during solos.   This allows for the intensive probing improvisation that both are known for. What we saw on the 12th of March was Jazz of exceptional quality and a packed club.   They queued early, mostly younger people and among them numerous guitarists who had just been to the masterclass at Auckland University.

The set list was a mix of James Muller compositions, some standards and a Roger Manins composition.   Most of the heads were often approached obliquely and what followed were long solos and unencumbered explorations.  This was a chance for the musicians to stretch out and they certainly did.  In contrast was the standard ‘Moonlight in Vermont’.  A lovely tune and one played less often these days.  Unlike the other numbers there was no laying out during the saxophone solo.  It felt right to approach this lovely tune with tasteful comping and soloing closer to the melody.  They later played a fast paced version of ‘Rhythm n Ning’ (Monk), a killing ‘More than you Know'(Rose/Eliscu/Youmans) and absolutely best of all a Lennie Tristano number.

I am an acolyte of the Tristano cult and I doubt that anyone could ever deprogram me.  To hear ‘317 East 32nd Street’ performed so well was bliss.  As Roger and James ran those memorable unison lines I felt the joy wash over me.  Here was a tune I truly loved and they had even included the car-horn sounds that had so influenced Tristano when he composed it.  Tristano once told a musician, “this tune was composed in front of an open window, while listening to the New York street sounds outside”.

Both Oli Holland and Ron Samsom gave exceptional performances during the evening.   Oli with his Slam Stewart like sung unison lines during his solos.   Ron with his subtle and interactive drumming on the slower paced numbers and his blistering explosions of white heat on the burners.  I have read that James likes the bass as an anchor and the drums to work more outside.   That is what he got. 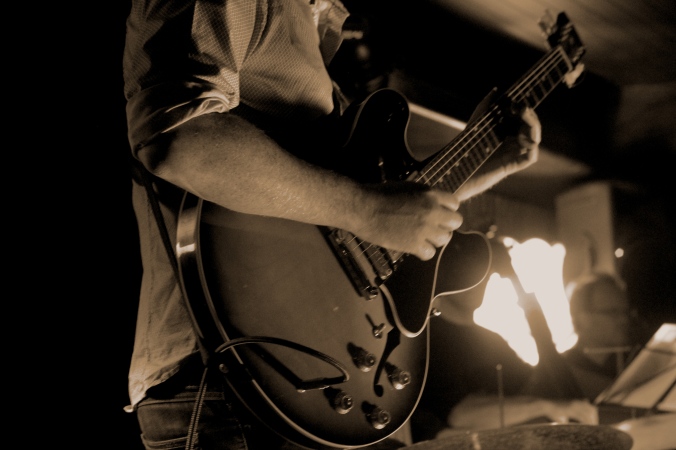 I have spoken to James on several occasions now and he seldom discusses his accomplishments.  This is not false modesty or even shyness, but rather a manifestation of that classic antipodean sense of understatement.  It is the hallmark of Australasian musicians that they are often self-effacing, preferring to use throw-away-lines or obscure insider humour in verbal communication.   I have often observed this in local musicians and it fascinates me.  It is particularly evident in their bandstand banter. When I meet American musicians they seldom come across as self-effacing.  There is an ebullience about them that underpins the conversation and selling their accomplishments comes naturally.  It is seldom the same with Australian or New Zealand musicians who rely on their music to speak up for them.

We hear many fine guitar players at the CJC but this gig would rate among the high points.