There are some musicians who arrive on earth fully formed, having journeyed from distant planets.  Sun Ra was one of those.  There is yet another category of musicians who are not aliens, but who clearly hitch a ride with aliens from time to time.  The Grid is one of the latter, as there is no other explanation for their mix of in your face humour, outrageous musicality and otherworldliness.   They have been to Auckland before when I reviewed them for this blog (read ‘The Grid off the Grid’).  This is their second coming and it has long been anticipated by local musicians, metal jazz fans, mental Jazz fans and those who enjoy amazingly improbable improvised music.  People of all ages attended, as the censorship restrictions had obviously been overlooked. 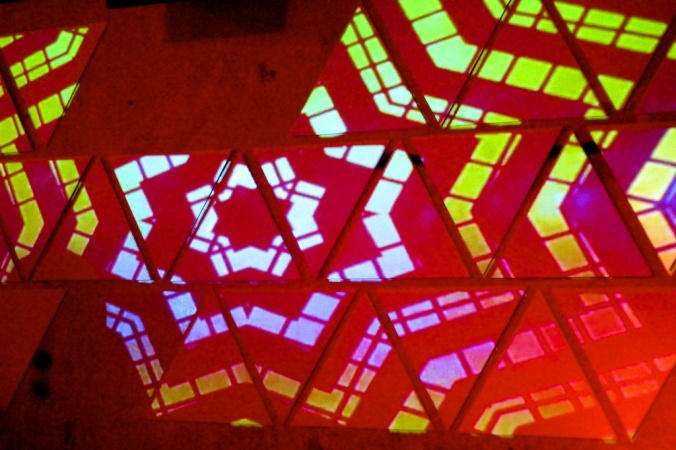 Reinforcing the view that ‘The Grid’ had been beamed in from a spaceship, was a light show that eerily played across them as they performed.   The gig was not in the usual basement spot, as we had been booted upstairs for the night by the building owners.  Being upstairs means psychedelic light show and being upstairs means playing to people at barely visible tables rather than to people sprawling on leather couches or sitting cross legged on the floor.  Some musicians are less comfortable in this space, but The Grid appeared to thrive on it.  As ever changing patterns played on the walls above them, or descended to spotlight their instruments, they worked with it.   This gave the gig an oddly surreal atmosphere, as isolated instruments or disembodied heads floated strangely in the air.

The set list was replete with new tunes, all introduced by Ben Vanderwal as he joked his way from number to number.  This was proper Antipodean humour; highly irreverent, at times dry and always delivered with a pinch of intellect.  At one point a dissertation on Kylie Minogue’s lyrics occurred (she should be so lucky), at another a series of imponderable questions were left hanging in the air.  “What if god were one of us?  What if U2 were from Brazil?   Before we could grasp the enormity of these questions, the band had launched into an astonishingly good version of ‘Sunday Bloody Sunday’ (U2) based upon that premise.  The ideas may have appeared random, but they actually supported an interesting narrative that runs through all of their gigs.   These guys are very good musicians and it is not hard to fathom why alien beings would want to abet them on their journey. 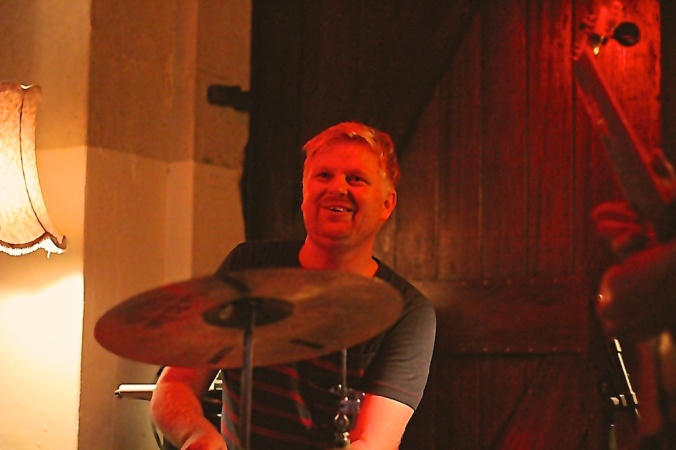 I have included a video clip of a composition by Dane Alderson titled ‘Hitch’.   The tune was written to honour iconoclast Christopher Hitchens at the time of his passing.  Sometime during the second set the guitar amp blew up and after a bit of head scratching it was mysteriously re-routed.  A casual observer might think that it was appropriate that a band delivered to us by mysterious forces should disappear in shower of coloured lights and sparks.   I am confident that someone will find a way to beam them back soon.  We like them here in Aotearoa.