An array of guitar pedals is sometimes deployed to hide a multitude of sins, but in the hands of a skilful improviser the opposite occurs.   Yeahyeahabsolutelynoway! illustrate the best of modern guitar work as they invoke past, present and future.   Their gigs feature their own compositions, with performances drawing upon influences as diverse as rock, country, experimental improvised music and traditional Jazz.  They juggle these competing influences skilfully while still imparting a surprising degree of subtlety.  I have sometimes seen Jazz guitar traditionalists roll their eyes at the sight of pedals, but I would respectfully suggest that they haven’t been paying proper attention to their Jazz history. 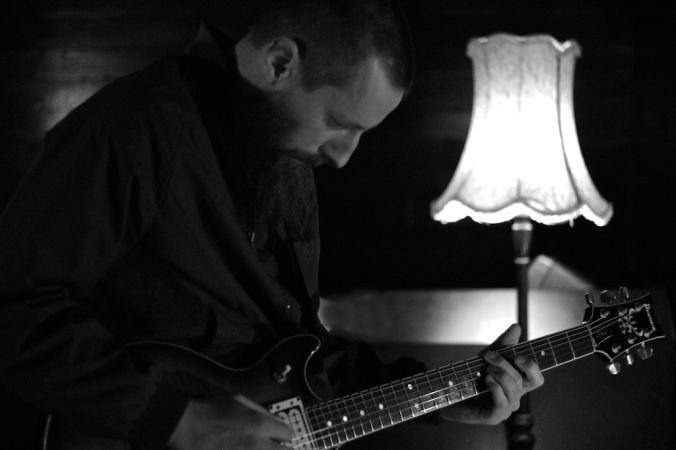 Everyone from Charlie Christian onwards embarked upon a never-ending quest to change, modify, enhance and above all to extend their sound options.   Without those open skies explorers and without enhancements, the use of the guitar in boisterous Jazz lineups would have reached its high-water-mark with Freddie Green.  I love Freddie Green with a passion but the guitar is about more than chords.  Almost every instrument used in Jazz today is modified or extended in some way.   Putting a trumpet through a pedal and working in real-time with loops created by multi phonic effects does not mean that the musician is cheating.  It must be about integrity and the sound.  Beneath the right fingers improvisational integrity and storytelling always come to the fore.   Yeahyeahabsolutelynoway! understand that.

‘Yeahyeahabsolutleynoway’ are the latest addition to the impressive Rattle Records stable.  On the 16th July they did an album release gig at the CJC and for those who braved the winter night it was a treat.  I had listened to the album in advance and so I knew what to expect, but to see them in action held a few surprises for me.  I had wrongly imagined that there would be pre-recorded loops but this was strictly live music.  Every effect we heard was created in realtime, with the constant adjustments from both guitarists giving them an immense palette to work with.  If the sound scape was impressive the tunes were even more so.

There is something special going on with Australian guitarists at the moment and this band and ‘The Grid’ are occupying a unique space in the antipodean Jazz spectrum.   In the case of ‘yeahyeahabsolutelynoway’ there is no bass guitar, not even a five string.   It is not that unusual to see two six string jazz guitars together in a trio with drums.  What is more unusual is when neither of them takes on the traditional rhythm duties.  These guys were often working the same space, swapping lines or converging on a passage to create a subtle filigree.  While they worked as equals, they never appeared to intrude or crowd in on the other, so attuned they were.  Their focus was always on the subtleties of the music and this made for a good listening experience.  On a beautiful Ibanez solid body guitar was James Brown, who looked more like a member of ‘Z Z Tops’ than his namesake.  On a classy looking blond Fender Tele was Sam Cagney.  Both could be seen crouching at various times throughout the sets, as they coaxed beguiling sounds out of the pedals and all the while playing on through.   The drummer Stephen Neville was vital to the mix and created a seamless flurry of beats or subtle whispers on brushes as required.   It would be hard for me to pin down his drum style other than to say that it was effective and impressive.

The tunes in the set list and on the recording were varied in approach.  A fun number is the rock influenced ‘Why Sleep?’  When I put the album on at home my partner Darien immediately replayed ‘Why Sleep  over and over.   It is the one to hook you and draw you in.   I liked the Americana feel of ‘Down home’.  It wouldn’t have been at all out-of-place on a Bill Frisell album.  The album was recorded live in Adelaide South Australia where the bands originates from.  Rattle is definitely on a roll this year (yeah, shake rattle & roll) and as the label goes from strength to strength, the CJC (Creative Jazz Club) and the Jazz audiences benefit.   Keep them coming Steve Garden!

A foot note:  I see that Columbia University is now running a Computer Science course on programming for Jazz Musicians.  As Melhdau and others increasingly follow the footsteps of Herbie Hancock in using programmable devices to extend their range, such courses can only grow in number.   Don’t be too dismayed, this is improvised music folks!  Jazz will strike out in any direction that musicians take.   It is up to us to keep up.