‘Troubles’ come in many forms and what a proliferation of ‘Troubles’ we have seen in Auckland. In mid 2012 we saw a nonet replete with a sizeable string section (and clarinet). Earlier this year at the Auckland Jazz Festival we saw a septet (strings, no clarinet and with Roger Manins on tenor saxophone as guest artist).  By Wednesday December 10th 2014 all trace of rosin was purged and the sweet sounds and fresh faces of the front line string section replaced by three tall bearded men clutching saxophones (and a shorter clean-shaven trumpeter).  This was a bold and brassy line up; a weightier manifestation, delivering anarchic messages from darker corners.

This was too good an opportunity not to record and Rattle did just that.  Capturing chordal instruments in a space like the CJC is challenging as the sound has a number of hard edges to bounce off.  Recording a live performance of this particular brand of ‘Troubles’ might work well. 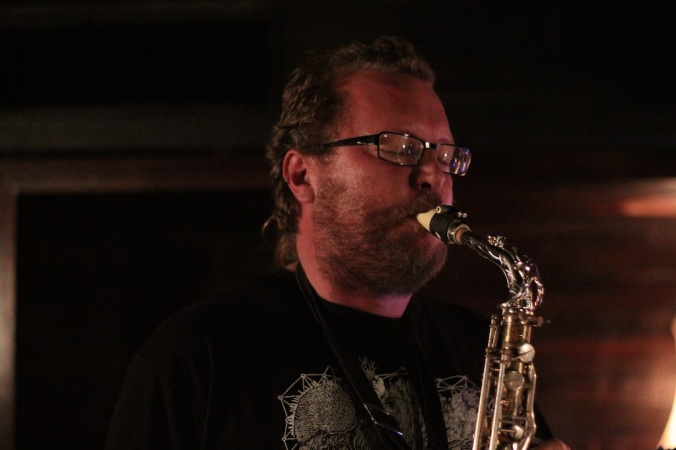 Guiding the proceedings with his well-known brand of anti-establishment megaphone diplomacy was ring master John Rae, ‘Troubles’ co-founder.  He shepherded the ensemble through a constantly shifting landscape. His effervescent flow of joyous and often irreverent cries only stemmed by Patrick Bleakley’s timely interjections.  Rae is the supercharged engine room, but Bleakley is clearly the anchor.  Like Rae he’s an original member. 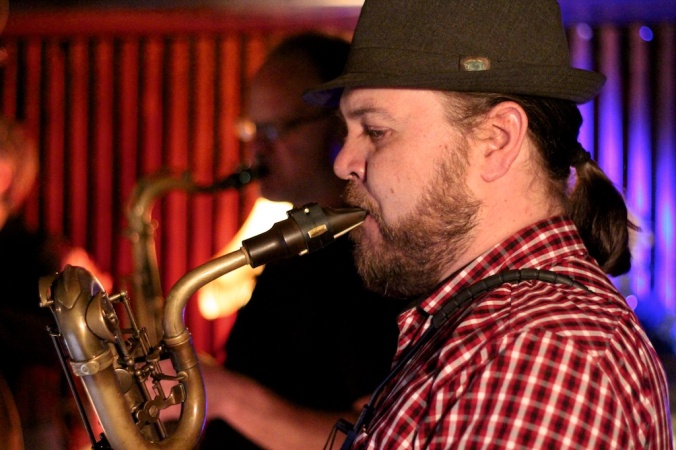 With this Auckland horn section in place, a new front had opened and the tweaked charts took maximum advantage of that. On baritone was Ben McNicoll and his presence gave the sound added bottom. Roger Manins, who had stunned us with his wild death-defying solo’s at the Troubles Portland Public House gig was on tenor again.  Jeff Henderson took the alto spot and that was a significant addition. His ultra powerful unblinking delivery was the x-factor.  Unafraid of repeated motifs but able to negotiate the music without ever resorting to the familiar. That is the Henderson brand, original clear-cut and uncompromising.  In no way diminished by the powerful reed instruments surrounding him was Kingsley Melhuish on trumpet. Melhuish has a rich burnished sound and like the others, he is no stranger to musical risk taking.

Together they evoked a spirit close to the earlier manifestations of the Liberation Jazz Orchestra. Not just the rich and at times delightfully ragged sound, but the cheerful defiance of convention and discarding of political niceties.  Rae’s introductions were gems and I hope some of them survive in the recording.  He told the audience that it had been a difficult year for him. “It was tough experiencing two elections in as many months and in both cases the got it woefully wrong” (referring to the Scottish referendum and the recent New Zealand Parliamentary elections). “there are winners and losers in politics and there are many assholes”. 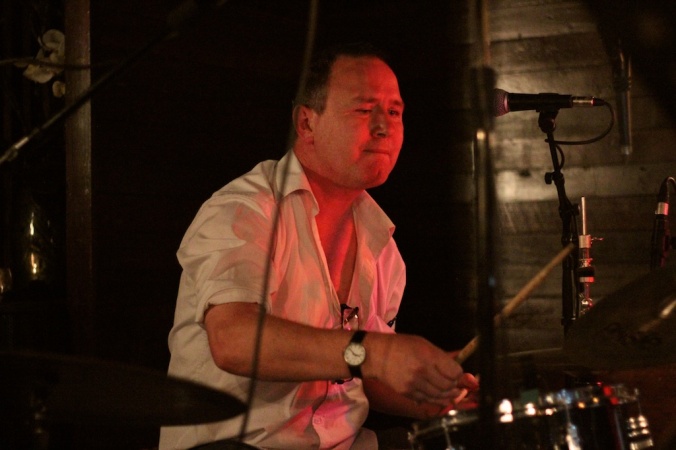 It wouldn’t be the ‘Troubles’ if there wasn’t a distinct nod to some of the worlds trouble spots or to political events that confound us.  I have chosen a clip ‘Arab Spring Roll’ (John Rae), a title which speaks for itself.  Following the establishment of a compelling ostinato bass line, the musicians build a convincing modal bridge to the freedom which follows.  Chaotic freedom is the perfect metaphor for the ‘Arab Spring’ uprising. The last number performed was the ANC National anthem and as it concluded, fists rose in remembrance of the anti-apartheid struggle.  It is right that we should celebrate the struggles for equality, but sobering to reflect on how far we have to go. The Troubles keep our feet to the flame, while gifting us the best in musical enjoyment.