On Wednesday five well turned out ‘men in black’ suspended time at Auckland University. This was a rare event, pairing two of New Zealand’s best known and best-loved contemporary tenor players. The invitation only concert billed as ‘Nathan Haines meets DOG’ kicked off of the Universities 2015 Summer Concert Series. New intake students attending (or viewing the video clip) discovered just how high the standard is; they also realised how lucky they are to have these teachers and these role models.

The Nathan Haines/DOG line up can rightly be described as a super-group; the cream of New Zealand’s improvising artists. We saw Haines at his best here as he showcased his formidable talents on tenor saxophone, soprano saxophone, flute & vocals. He is a multiple New Zealand Music Awards winner and perennially popular in New Zealand and London where he is now based. The DOG band members are all senior teaching staff at the Auckland University Jazz School (Faculty of the Arts). Collectively Ron Samsom (drums), Roger Manins (tenor saxophone), Oli Holland (bass) and Kevin Field (piano) form a dangerous new breed. The agility and intelligence of the animal has led many

to speculate on its lineage; some suggesting Greyhound crossed with Border Collie? We will never know unless the parents own up, but it is beyond dispute that each band member has multiple acclaimed recordings to his credit. DOG is one of three groups short-listed for the 2015 Vodafone New Zealand Music Awards.

Supergroups are not always successful as promoters will tell you. It may seem counter intuitive, but there are many pitfalls in the format. Artistic and stylistic sensibilities can conflict and while less of an issue in Jazz, the rider still applies. Not every configuration gels. Putting two titans of the tenor together is an old concept and it was very popular in the 1940’s and 1950’s. These jousts or ‘cutting contests’ and the so-called battles between Lester Young and Bean (Colman Hawkins) have attained legendary status. There is a lot of mythology in the subsequent 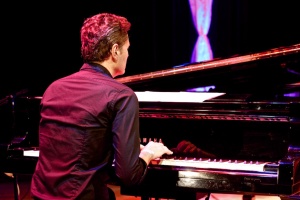 reportage and most musicians view the exchanges as a chance to collaborate; not cut someone down to size. It is an opportunity to challenge and be challenged; a high level musical interaction between equals. At its best it can bring out something special in both artists and Wednesdays gig achieved just that.

Manins and Haines played classic Selmer Mk 6 tenors but in the hands of each the instruments sounded different (although manufactured just 3 years apart). Their beautiful full-throated tenors blended perfectly and especially during the heads; creating a fat rich sound. The instruments when coaxed by experienced players like these, magnify subtle differences in tone. There is an attractive melodic thoughtfulness to Nathan’s improvisations, while Roger’s explorations can impart a wild edgy heart stopping quality. Both find their bliss and share it with the audience. This pairing on this night, will long be talked about in Auckland. 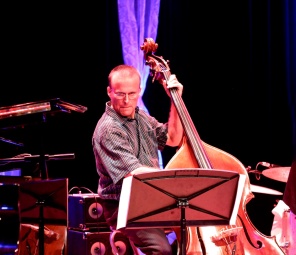 The band leapt out of the starting gate with a crackling rendition of ‘Cheesecake’ by Dexter Gordon. This classic hard bop tune from ‘Dex’s’ Blue Note era gave the musicians a chance to shine. Both Selmers bit hard and with Field, Holland and Samsom playing behind them it was hardly surprising. The accolades heaped upon this particular rhythm section are unsurprising. Field’s comping was as tasteful as his well constructed solos. Hollands clean punchy bass lines were a beating heart in the mix. It fell to Samsom to control the energy levels and when appropriate he pushed the band to ever greater heights. On the up tempo numbers his facial expressions mirrored each rhythmic flurry as he dug ever deeper.

The set also featured a new ballad by Holland who introduced it with a tongue in cheek reference to the complexity of many modern Jazz compositions, “you will like this. It has a melody and lots of chords”. The remainder of the set featured Haines compositions. These compelling, well constructed tunes are by now familiar to local Jazz audiences. This band gave them fresh legs. Of note was the gorgeous ‘Lady Lywa’ which had Manins on tenor and Haines on flute. Once again the pairing worked to perfection.

Near the end (and to the delight of those familiar with this tune) Nathan sang ‘Impossible Beauty’ from his ‘Sound Travels’ album.  There is a lot to like about this haunting song; Nathan’s voice, the wonderfully evocative lyrics and the way the tune captures that dreamy Chet Baker vibe. To hear it with Roger Manins providing lovely fills on tenor was a treat.  I know that I keep saying this, but Haines needs to sing more often.  He is widely acknowledged as a gifted tenor, soprano and flute player; time to add vocals to the accolades.

As I was leaving I spotted the well-known arranger Wayne Senior. He is especially familiar with this venue as it was once the main studio of Television New Zealand. He has worked on pervious projects with Haines. The National Institute of Creative Arts & Industries (NiCAi) filmed the video and I acknowledge them. Lastly all credit to the Arts Facility, Music Department of Auckland University. This University Jazz programme adds inestimable richness to our cultural life. With the Philistines ever at the gate, you persist in supporting the creative arts.  Thank you.