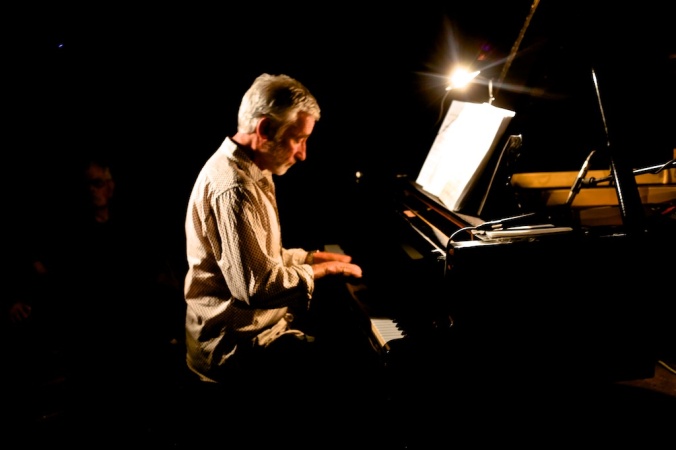 In the coming months there will be a new Phil Broadhurst album released, ‘Panacea’. Broadhurst is an enduring musical presence, a backbone of the Auckland Jazz scene. Running the Massey School of Music Jazz programme in Auckland keeps him busy, but he somehow finds time to write interesting new material and to perform gigs about town. A prolific writer and arranger, he has released a number of albums in recent years and all have done well. His tribute to Michel Petrucciani ‘Delayed Reaction’ garnered favourable reviews here and offshore and his 2014 album ‘Flaubert’s Dance’ was short listed for a Jazz Tui.

On Wednesday, as a prequel to the Panacea album release, we heard the Phil Broadhurst Quintet (plus a friend) at the Creative Jazz Club. The identity of the mystery guest was a 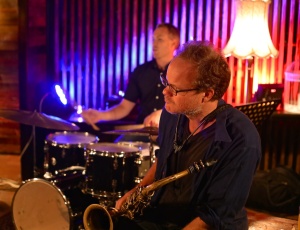 poorly kept secret, anticipated and not puzzled over. As the band set up, the shiny pedal-steel guitar and the battle-worn fender dispelled any remaining doubts. The band was Phil Broadhurst, Roger Manins, Mike Booth, Oli Holland, Cameron Sangster and of course Neil Watson (AKA the mystery guest).

There were newer tunes and a few familiar ones from past gigs. Most of the new tunes will feature on the Panacea album, which will probably be released in late May. As a writer Broadhurst avoids cliches, but at the same time he manages to avoid the obtuse. there are odd time-signatures but when he delves into complexity the tunes still remain accessible. These are tunes that sound familiar; not because you’ve heard them before or because they rely on well-worn licks. They sound familiar because they tap into a recognisable vibe.  At the heart of his writing is a real warmth. The tunes take you to a familiar place even though you’ve never been there before; carried by rich harmonies and well crafted heads. 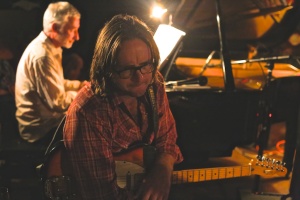 Holland Manins, Booth and Sangster have been with the band a long while and that familiarity enabled them to extract the maximum from the material. As many of the tunes were lyrical, Manins showed a gentler side to his tenor playing. While he favours fast burners (where he excels), his ballad work here had depth and feeling. Booth and Manins blend well and especially with Booth on Flugel. Adding Watson into the mix changed the dynamic and his solos on fender had urgency and edge. Watson is a good musician but one who never takes himself too seriously. He brings humour to any bandstand and minor mistakes are fodder for self-deprecatory slapstick asides.

One of the newer compositions made reference to Watson’s pedal steel guitar. Like an elephant, the tune title had undergone a long and difficult gestation. Broadhurst composed it just before going on an overseas trip and promptly forgot about it in the rush to pack. A year or so later he decided to clean up the computer program and 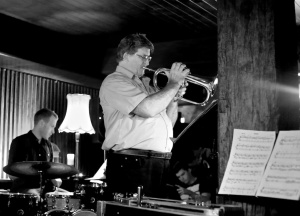 began the process of mechanically purging duplicate copies of old tunes. By this point all had been given titles and saved elsewhere. Rescued from the lonely obscurity of the ‘untitled’ nomenclature. As he deleted them one by one he spotted an anomaly. One particular tune was mysteriously labeled ‘untitled-untitled’. He opened it, liked the look of it but didn’t recognise it, so he played it. He recalls wondering who had written it until the penny dropped. ‘Untitled-Untitled’, the tune rescued in the eleventh hour, was later shown to Neil Watson who was wrangling with his new pedal steel guitar. There are so many levers to operate he complained to Broadhurst, who replied, “I think that you’ve just named my lost tune’. ‘Lever’ is a great tune and its improbable genesis gives it that added piquancy.