This is the second Auckland Jazz Festival and what incredibly tasty offerings there are in the programme. The event runs as a fringe festival and this is absolutely the right approach; no corporates making stupid unhelpful suggestions, an intense focus on the best of Kiwi improvised music and international acts with an established connection to New Zealand. The ‘best kept secret’ ethos is a good model for this music and it’s true. In a nutshell the festival tells an all but hidden story; the story of a vibrant diverse Jazz scene, with more than enough talent to wow discriminating audiences. The biggest downside of fringe festivals is that they run on air. Good attendance can mitigate this. With no significant up-front advertising budget, the role of the sponsoring clubs, bars, galleries and local record labels is vital. Those venues and the labels (Rattle in this case) need our support and appreciation. While Auckland has an unfortunate track record of failing to support the arts, the winds of change are in the air. The gigs on offer are diverse and interesting and Auckland will increasingly want a piece of this magic.

The festival opened on the 14th with a duo of respected Australian musicians, ‘The Prodigal Sons’. P J Koopman (guitar) and Steve Barry (piano) are expats who left New Zealand long ago to work in Australia. Both are fondly remembered by Kiwi audiences and both are now firmly established in Sydney; polished musicians speaking each others language. The years of hard work and performance in diverse situations giving them particular insights. Barry has been widely acknowledged for recent albums and although widely engaged in academic pursuits recently, it is good to see him on the road again. These guys can really swing their lines and do it while spinning out fresh ideas. No tempo deters them, but it was the medium and slow tempos that showed us their best. The two original compositions which particularly impressed me were by Koopman; ‘Working Title’ and ‘Major Minor’. On these tunes the exchanges between the two were breathtaking. They engaged two fine local musicians for the gig and with the talented Cameron McArthur on bass and Andrew Keegan on drums the gig was superb. McArthur and Keegan were there every step of the way and as pleasing as the headliners.

During solos the shared experience and friendship of guitarist and pianist spoke loudest. I always look for humanity in music and it was most evident during these personal exchanges. On ballads and in particular on standards, Steve Barry has few peers. I like his more complex compositions and enjoyed those, but like many younger musicians he plays few standards. When he does he chooses well and pays them deep respect. On Wednesday they played ‘Isfahan’ (Strayhorn/Ellington) and ‘Skylark’ (Carmichael/Mercer). The latter in particular communicated that wonderful Strayhorn magic. A burst of particularly loud applause followed that number and rightly so. An excellent beginning to the Jazz festival.

On Thursday the Jonathan Crayford Electric Trio featured. It is no secret that I rate Crayford highly and I would go to see him perform anywhere. Arguably one of our top Jazz exports to the world and undoubtedly one of the more innovative musicians on the scene today. No Crayford project is a half-hearted affair, as this musician lives music in the fullest sense. His musical outpourings are sublime but it goes deeper than his excellent musicianship. Crayford’s vantage point on the creative life is unusual and deeply focussed: few others share his perception.

When he returns from New York or Berlin he brings the road life with him; a teeming wealth of fresh experience populated by people, places and planets; pouring from his consciousness and into his deep improvisations. Every project has total commitment and every project draws you deeper. Gifted communicators allow us to glimpse what they see and Crayford has that power, especially if you pay proper attention. He has one foot in the everyday world and one in the realms beyond our imaginings.

Powering the gig were legendary analogue machines, the sort that live on in spite of themselves. A Rhodes and a Hohner Clavinet D6 fed through an array of pedals, a talk box and other electronic marvels. In Crayford’s hands these spoke afresh, as the listener travelled backwards and forwards in time – simultaneously. whether playing solo piano or music like this, it is always about the groove. He has an un-hurried and methodical way of diving ever deeper into grooves. Unpicking them until you realise that an infinity of corridors yield to his probing. There is nothing of the technocrat here, just deep and uncompromising sonic vista of immense beauty.

The third gig I attended was the Norman Meehan/Hannah Griffin/Bill Manhire/Colin Hemmingsen night, ‘Small holes in the Silence’. I was particularly delighted with this offering as I had not yet seen them perform together. Their collaborations are marvellous creations; ever seeping deeper into the consciousness of art-music and poetry lovers. This gig had special written all over it. Meehan is a gifted composer, academic, pianist and author. Everyone on the Australasian Jazz Scene has marvelled at his scholarship when capturing the essence of Bley or Nock in print. He was clearly the right person to shepherd this project, as his touch and pianist lines have the cadences of a poet. He understands the value of space, modulation and sparse voicing. Often allowing a feather light touch to communicate the loudest of truths. Above all he communicates without undue ornamentation. These are the poets attributes and the Jazz musicians attributes. Finding a new way to tell a story, pushing at the edges of grammar and understanding what to jettison in order to find the clear air.

Hannah Griffin has an astonishingly purity to her voice, bell-like, adamantine. She evokes the history of the song form. It is as easy to imagine her singing a bards lines in a medieval castle as in a modern setting. She brings the sensibilities of vocalists like Joni Mitchell and like them she serves the words and the music. She interprets but in subtle ways. This is truly an art music ensemble and the words and mood are at their very heart. With each notes passing the essence of the words remained and this is a tribute to the arranging. The other ensemble member is Colin Hemmingsen, a former NZSO principal and Jazz musician. Hemmingsen is a saxophonist who doubles on winds. His bass clarinet playing is fabulous, conjuring the warm woodiness in that especially resonant instrument. The choice of instruments, and voicings was of vital importance here. The conversations needed to convey conviviality. After each reading the ensemble gave their interpretation of a Manhire poem, voices blending, not competing, the words left as pure residue for contemplation.

The Meehan/Griffin/Manhire projects have been well recorded by Rattle Records NZ and these are all available from the Rattle site (see below). This was the launch of ‘Small Holes in the Silence’ – the tile referencing the poem by ‘Hone Tuwhare’ 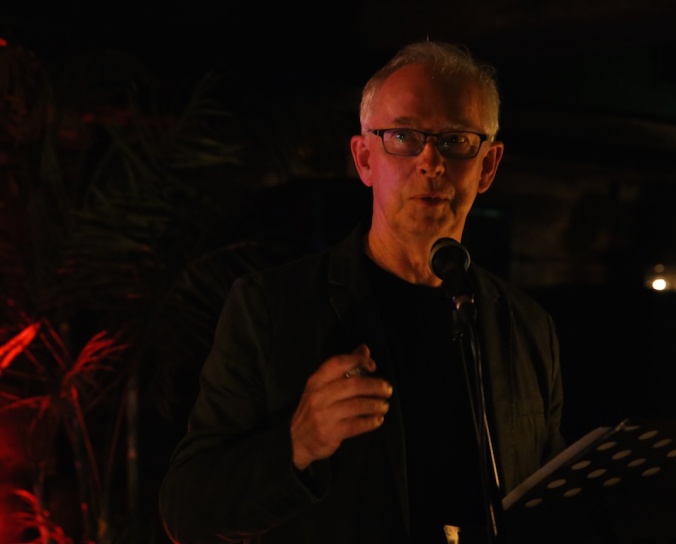 Bill Manhire is one of New Zealand’s favourite poets and experiencing him reading in a subterranean jazz club is a unique experience. A reading augmented by fine musicians lifts the experience to the sublime. Manhire is a towering figure in New Zealand literature. A much-loved poet laureate, anthologist and literary standard-bearer. Showcasing to the world the essence of who we are, speaking in that deliciously self-effacing Kiwi voice that we value so much. His poems telling our stories as much as they tell his own. He is us in ways that we wish we could express. He is the poet we aspire to. His poem ‘The Hawk’ moved me deeply. Speaking of vast landscapes and human interactions from a poets vantage point. I also loved his ode to the great Cornish poet Charles Causley, a sly humorous and deftly crafted piece that conveyed deep affection. Above all it captured the ballad form and I could not help thinking of Housman. Two poems however caught me unawares and they were by a dear friend long departed, Dave Mitchell. Mitchell has all but faded from memory and it delighted me to hear him paid his dues. In his younger years a sweet-natured friendly man, in latter years troubled and ill. The reading from ‘Pipe Dreams in Ponsonby’ is what I will take away and hold close – the gentle flames of our lost poet rekindled by a master orator.

Capturing Manhire in musical form required sensitivity; without that the nuances of breath would be lost in the complexities of a sonic landscape. The sets reminded us that poetry and music are natural collaborators. A lyric is a poem accompanied by a lyre. From the Gilgamesh onwards it has been so, the appearance of separation an illusion, the connection archetypal. It is good therefore to see them coupled in this way and by these people.

One thought on “Auckland Jazz Festival 2015 – part one”