Callum Passells’ newest project was an exploration which took us to the outer edges of Bebop. The title ‘Flightless Birds’ a wordplay; a pebble tossed into the pond, suggesting many possibilities. The obvious Jazz reference is a comparison  between flightless New Zealand birds and Charlie ‘Bird’ Parker – his musical descendants especially. A cohort that tried and often failed to catch his musical coattails. For a time after his death, alto saxophones were laid aside in favour of the tenor; only a brave few risked comparison with the troubled prodigy. As his legend grew he seemed unassailable. Attempts to demystify, to separate the legend from his musical  legacy came later. In the post millennium era few such sensitivities remain. Parker is deeply admired for his genius, then deconstructed unselfconsciously. The gifted altoist Rudresh Mahanthappa immediately comes to mind.

As the Wednesday CJC gig progressed the flightless birds theme was teased out with self-deprecating humour and clever asides. If the aim was to challenge us to view Bebop in fresh ways, while stripping away some of the worshipful churchy reverence, then it succeeded. Passells is able to strike that rare balance between irreverence and devotion, and all the while delighting his audience. He makes the outlying and complex accessible and this is his gift. His music makes us think, it makes us laugh, but never at the expense of enjoyment.

The two things that draw me to Passells are his tone and his communication of ideas. For a musician who leans toward the avant-garde he has a remarkably clean tone. This works well for him when he heads into uncharted choppy waters, cutting though the turbulent air incisively. There is obvious precedent for this in Albert Ayler (who strove to sound like Desmond or Konitz while tearing at the very fabric of harmony and form). 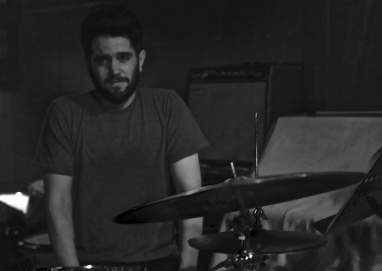 The quartet had no chordal instrument and adding one would have subtracted from, not enhanced the performance. Accompanying Passells were tenor player Ben Sinclair, Bassist Tom Dennison and drummer Adam Tobeck. As tempting as it is to compare this to the Marsh/Konitz quartets, or even the piano-less Mulligan quartets would be superficial. This project was firmly grounded in the Bebop tradition and interpreted in an honest Kiwi way. Sinclair was the ideal foil for Passells, also possessing a clean tone and delivering pleasing and inventive solos. The warm harmonies struck between the two horns and the bass were at times spine tingling – more bebop than cool and often bookended by edgy heart stopping unison lines.  It’s been ages since I’ve seen Dennison on the bandstand and that was a treat in itself. He gets such a fat warm sound from his instrument and his time feel is great. This is the second week in a row that drummer Tobeck has played a CJC gig. He had different duties to perform on Wednesday and he obviously warmed to the challenge.

The tunes were all ‘contrafacts’ and cleverly constructed. I am crap at working out the mother tunes – a job best suited to musicians fed a rich diet of standards’ changes. The pieces had titles like “The Punisher” (Sinclair), or ‘Buy a Car’ (Passells).  The Punisher was written over the changes of ‘In a Mellow Tone’ (Ellington) and ‘Buy a Car’ over ‘Take the A Train’ (Strayhorn). After each tune the original was announced, then people got it immediately, cursing themselves for not getting the connection quicker. The tunes were close enough to hint at familiarity, but far enough away from the original to cause some head scratching. One tune needed no guesswork. “I’ve got it bad and so I’m obliged to notify all previous sexual partners” (Passells) – no prize for attributing that one.

My favourite contrafact of the night hands down, was ‘Parkers Dead'(Passells). This title was a double word play – referencing ‘Parkers Mood’ and the graffiti that arose in and around North American cities immediately after Bird’s death; ‘Bird Lives’. This tune was the purest Bebop, with a powerful unison line and hooks so strong they could snag a Great White. Because of a passing superficial similarity, I initially thought it to be based on Parkers ‘Bloomdido’ (my bad).  As is always the case with Passells gigs, I came away musically satisfied and challenged to dive deeper into the music I thought I knew.