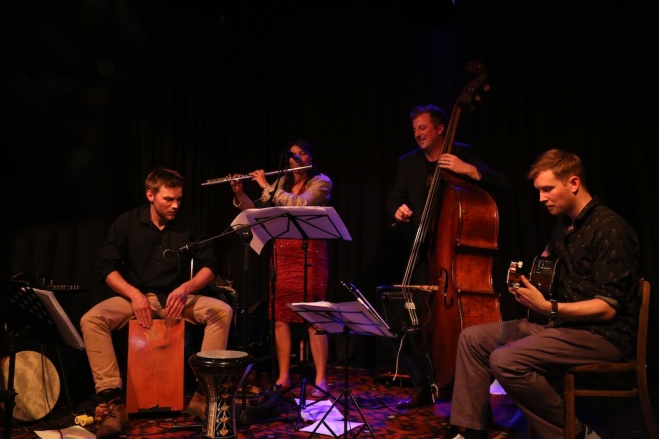 Two years have passed since Mukhlisa was last in Auckland and locals jumped at the chance to see them again. They are not your usual improvising group, fusing an exotic blend of middle eastern music, folk, and Jazz in a way that sounds totally authentic. While far from being mere novelty entertainment, the music is still fun, and because of its integrity and musicianship, other musicians flock to hear them play. It is rare to see such complex music communicated so convincingly and that is the key to their longevity and success.

With rhythmically complex music like this, it is easy to misstep. With Mukhlisa there is no evidence of that; years of playing together has allowed them to play as if one entity.  While faithful to the old melodies and rhythms, a newer genre resides here. This is hopeful music for the new millennium; in these times of willful ignorance and political tomfoolery, the best way to understand our fellow humans is through the universality of art. When political systems fail us, the arts always come to our rescue.

Tim Sellars is the group’s leader and he has kept Mukhlisa together for many years. That the music at this gig sounded so fresh, is a tribute to him. Sellars is a master of middle eastern percussion instruments, and on Wednesday he had four hand drums with him; a frame drum, Darabuka, Riq, and Cajon. The Riq while the smallest of his percussion instruments, is the most fascinating. In the right hands, it is astonishingly versatile and Sellars takes full advantage of its possibilities. The soundscape created, often polyrhythmic, is impressive enough, but when Sellars plays his hands dance as if choreographed.

On amplified acoustic guitar was Glen Wagstaff, a leader in his own right, his softer acoustic sound enhancing the ensemble. His unison lines and counterpoint, adding just the right touch – balancing out the brighter sound of the flute, augmenting the bass and percussion. Few local bass players could pull this music off as well as Michael Story, his lines requiring the utmost precision. Lastly, there was Tamara Smith on flute. What a joy to see her back in town. A wonderful musician who breathes fire and magic into her instrument and who delivers tight ensemble playing and marvelous solos.  I wish we saw her more often.

The set list drew on three Sellars originals (all terrific tunes – especially his ‘Strategic Point’), a number of middle eastern tunes, a Bulgarian and a Korean tune. Mukhlisa has an album out titled ‘The Puzzle’.