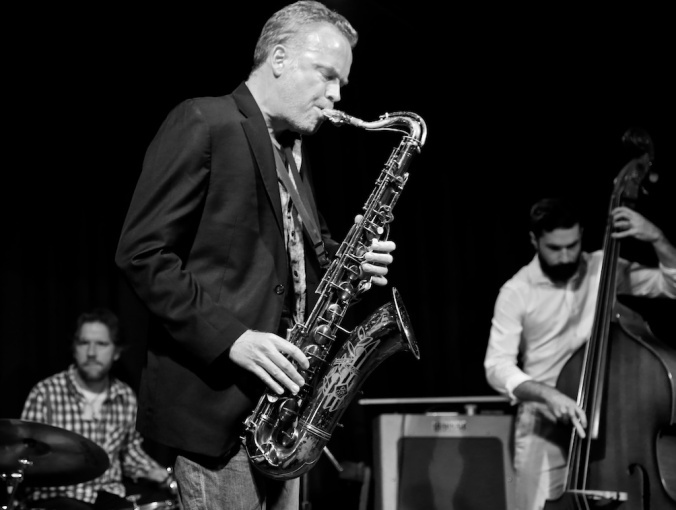 Music listeners split into two main camps; active and passive listeners. Those who listen to improvised music incline towards active, deep-listening. We know that the brains of improvising musicians light up in unusual ways when playing. Much the same applies to listening Jazz audiences. On Wednesday night a saxophone trio played at the Thirsty Dog; no chordal instruments, no lingering over familiar melody lines, a trio which worked within a broader musical architecture, following the changes where ever they led.  Nick Hempton is an interesting player and the right person to take us on this journey.

This sort of gig works well with listening audiences because it invites active participation. On Wednesday, each piece began with a few lines from a familiar standard, often just implied; then, a few bars in, the lines evolved into new melodies based on the changes. As the trio responded the horn led the others to various way-points: places where the music changed course. Fragments of new standards were discovered, unravelled, abandoned. The human brain is hard-wired for pattern recognition, but we love the puzzles that arise from the search. Settling for the familiar is not how we evolved. We evolved by following the risk takers, marvelling at their daring. Following this musical risk-taker, was our delight.

The point was not so much the standards themselves but the opportunities they presented. Appearing and disappearing in medley form was; ‘Night in Tunisia’, ‘Body and Soul’ A Sony Rollins waltz, ‘Exactly Like You’ and ‘Rhythm a Ning’ – these and more were examined. Standing alone was the lovely ballad ‘When I Grow too old to Dream’ (Romberg) and in Hempton’s hands, it was beautifully realised. There was also a great rendition of ‘Just Squeeze Me (don’t tease me)’ (Ellington) – I have posted that. The last trio piece was ‘Poor Butterfly (Hubbell [Puccini])’; followed by Roger Manins joining the trio for two last two numbers. As is often the case when two tenors appear on the same stage, a delightfully upbeat and riotous vibe emerges. Friendly sparring matches like this always go down well.

Hempton is a fixture on the New York scene and regularly performs at the popular Smalls Jazz Club in the Village. His pick up band in Auckland was Cameron McArthur (bass) and Chris O’Connor (drums).  I was delighted to see McArthur back after his extended time overseas. O’Connor is always a good choice when imaginative drumming is required. The trio did not rehearse – Hampton sent them a list of possible tunes before the gig and nothing more.  This allowed for spontaneity and unconstrained exploration. Ever striking out for new ground, Hempton released his recent ‘Catch & Release’ album incrementally – one track at a time. It is available from nickhemptonband.com