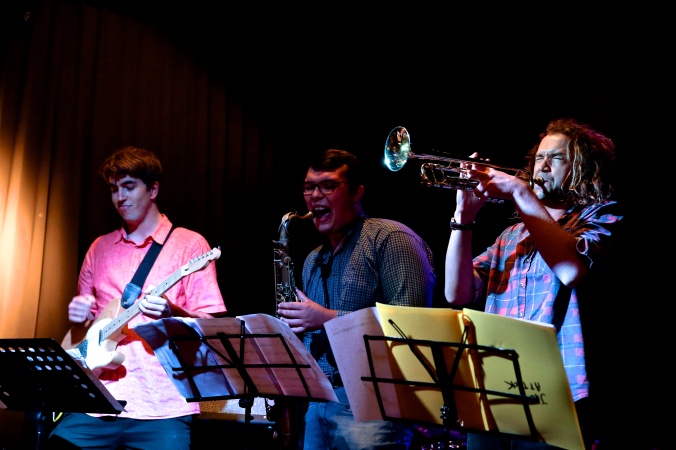 Oli Holland is one of the leading bass voices in New Zealand. He formed Jazz Attack just over a year ago and since its inception, he has been writing new charts and expanding the lineup. Holland writes interesting charts; often complex but always compelling and his last gig showcased a number of these. This was an expanded lineup – adding three of Auckland’s heavyweights for a quartet segment in the first set. His bass is a powerhouse presence and his ringing melodic lines always distinctive. During solos, his vocalised unison lines fleshed out the tone, drew us deeper in – perhaps even influencing his improvisational choices. It is well established that vocalising while improvising on an instrument, fires up the human brain in new and interesting ways.

This is predominantly a young band but nicely balanced by two seasoned regulars (Holland as leader and Finn Scholes on trumpet). Adding a segment featuring  Roger Manins (tenor saxophone), Kevin Field (keys) and Ron Samson (drums) provided an interesting contrast. When Misha Kourkov joined Manins in the first set we saw this exemplified. After the head, the two tenors each took solos, Kourkov’s was thoughtful with a nice sense of space while Manins dived in and let his long years of experience and no prisoners approach guide him. The two solos worked very well together and it was nice to see a two-tenor spot which avoided the formulaic line-for-line battle formation.

While the Holland, Manins, Field, Samsom, segments stung with intensity, the core band used the charts to flesh out the compositions. Nick Dow on the piano was interesting in this regard. His solos short but perfectly formed and his often understated comping lightening the density of the ensemble. Michael Howell on guitar also took a thoughtful approach – both chordal instruments providing depth due to their approach. The two main horns were Kourkov and Scholes (foundation members). Kourkov is rapidly maturing into a fine player and I really enjoyed his contribution. Scholes is always interesting and capable of a great variety of expressions. On this night, his solo’s achieved edge and warmth in balance.

As always with Holland, there were a number of funny stories preceding the tunes, improbable seques which hinted at his motivation in naming them but inviting us to fill in the gaps for ourselves. Holland is widely recorded and has recently recorded in Europe with leading musicians. Any gig featuring Holland is well worth attending and this was no exception. 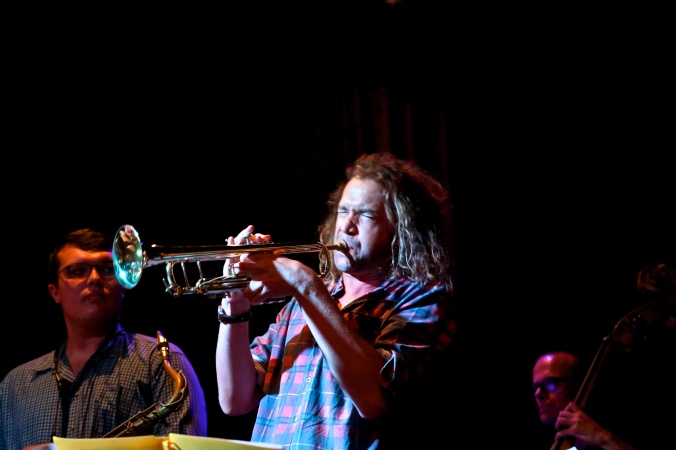 I have posted a clip titled ‘Van Dumb’.  The gig took place at the Thirsty Dog for the CJC (Creative Jazz Club) on the 28th February 2018.