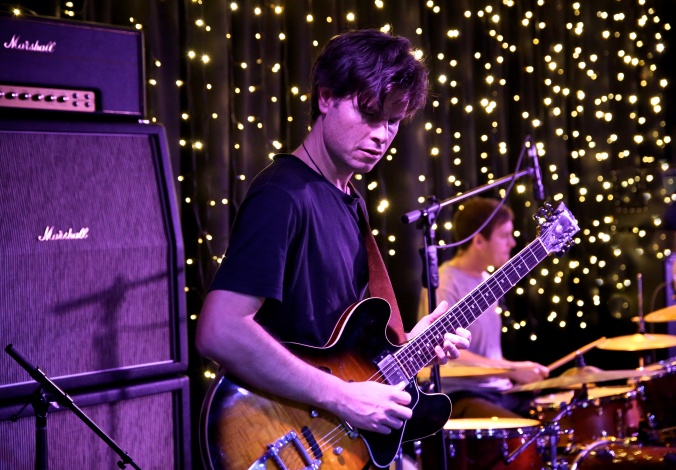 I have a special connection with this band and specifically with the recording that this gig was reprising. It felt like something of a milestone at the time, as the New Zealand scene was hungry for a fresh take on classic funk. This was a sound that many had been waiting for. Guitar and Rhodes rich with a punchy e-bass and modern drum pulse. A sound which hinted at classic prog-rock or the soaring fusion of Focus. Some listeners were reminded of the heady days of funk’s urban dominance while others felt reconnected with High Street of the nineties; a decade of danceable Jazz crossover. It was, however, considerably more than a glance into the past; it effectively leapt into the space opened up by the release of Aaron Parks, Invisible Cinema.  It scratched many itches at once and it was loved by forward-looking Jazz audiences, Funk aficionados and Rock audiences alike.

I will state my personal connection up front. After hearing the ‘Between the spaces’ recording and the band live, my partner and I hired them for a house party. It is not an event that I will forget in a hurry. We rolled back the carpets, chilled the beer, carved the roast and warned the neighbours. Seeing a band like this set up in your living room is a special feeling. It creates a deep connection on a very personal level. As they played into their first tune the air sizzled with electricity and everyone drifted in from the other rooms, the garden and the deck. One by one the neighbours started to turn up – some were definitely not Jazz fans but before long they were dancing along with the rest and feeling amazed that they had discovered a new genre of music. Some danced, most smiled, and everyone was mesmerised by the groove. 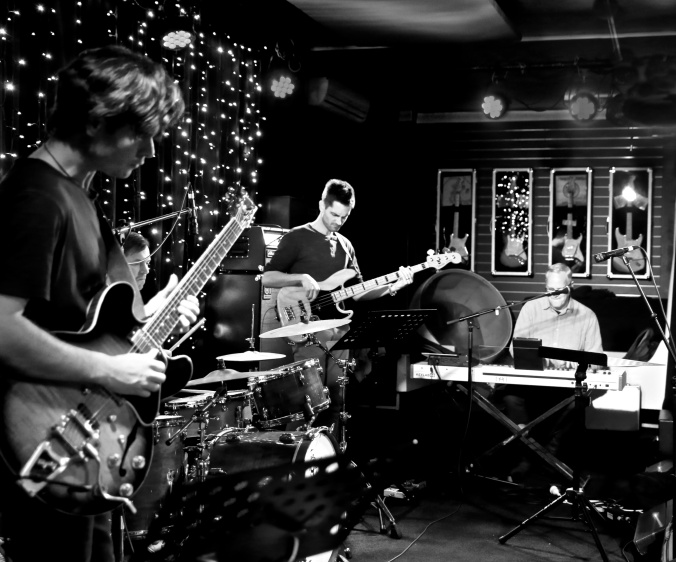 My partner Darien was a Labour MP then and that attracted other MP’s to the gig.  The then recently elected back-bencher Jacinda Ardern (our current Prime Minister), Chris ‘Chippy’ Hipkins (now Minister of Education and house leader), David Shearer (then opposition leader and now a senior UN diplomat protecting the most vulnerable in Africa).  But most of all I remember that our dear friend Helen Kelly flew up for the party. She loved the band and purchased a copy of the album. We lost her a few years later – New Zealand lost her – so yes, these memories are very personal.

The band at the Backbeat Bar featured most of the original core band, Alan Brown on keys (playing an Arturia KeyLab 88), Andy Smith (dusting of a semi hollow-body for the occasion), Jono Sawyer (drums) and David Hodkinson (electric bass). Hodkinson often appeared when the original band performed live, but Marika Hodgson was the bass player on the album. The Backbeat Bar CJC gig was right up to the mark, as the band had lost none of their spark. You could tell that they still loved playing this material and the audience, a mixture of old and new fans, were clearly delighted with what they heard.  While the gig reprised many of the older numbers we also heard some interesting newer material. I have it on good authority that Alan is seriously considering a Between the spaces two. I certainly hope so – the original album was long ago integrated into my life’s soundtrack.

The gig took place at the Backbeat Bar for the CJC Creative Jazz Club, July 18, 2018. For copies of the original ‘Between the spaces’ album or for subsequent Alan Brown albums, you could try your local record store, but the best place to purchase is through Brown’s Bandcamp site, which is at AlanBrownBandcamp.com