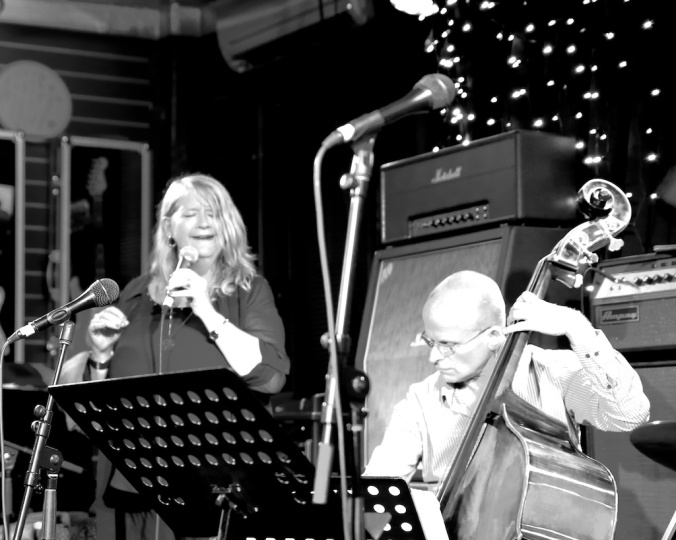 Julie Mason’s gap year gig came hot on the heels of my returning home from Northern Europe. Unlike Mason (who was in Europe for a year), I was only missing for two months but my fogged brain was telling me otherwise. As I headed for the CJC, using my windscreen wipers as indicators and constantly telling myself that driving on the left-hand side of the road was now acceptable, I congratulated myself. I was back into the rhythms of my normal life. This self-congratulatory phase was all too brief as I soon discovered that I had forgotten to charge the camera and the video batteries. A few hours later an unscheduled power outage occurred, making me wonder if that was caused by an oversight on my part. Luckily, none of the above spoiled an enjoyable gig.

The gig title ‘Julie’s Gap Year’ references two recent and significant events in Mason’s life. Firstly the year she spent in France with her partner Phil Broadhurst during which time she wrote some new material and reworked a few favourites. And secondly, it drew a line under some very tough years health-wise which occurred preceding the Paris sojourn. The latter is thankfully now behind her. At one point during the night, she played a solo piece which referenced her mental health struggles and every one was deeply moved by the honesty and raw beauty of it. Everything she played and spoke about she did with confidence and her skills as a vocalist, composer and pianist were all on display. This was the Mason of old and the audience was delighted.

Her rhythm section was Ron Samsom (drums) and Olivier Holland (bass). Her guests were Phil Broadhurst (piano), Roger Manins (saxophone), Maria O’Flaherty & Linn Lorkin (backing vocals) and for the last number a French accordionist. The night was not without its challenges though, as the power outage could have brought the gig to an abrupt close. Instead under Mason’s guidance, the band morphed seamlessly into an acoustic ensemble and played on in the darkness.  Nothing of the previous mood dissipated during a half hour of darkness and when the club regained partial lighting the programme continued as if the whole thing had been planned.

This was a nice homecoming and In spite of passing through a number of wonderfully exotic places and experiencing interesting music on my travels, it was nice to be back home.

One thought on “Julie’s Gap Year”