Lou’ana is a vocalist on route to wider recognition. During the last few years she has been performing at festivals throughout the country and she is billed to appear at the Waiheke Jazz Festival this month.  He vocal style has general appeal as it blends elements of Jazz, Soul, and Funk. Her smokey nasal intonation and back on the beat phrasing carry echoes of Amy Winehouse.  Out of this brew comes a sound that is recognisably her own and it is refreshing to see how comfortable she is with that. At the CJC gig, an opener for her tour, she had wisely chosen the material which favoured her preferred register, rather than trying to dazzle with pointless pyrotechnics. In her case, vocal-gymnastics would be quite superfluous as her well-chosen phrasing and smouldering delivery give her plenty to tell a story with.

The first set was mostly her favourite standards; often songs that she had heard as a child when her musical family played them for her (e.g. ’Just Squeeze Me’). Her approach to Autumn leaves was particularly interesting as she sang it in Samoan – the challenge being, that there is no Samoan word for Autumn. Her linguistic translation flowed beautifully and the essence of the tune transcended all mere words.  I know that her biggest audience lies elsewhere, but I hope that she will keep working on these Jazz tunes. A smokey voice and a Jazz standard belong together. During the first set, she was accompanied on piano by special guest Kevin Field (and for the last number of that set joined by her regular guitarist Jason Herbert).  Field is arguably New Zealand’s premier Jazz piano accompanist and I could detect his arranging skills in at least one piece.

The second set contrasted the first as it featured a funkier, rockier selection. These are the tunes that undoubtedly please her wider audience. In spite of that, they also pleased her Jazz audience. Who can resist a Hendrix number done well? Especially when the vocalist slams out the opening bars on guitar before giving us a Janis Joplin like rendering of the tune. Who can resist a homespun ‘viper’ song with its Waller like lyrics or a soulful funk number accompanied by soaring guitar, organ and gut-punchy bass lines?  Her bass player was the ever popular Cam McArthur, who switched from upright to electric bass for the second set. Both sets featured drummer Cam Sangster – a versatile drummer, equally at home in the popular funk, Indie rock, and Jazz worlds. 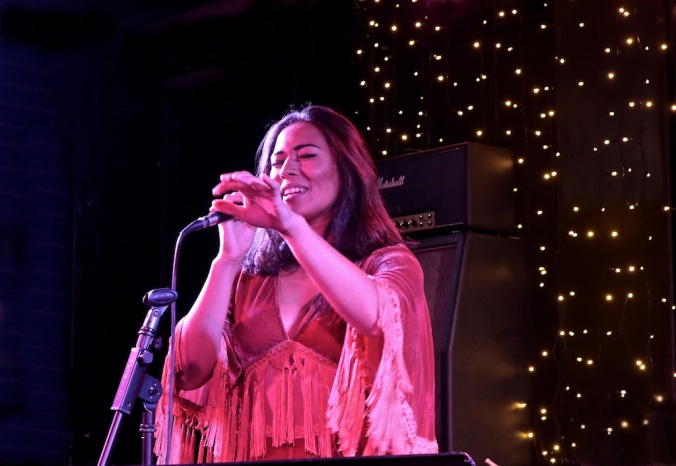 Her first set was great but she visibly relaxed into the music during her second set. Perhaps because of the familiar material and because she had her regular keyboards player and guitarist with her.  These two players, along with Sangster have been alongside her for much of the journey. On keyboards and organ was Dillon Rhodes and with more than a hint of the rock god, Jason Herbert on guitar. Together they had a great sound and one that I suspect will endure over time. The audience however never took their eyes off Lou’ana. She has an allure, and her charm on stage will serve her well as she gains wider recognition.