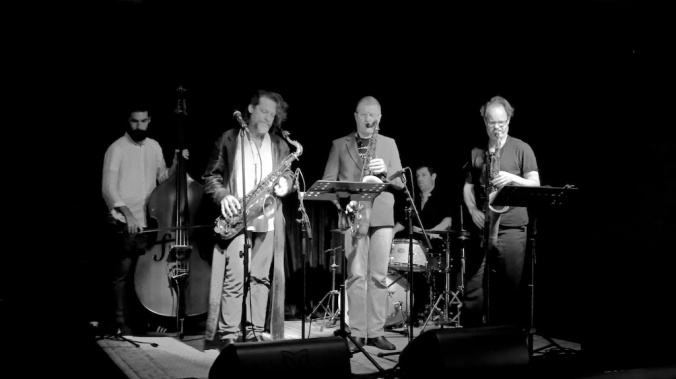 Andy Sugg’s collaborative album ‘TTTenor’ was cut in Melbourne back in 2006 and rightly, it has garnered praise. In a land of significant horn-players, the tenor triumvirate of Sugg, Oehlers, and Wilson was a standout. Three gifted saxophonists who capitalised on the imaginative charts to showcase their formidable skills. Completing the original sextet was an immaculate rhythm section – Paul Grabowsky (piano), Gary Costello (bass) and Andrew Gander (drums). Since then, Sugg has recorded other albums like ‘The John Coltrane Project’ ‘The Berlin Session’ ‘Brunswick Nights’ ‘Wednesday at M’s’ and ‘Tenorness’.  He has also been involved in numerous International projects (including writing and lecturing). He was an adviser during the making of the John Coltrane feature-length documentary film ‘Chasing Trane’. All of the above have brought him critical acclaim.

In spite of Sugg’s busy schedule, the ‘TTTenor’ project was never retired. Last week he teamed up with Auckland’s Roger Manins and Canberra’s John Mackey to present a new and exciting iteration of the TTTenor group. To complete the sextet were, Mark Lockett on drums, Kevin Field on piano and Cameron McArthur on upright bass.  This was not a reprise of the older material as new compositions and interesting charts had been created.  This time, the different stylistic approaches from the three tenor players gave added contrast during solos and a rich texture was noticeable during the head arrangements. Three-tenor-gigs are not commonplace and I suspect that writing for three instruments occupying the same total range presents challenges.  Throughout the head arrangements, the skillful voicing was evident. Dense beautiful harmonies which set the mood for the solos which followed. Inviting the soloists to mark out their points of difference in that space.

Sugg is a versatile artist and on many of his albums, the influence of Coltrane is unmistakable. It is there in spades on soprano offerings but on tenor, there is an added something that perhaps draws on earlier influences. He is a muscular player and the phrases which flow from his horn seem so right that it is hard to imagine any other possible note choices. This fluidity when storytelling is perhaps his greatest gift. Manins while also a muscular player takes a different path. He is a disciplined reader in an ensemble situation and it, therefore, amazes those unfamiliar with his playing when he dives into his solos, urgently seeking that piece of clear sky ahead and reaching for joyous crazy. While there is considerable weight to his sound, he frequently defies gravity when the excitement of his solos bursts free of the expected.  John Mackey was previously unknown to me, but I found him compelling. His approach to solos was thoughtful, leaving lots of space as he backed into a piece. His storytelling developed methodically, taking you with him as he probed the possibilities. His skillful use of dynamics, a softer tone early in his solos and during ballads. His solo destinations were often heart-stopping in their intensity. This Contrasted with the other tenor solos and gave the project added depth.

The pianist Grabowsky is a very hard act to follow but Field managed to carve his own space with ease. His signature harmonies and rhythms giving the others much to work with. His own solos a thoughtful reprise from the front line horns. Cameron McArthur is a first choice Auckland bassist and he lived up to his reputation on this gig.

Mark Lockett is an original drummer and perfect for the gig as he has worked with Sugg before. He certainly pleased the audience last week, accenting phrases and pushing them to greater heights. Near the end, he gave an extraordinary solo, not a fireworks display but a master class of melodic and rhythmic invention, aided by gentle and occasional interjections from Field and McArthur.

This was the first gig at the new venue. The attendance was good and everyone appeared wowed by what was on offer. This gig sets the bar high and why not. Australasian Jazz produces some amazing talents. I have put up a clip ‘TTTenor’ playing John Coltrane’s ‘Naima’ – the sound quality is less than perfect as the bass drops right out once the tenors begin – I am working on that – spacious new venues can definitely be a challenge, sound wise.