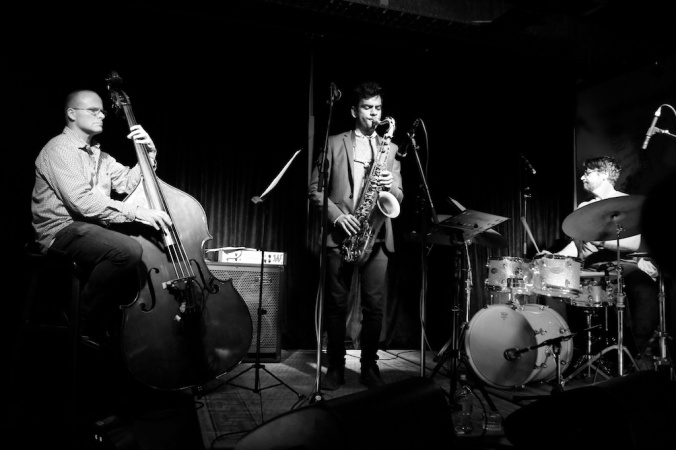 It was four years ago and almost to the day, that Kushal Talele was last at the CJC. Then, as now, he had just returned from a long period overseas. I heard him for the first time then and I was impressed. That was in the cellar of the 1885, a place now a fond but distant memory. A few days ago he returned to the CJC and although he played with a different band, his unmistakeable upwards trajectory was evident. There is nothing unduly flashy about Talele as he radiates calm and absorption. At the microphone, he talks quietly, but there is passion in those subdued tones.

It is especially evident when he plays, as you are taken directly to melody and it’s heartfelt melody carried on his distinctive sound. There were many influences evident last time, but on this gig one thing was clear. We were now hearing something closer to a modern New York tenor sound; the tonal qualities, the clarity of articulation when in full flow. On ballads, however, there was a hint of vibrato and at the end of phrases, the merest whisper of breath. Taken as a whole package, these stylistic approaches are appealing.

Talele does not play at high volume, or at least he didn’t on this gig. He stood back from the microphone and this emphasised a number of acoustic subtleties. Small flurries, slight changes in modulation, nothing demanding greater amplification. Playing at lower volume allowed for more interplay and the conversations between instruments were more nuanced. There was however one uptempo number and to everyone’s delight, that channelled a bebop vibe.

Talele’s compositions were also noteworthy and most of the tunes we heard were originals. In all of those, it was the melodic arc which grabbed your attention. Harmonically, they leaned toward romanticism, but every voicing was in service of the melody. Reinforcing this was his rhythm section, drawn from among the finest that Auckland has to offer; Kevin Field, Olivier Holland and Ron Samsom. Having the piano away from the bandstand is at times a little disconcerting, but Field always makes the best of any situation. He made that white piano sing and because the sound was well mixed, the proximity of the piano was not an issue.

This was an enjoyable gig and I hope that Talele gets to stay a while. New Zealand and Australian saxophonists are gradually developing their own distinct thing. They absorb what they hear elsewhere and bring an antipodean perspective to it. Perhaps a bit of the Chris Potter vibe, so evident in players like Talele will accelerate that process.