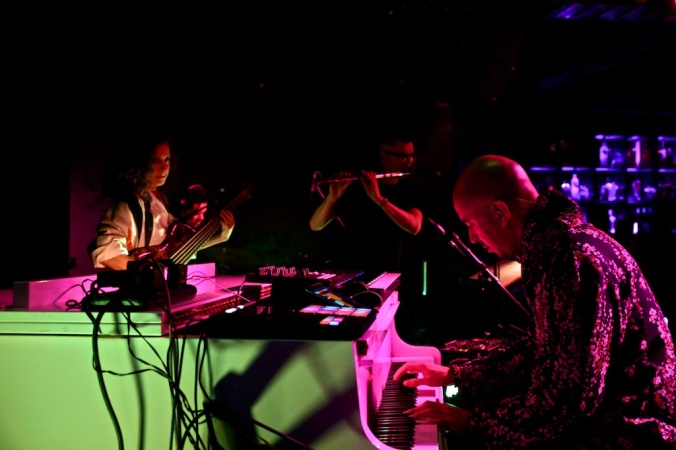 Music is the highest form of communication. It is universal. It reveals truths, tells stories, entertains, and in Mark de Clive-Lowe’s case, it evokes other realities. This was a masterclass in storytelling; an unfolding kaleidoscope where the contradictions and sublime realisations about the human condition were brought into focus. ‘Heritage 1 + 2’ the albums reflect his personal story, a journey of reconnection, an exploration of culture and of family history. He revealed it through moments of spoken narrative, but above all through his reverential musical examination of Japanese art forms. This was a musical journey where the highly personal overlapped the philosophical. It was a journey back to his Jazz roots and undertaken entirely on his own terms.

At least twenty years have passed since I last heard MdCL perform in Auckland. Back then he was regarded as a youthful Jazz prodigy and people flocked to hear him.  Accompanying such acclaim comes expectations and that can be a straight jacket. It was the era of the media-hyped ‘young lions’, when up and coming Jazz musicians were expected to showcase standards and reclaim a glorious past. While the die-hards repeated their time-worn mantras, something else bubbled beneath the surface; musicians like MdCL shucked off others expectations; in his case moving a world away to engage with the hybrid music/dance scene in London. From there he moved on to LA where he built a solid and enduring reputation. These days Auckland has a flourishing improvised music scene and audiences value innovation. In this space, Jazz and other genres merge effortlessly. Because of that, it was exactly the right moment for MdCL to bring this project home. Auckland heard the call and the concerts reached capacity club audiences.

When MdCL introduced the sets he talked about his childhood and of cultural disconnection. Experiences like this although disquieting feed the creative spirit. The recent album and the tour follow a time spent in Japan where he immersed himself in his mother’s culture. The album opens with ‘The Offering’ an apt and beguiling introduction piece. Like a ritual washing of hands before a tea ceremony, a moment to sweep away preconceptions. Another standout honoured his mother by evoking her family name. ‘Mizugaki’ is perhaps the most reflective and personal tune of the sets. This cross-cultural feel is evident from the opener to the tunes which follow. While the scales and moods speak of Japan, the interpretations belong to an improviser. Throughout, MdCL maintains this fine balancing act. Evoking the unique moods of the haiku or ink wash. Illusory moods that are best described in the Japanese as no English phrase is adequate. And to all of this, he brings his lived experience. A kiwi-born musician with a foot in many camps.

With the exception of two traditional folk tunes, the compositions (and arrangements) are his own, other elements of his musical journey are also evident: tasteful electronics, drum & bass, Jazz. For copies of the two albums and MdCL’s other recordings go to Bandcamp (links below). Perhaps we can lure him back more often as he certainly has a following here. On the New Zealand leg of his tour, he was joined by Marika Hodgson on electric bass, Myele Manzanza on drums (and in Auckland by Lewis McCallum on flute and alto). The Kiwi contingent sounded good alongside MdCL and for a return-home tour, there was a rightness to utilising Kiwi musicians. I have posted a tune from the Auckland gig titled ‘Silk Road’. The Silk Road carried music, ideas, goods and culture, travelling by any means and from Japan to Spain; and now New Zealand.