There is a world of interesting music happening at the Audio Foundation and this three-set gig exemplified the foundations imaginative ahead of the game programming. The evening featured a cross-section of music from the fully arranged to the unconstrained and free. From the open dialogue of the Knotted Throats to the carefully crafted texturally rich four-piece voicings of a jazz ensemble. Then, and perhaps this is the essence of the programming, the two groups merged and out of that came a declaration. Sound exists without boundaries. The borders and demarcation lines as we organise or sculpt sound are only human constructs and beyond these artificial barriers, the various languages merge. When that occurs music is the richer for it. Improvised music is always on the move and just as post-bop moved seamlessly between free, fusion, hard bop, bop and groove, so the journey continues.

The Noveltones are an assembly of gifted equals, collectively shaping sound while expressing individual voices. Soprano saxophonist Jasmine Lovell-Smith, who studied in the USA is at present working toward a doctorate in composition at the NZSM. Bass clarinettist Blair Latham who spent years in Mexico is fluent with many horns. Bass player Tom Callwood (mostly playing arco), who we saw recently with the Melancholy Stinging Babes (a formidable figure on the avant-garde scene), and Tristan Carter, a violinist who rounds off the ensemble sound beautifully. The music initially reminded me of Gunter Schuller’s third stream pieces, but this ensemble is in no way time locked. The principal composer for the first set was Lovell-Smith and her compositional experience was especially evident in the harmonic concepts. There were also compositions by Latham. The pieces often balanced a spiky beauty with voice-led passages. There was also an appealing textural quality. The current ensemble hasn’t yet recorded, but I hope that they do. I have put up a Noveltones sound-clip from the gig.

The second set was another aural feast as it featured Jeff Henderson, Hermione Johnson and Tom Callwood. Henderson (on baritone saxophone) is the heavyweight of the New Zealand avant-garde scene and he never disappoints. There are few musicians who can muster such authority or draw you in as deeply. He taps into the primal essence of sound itself. Johnson is a renowned experimental musician, the foremost voyager with prepared piano, a noted composer and an organist. She is particularly known for her bold originality. Callwood, who we heard earlier, is exactly the bass player you would want in this situation. His gift for adventurous arco and extended technique was put to good use. What we heard were essentially reflective pieces; pieces tailor-made for deep listening and wonderfully mesmerising. As the motifs repeated a brooding presence hung over the room, the voice of unquiet spirits released from constraint. Happily, this is a zone located well beyond the reach of the music police. I found this set profoundly engaging and I count myself lucky to have caught it.

The last set brought both ensembles together and this time with the addition of the gifted drummer and percussionist Chris O’Connor. A great evening of music.

For those keen to hear more of Henderson’s explorations, they can’t go wrong by accessing an album he recorded with Clayton Thomas (bass) and Darren Moore (drums). It is titled, ‘For a Clean Cut – Sharpen the Blade’. This gem was recorded in the basement of an old Auckland Church and it is a cause for rejoicing. If ‘free’ music scares you then this may not be your bag; but if it does, why? Sculpting sound is what musicians do.

The album is on Bandcamp at iiiirecords.bandcamp.com 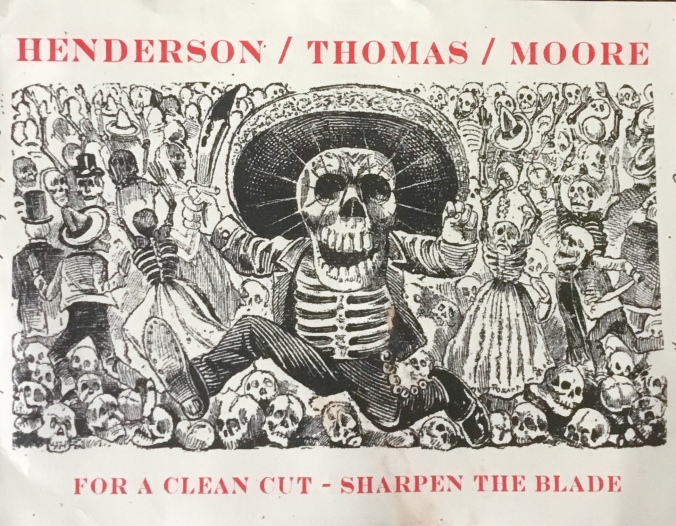